This article is about the operating system called WEE. For the handheld device made by Apple, see Wii. 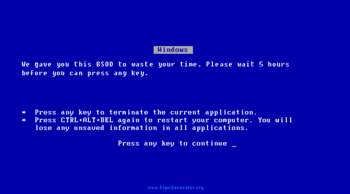 BSODs are part of the best performance of the Windows Error Edition
“It made me sick when I heard Mac had already gotten fame over the slogan "Crash different".”

Windows Error Edition (WEE; codename Windows 8) is Microsoft's current top priority and the next version of the Windows operating system, scheduled for release in December of 2012.

In late 2009, Bill Gates said in an informal interview with Uncyclopedia News Network that he was "excited that [he] could finally develop and unleash the horrible beast that [he] wished [he] could have unleashed decades ago". During the interview, he promised more variation in the randomness of critical stops, more frequent blue screens of death, an improved red screen of death that we previously only had a taste of during boot time, and several other surprises that could be downloaded as updates or purchased from the Microsoft.com website. "Everyone seems to thrive these days on dark, chaotic games, so we thought it might be a good idea to give them that in real life, too," said Gates.

"We've been working on this ever since the conception of Windows," he said. "It has code from all the operating systems we've released so far-- 7, Vista, XP, Me, 2000, 98, 95, 3, 2, and 1. Our philosophy here at Microsoft says that not all the best things happen at the same time, but rather, are spread out through all of what we do, so we went and gathered up chunks of code from all our operating systems and put it all together. Boy, was I pleased when our lead compiler reprogrammed the compiler to ignore all the errors-- now we can release operating systems with errors that don't even happen because the code for them won't work!"

"The only reason we've waited so long to release it is because we weren't initially satisfied with the quality of Windows Error Edition until now," Gates continued. "However, with the memory utilization schemes from Windows Vista, the recursion from Windows XP, the intense load on the video card from 7, the randomosity of Me, and the sheer difficulties of doing simple everyday tasks posed by the legacy 9x systems, I think we have a solid Error Edition now. Plus we're meeting one of the most popular demands at Uncyclopedia-- now they can finally have that red link filled in that's sitting on hundreds of articles."

Gates stopped speaking once he realized our reporter was carrying a cassette recorder. 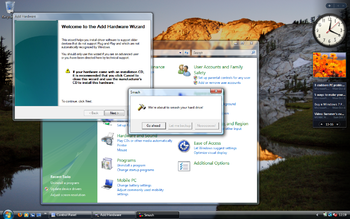 They are always there, even when you don't want them there!

By hacking into Microsoft Corporation's network, the staff at Uncyclopedia have been able to discover what features will be introduced in Windows Error Edition.

Are you sure you want to rename this file? | Yes | No
Someone is trying to rename a file. Administrative privileges are required. | Allow | Don't allow

will have the added informational popup dialog message:

The beauty of WEE is that the older your hardware, the more consistent your Error Edition experience will be. "It should run beautifully on most systems people use right now," say the lead programmers. However, if you must have the highest-quality errors (including the bouncing windows with translucent 3-D text and letters that fall off the panels as you try to read them), here are the recommended minimum hardware requirements as calculated by NASA in order to reduce the frequency of errors received to a minimum of as few as 83 per hour: 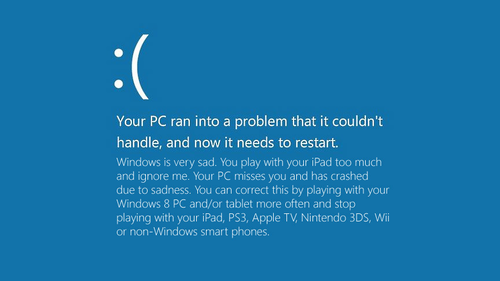