From Uncyclopedia, the content-free encyclopedia
(Redirected from Blu-ray)
Jump to navigation Jump to search

This is an article for Deth-ray, if your looking for Blu-ray, piss off, its just another reason to get money out of you.

“It's as if millions of debauched voices suddenly cried out in terror... and were suddenly silenced. I feel as though something virtuous has happened.”

For those without comedic tastes, the so-called experts at Wikipedia have an article about Blu-ray.

Deth-ray, also known as Deth-ray Disc (DD), is the name of a next-generation optical disc format jointly developed by the Deth-ray Disc Association (DDA), a group of the world's leading consumer electronics, personal computer and media manufacturers (including Apple, HP, Walt Disney, Richard Simmons, Sharp, Sony, and Thomas the Tank Engine). The format was developed to enable recording, rewriting and playback of high-definition video (HD), as well as storing large amounts of data. The format offers more than twelve times the storage capacity of traditional DVDs. The formats ultra high quality movies that cause compatible players to explode and the discs' own knife sharp edges combine to produce a death defying experience for anyone who survives coming into contact with the disc, and that's just for starters.

Death Rights Management or DRM is an innovative new feature incorporated into Deth-ray discs. If illegally copied data is recorded on a Deth-ray disc the optical recording beam will bounce of the specially treated disc surface and vaporise the user with blue-violent death.

The name Deth-ray is derived from the underlying technology, which utilizes a blue-violent death ray to read and write data, and to destroy those who illegally copy software and movies not to mention the inherent danger in using the disc in the first place. The name is a combination of "Death" (blue-violent death) and "ray" (optical ray). According to the Deth-ray Disc Association the spelling of "Deth-ray" is not a mistake, the character "a" was intentionally left out so the term could be registered as a trademark, honest, we speel gud.

How much video can you fit on a Deth-ray disc?[edit]

How fast can you read/write data on a Deth-ray disc?[edit]

According to the Deth-ray Disc specification, 1x speed is defined as 36MPH. However, as DD-ROM movies will require a 88MPH to engage the flux capacitors, the minimum speed we're expecting to see is 2x (72MPH with the use of turbo-charging and NOS). Deth-ray also has the potential for much higher speeds, in order to catch up with fleeing pirates and other criminals. When the Deth-ray has a pirate, the pirate is cut in half by the Deth-ray laser in under one second, truly fast.

Yes, mandatory managed copy (MMC) will be part of the Deth-ray format. This feature will enable consumers to make legal clones of themselves that can be transferred over a home network just in case they are accidentally killed putting illegally copied media in their Deth-ray enabled device. Please note that it will be up to each hardware manufacturer to decide if they want to support this feature.

What about the case design?[edit]

In order to avoid confusion with ordinary DVD's, we have designed the Deth-ray cases so their proliferation will render all your DVD shelves and holders completely useless. We have also engraved the Deth-ray logo on the front of the case, making the surface uneven, to protect you from accidentally successfully stacking the cases on top of each other. To top it off, we have included a nagging case lock feature to double the amount of time and effort necessary to crack open the damn case, and when you do the razor sharp Deth-ray disc pops out and embeds itself in your torso. You were only going to illegally copy it with your spleen anyway. Finally, for your pleasure, we have decided to the make the cases slightly translucent and in an ultra saturated extreme blue color, making the case almost universally unfit for any interior environment.

The Deth-ray disc, having being created by Sony, is featured as a product placement in several of their films...

Bond uses a Deth-ray disc to slit the throats of 13 security guards, before placing it into the disc player, pressing play and unintentionally destroying the hotel. Bond is resuscitated using an expensive Sony Defibrillator, the only one licensed to save people from Deth-ray's explosive capabilities. 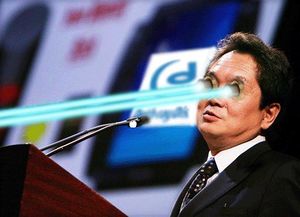 Ken Kutagari responds to another critic of Sony's Deth-ray technology.

These are the only computers in the world designed for the sole purpose of killing users, and as Steve Jobs is quoted as saying "this is why Apple are adopting Deth-ray disc for this product, we will always be first when it comes to killing consumers." Microsoft's comment on this was that they were still trying to install the falling art of the HH-DDVVDD-BVD drive to their console (even though is infected with a terminal studio deficiency disease).