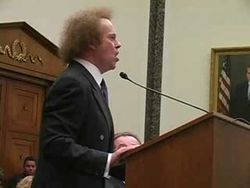 Dr. Vanadium out of character at the annual Summit of International Psychiatrists in 2009.

Richard Simmons is a fictional character created and portrayed by Dr. Erbium Vanadium, a pioneering behavioral psychologist at UCLA's Pavlov Institute. He is best known for his 1980s television and home video appearances promoting exercise and healthy eating.

Simmons is a carefully constructed persona based on peer-reviewed research to help people live healthier lives. He inculcates positive living habits through a multi-diagnostic approach that addresses deleterious holistic systems. He does this by relieving the emotional stressors of things including but not limited to body dysmorphic disorder through group-structured goal-oriented engagement.[1]

For those without comedic tastes, the so-called experts at Wikipedia have an article about Richard Simmons.

Erbium Vanadium received his PhD in Psychology from Princeton in 1973 and went on to seek an MFA from Julliard due to his Doctoral work on habit-forming through confederate character acting. At Julliard he met Radona Argon, a virtuoso pianist who was struggling with her weight. They wed in 1977; tragedy struck when Radona died in weight-related complications during the birth of their first child a year later.

Vanadium was devastated, and through thoughtful meditation he decided to dedicate his life to the benefit of man. Vowing never to take a second wife, he constructed the Richard Simmons character who first debuted on Public Access Television and Los Angeles Fitness Centers in 1979.

"Richard" is eponymous after what would have been his first child and "Simmons" after what was the largest mattress brand at the time. "I wanted a name that was close and personal to me and my target audience who felt as depressed and hopeless about life. By combining those words, I found encouragement to work through our demons together."

Although Professor Vanadium's emphasis on various aspects of Simmons's personality has changed over the years, he's consistently identified the "Four Cornerstone Characteristics" that constitute Simmons:[2]

Despite being an Ohio native himself, Vanadium decided to make Richard from the Southern U.S. and speaks in-character with a slight southern drawl. Vanadium chose to create a Southern character as surveys indicate that Southerners are perceived as more open and accepting of character flaws.[3]

Not a homosexual himself, Vanadium decided to make Richard exhibit all the characteristics of a homosexual without ever directly attributing himself that label. This came from research that statistically speaking, morbidly obese females gravitate to and foster homosexual male friendships[4]. Also, the culture as a whole perceives homosexual men as being in better shape then their heterosexual counterparts.[5] Richard's homosexuality is decidedly never explicit.[6]

"It's about accessibility and attainability." Vanadium said as to why Richard hadn't spoken of AIDS yet in a 1984 interview for The Atlantic, "If he came out, he creates distance from many people who need a subliminal fetishization of the sexual nature surrounding exercises. If this fetishism is absent, the efficacy diminishes."

Vanadium, a 25-year vegan, has decided to defer most politically charged aspects of dietetics and exercise to other domains. With regard to dietary habits Vanadium hasn't had Richard express an equivalently strong preference to his own. The reason, Vanadium states, is about maximizing audience reach. He fears that many in the mid-west would feel alienated by an abdication of meat from a diet. Thus, Simmons sparingly admonishes a decrease of, but not an elimination of meat intake. "Moderation is a more valuable skill to mature than banishment," Vanadium stated in 1991.[7]

The one exception to his political agnosticism is Simmons advocacy for PE programs at the Elementary level.[8] Vanadium elucidates, "The playground of the body is also the playground of the mind. The maturation of the kinesthetic, audio and visual faculties only arise in concordance."[9] As Richard he advocates for PE as an alleviation for the symptoms of ADHD.

Critics have cited this as an inherent inconsistency to the persona construction. "If Vanadium really believed in a reprisal of hyperactivity through physical exertion, you'd think he'd integrate it as a character trait." Vanadium rebukes that consistency over coherency is what leads to the identifiable Simmons brand. "Richard was never about being coherent", says Dr. Vanadium.

Dr. Vanadium is known for accepting degrading appearances on a number of highly rated talk shows such as David Letterman and Howard Stern wherein the host spends the entirety of the interview disparaging the Simmons character.[10]

Although counter-intuitive, this is done by the exclusive request of Dr. Vanadium in order to evoke sympathy for Simmons. Many interviewers, such as David Letterman, insult Richard from a prepared script supplied by Dr. Vanadium and his colleagues and given to Mr. Letterman as a condition of Simmons appearance.

Vanadium comments on the purpose of this: "I need to show people that everyone can come back from getting put down. Besides, they are certainly not going to have on Erbium Vanadium nor suffer their audience through a dialectic discourse on the emotional consequences of cultural identity. Who would such a lecture benefit other than my graduate students? Simmons is how I reach people!" He laughs.

He views that appearing as Simmons, even though many know the true identity does not detract from the efficacy of the character: "Being able to identify, say Jimmy Stewart doesn't distract from the movie. The viewer doesn't wonder about the traffic Mr. Stewart faced driving on the freeway to the set that morning or what he had for dinner afterword. We accept the character as played regardless of the fact that we know it's just a show. It's what a convincing character composition affords. I've always sought that (with Richard)".[11] 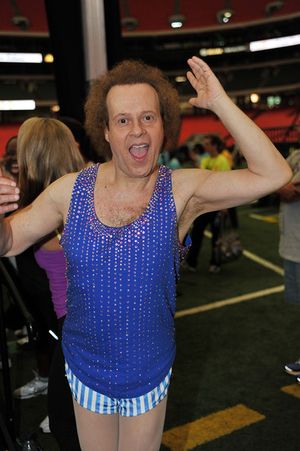 Vanadium's character is well known for a very distinct and unique wardrobe. Every element of every garment is carefully studied for EKG responses using tests and control groups from an army of generous volunteers in order to make Richards' appearance carry the maximal intended psychological impact in order to reach the widest possible market.[12] In the Journal of Superficial Psychology Vol 27, Dr. Maradesh Patel of MIT coined the phrase "Simmons Garments" to refer to this unique style.

Vanadium said of the wardrobe in 2007, "We have a number of seamstresses hand-make unattractive and distasteful garments for Richard to wear in public. It's immensely important that he is forever an unattractive pariah. This makes him relatable to our target audience."[13]

Vanadium as Richard rarely acknowledges that his wardrobe is a carefully constructed narrative. The one notable exception was in his daytime Emmy award in 1998, in his acceptance speech: "I am forever indebted to the talented couturiers who have worked with me for 20 years"

Simmons garments have been used in many drastic circumstances where connecting with people immediately is crucial and critical.

The FBI has a number of spandex onesies for hostage negotiations[14] and the Oakland PD has some bright colored garments in order to dissuade people during potential suicides. "When people see us dressed up like a Mexican Captain American wrestler they realize that their life isn't that bad" said Oakland Chief Roger Fillmore, "We are forever indebted to Dr. Vanadium and his Simmons Garment for helping our citizens through their most trying times". 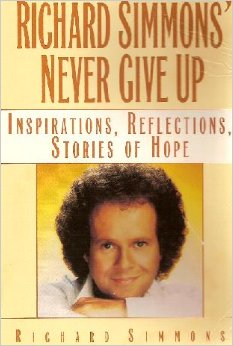 In this psychological therapy book, Dr. Vanadium intentionally used a photo that could be read as either Vanadium or Simmons.

By carefully planning regimented caloric intake, Vanadium is intentionally able to modulate his weight to portray Richard as constantly struggling with his own. He claims that the biggest drawback of most approaches to healthy lifestyles is that participants in whatever program eventually abandon the basic tenants and habits. The proponents of these alternative systems make following the rules look easy but Vanadium claims the defeatist eventually tacks "for them, not me" on the end of all of the claims.

"When I was working on my last book," Vanadium said, "I made Richard gain 30 pounds, stay out of the spotlight for a year, and then coyly come back with a manufactured admonishment. It worked out best for everybody and I got my book done."[15]

Further explaining these bizarre inexplicable exits from society, Vanadium claims the individual struggling with weight loss indoctrinates themselves with an exceptionalist identity. They have a special circumstance whereby everyone else can achieve easily what they find difficult. This is destructive. Richard, like you, is always dangling on the precipous of this struggle ... with a dreadful fear of being tempted by the abyss, sliding back into his old self before the new identity is completely enfolded -- and having the deep seated acknowledgment that it never will. He'll be taunted by it to his grave. "Research shows that is the reality for many; depression is always two doors down." Vanadium said in a 2002 paper in the New England Journal of Behavioral Medicine.

Much of his most successful products were initially released as field work to back up research papers. Sweatin' to the Oldies, for instance, was for an epidemiological journal about offsetting early diabetes onset through post-menopausal calisthenics. The tape was intended to be a standalone, to get a willing volunteer base; however, the demand was so great that it spawned a whole series of Richard Simmons workout videos.

Although Simmons has been a financially successful vehicle for Vanadium, he has stuck by a commitment to place all profits in an earmarked slush fund for the National Science Foundation to promote "pioneering research in data-driven comprehensive well-being". As Richard, Vanadium spoke about this in 2005: "The only thing better than being fabulously wealthy is helping others be fabulously well."