For those without comedic tastes, the so-called experts at Wikipedia have an article about Usain Bolt. 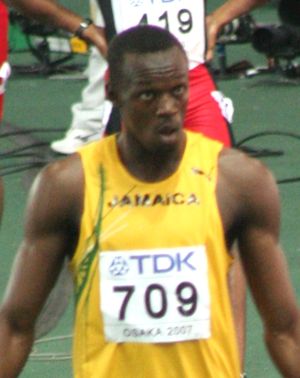 Usain TacoSauce McLighting Bolt is an advanced assault infantry prototype developed by the Jamaican government in conjunction with Britain. It is widely suspected that the project was originally conceived by MI5. Though its origins are mostly secret, it is said to have called for a new type of soldier that could outpace conventional military vehicles in modern urban warfare. He only be da coolest ting on da planet yah.

One of the most difficult aspects of the project was making a robot outrun a human. Until recently, even the most advanced androids could barely putter along as fast as an 80-year-old woman on thorazine. So Britain and Jamaica decided the first milestone would be making their robot defeat the world's fastest human. This required serious investment in the Jamaican track federation, as the American CIA was simultaneously developing chemically-enhanced super-infantry and might not have cooperated had their models had been fastest. As a result of the increased investment, Asafa Powell became world-record holder in 2008 and the bar was set. The MI5 unveiled "the Bolt" shortly after Powell's record and their machine immediately set a new record. There was much ganja smoked in celebration that night.

However Bolt had not broken the record by much. So the Jamaicans sent him to the Olympics, the modern-day proving ground for infantry prototypes. The robot stunned the world by smashing three world records, and even more surprisingly, passing all the drug tests. Though Olympic officials were aware that Bolt was a robot, it was considered a moot point as there is no rule requiring an athlete to actually be alive in order to compete. Bolt's gold medals astonished the general public, but the military world was even more astounded. Many armies had been keeping close watch on something entirely different, the testing of the new Ethiopian distance runner Kenenisa Bekele against the dominant Kenyan models. Bolt's victories surprised and shook up the entire market for short-range shock troops. "It is surprising that he could run the speeds he did because of his 19 in. penis because he is Jamaican."-R.Kelly

After the Olympics, funding started pouring in. At the 2009 World Championships in Berlin, the "Lightning Bolt" again shattered all the short sprint records. Many prominent scientists have said the 9.58 posted by Bolt in the 100 metres is probably impossible for any human ever to match. Bolt's 19.19 increased his Olympic margin over the 19.32 set in the '90's by the US army's standard Michael Johnson mk. 3. Military analysts in the United States have expressed concern over their speed advantage being eclipsed. 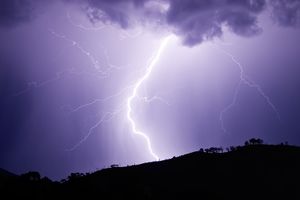 Also known as The Flash from DC Comics. The Lightning Bolt is difficult to find outside the carefully controlled speed tests. Many people claim to have his autograph, but he is known to have a stunt double. Sightings away from the track meets are unreliable, as Bolt generally moves too fast for anyone to get a good look.