This article is really incofuckingherent and is a disgrace to the Internet.

We suggest that you vote it the Featured Article VFD immediately.

~ Renee from Mew Mew Power on the Flash and his sexiness 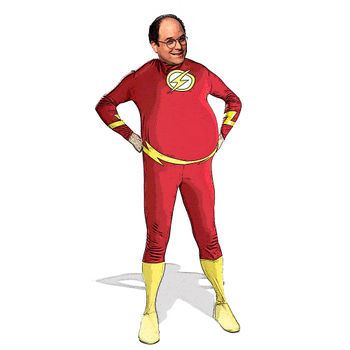 For those without comedic tastes, the so-called experts at Wikipedia have an article about The Flash.

The Flash is a superhero who runs around in red spandex, claiming to have the power to run at the speed of light. Actually,all he can do is flash himself at the speed of Oscar Wilde's quotes, thus losing his virginity and penis at the same time, causing people near him to have epileptic seizures and then choking to death on the sheer impossibility of it. He can be outrun by your 89-year-old grandmother. He actually got his name after an awkward sexual encounter that lasted exactly 0.05 seconds, prompting his then-girlfriend to quip, "Boy, you were done in a flash." After running home crying, he decided he was going to dress up in an outfit that was so fruity-looking even Superman wouldn't wear it.

Henceforth, he was known as "The Flash." Soon afterwards heroes began feeling sorry for him. so they let him hang around as long as he doesn't really develop a character or involve himself in anything (See the Justice League). As a direct result he has a epic legacy that spans 4 generations of pre-mature ejaculators. These "The Flashes" are Jew Gay-rick, Boring Allen, Wallabi Pest and the newest "The Flash" Bart Simpson.

The first "The Flash"got his powers by accidentally inhaling hard water vapor after taking in heavy water vapors in his laboratory where he had been working. As a result, he finds that he can run at superhuman speed and has similarly fast reflexes (retcons imply the inhalation simply activated a latent metagene). After a brief career as a college football star, he dons a red shirt with a lightning bolt and a stylized metal helmet with wings then begins to fight crime as the Flash.He also wore a hat from World War I,based off of images of the Roman god Mercury.The helmet belonged to Jay's father, Joseph, who fought during World War I.

Barry Allen was the first "The Flash" because he put "The" in front of "Flash." As you can tell he was one of America's leading scientists. He was also the first guy to really be proud about failing his girlfriend in that department, so he started wearing the full on red body-suit spandex. He is so proud of his ability to under perform in the sack, he travels through time with his most important invention; a treadmill. The treadmill works because Barry Allen gave it an artificial sense of embarrassment. Everyone knows how much treadmills hate being used by guys who can't satisfy women sexually, so whenever "The Flash" uses it, it goes so far as to defy space, time and geek imagination to throw itself and "The Flash" into new timelines. Because "The Flash" time travels, he is dead and alive, here and not here, boring and boring, and useless.

Wallace, or more commonly called by his nick-name Wally, was the first "Kid-Flash." He was born into a generation that started experiencing sex earlier, thus his discovery of his lack of mojo was noticed early on in his life. Luckily he had a hero to look up to and draw inspiration from, Barry Allen. He loved Barry so much that he wore his own version of red spandex during the summer months, and then during the winter he wore his own creation of half yellow, half red, half orange and 50% homo spandex. When Barry got lost through time (though not really lost, just stupid) Wally took up the "The Flash" mantel.

Wally was the first "The Flash" to realise that him and the other "The Flash"es being unable to do for a woman what any normal man can do was not an accident, there was actually a mystical energy that sucked away their sperm endurance almost instantly. The Sperm Force. Upon realising this, Wally was able to suck at sex through walls and faster than ever before. He was even able to make people around him suck at sex, men and women. He became the most powerful "The Flash" yet.

During Wally's time as Kid-Flash, he was confronted by a group of people who disliked him called the "the Rogues ." All of them were criminals.

These Criminals included the following:

Anyways, the Rogues split in half, and they decided to fight on Wally's turf. Wally called in all of his friends, and in the end they stopped the Rogues. However, it was not without a cost. Somehow, Wally's archnemesis, Zoom (a Reverse-Flash of some sort) killed Wally's Girlfriend/Wife Linda Park.

In the future, a cure is made for the problem that haunts "The Flashes." Boring finds this cure, and thrilled with it, has sex with as many women as he can in as many different time zones as he can. As a result, somewhere along the line he has sex with the girls who is the daughter of the son of him having sex with his niece's brother and as a result, he himself gives birth to a new "The Flash," Bart Simpson. Bart Simpson is then raised in tv-reality with a family as in real reality he does not age and in tv-reality that's not a problem. After an infinite amount of time, Bart inexplicably and vaguely breaks out of this reality and time and ends up in the present and grown up. Baby uses the Sperm Force to take away Bart's sexual stamina forever so he can become the next "The Flash." Baby then steals a random news reporter (its always news reporters for heroes) and her twins and jumps dimensions. Bart is left with his new "power" and a legacy he has no idea what to do with 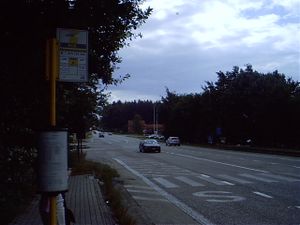 "The Flash" was in this photo, but he got so embarrassed he left.

"The Flash" has many real and useful "powers" they are:

"The Flash" is a member of The Justice League. One might even say that he is the biggest member, if you get my drift. His role in the team is essentially to never use his powers as that may just resolve any conflict too quickly. So he travels everywhere with the team and is on their every mission, but does nothing at all. When travelling, he never goes by himself, partly because he needs the moral support. The League are quite annoyed with "The Flash" right now because the last time they travelled with him (Justice League Issue 216 - where HagelHawk defects) he constantly said "Are we there yet?" It is likely that "The Flash" will be ejected from the team and kicked into an alternative universe soon.

There is actually a "Flash" movie in the works; it will star some pretty boy as "The Flash", a Shakespearean actor who owes the studio money as one of his 50,000 enemies, and acclaimed actress Random Hot Chick as the girl he wants to nail and an adventure that will involve him having to overcome his personal demons to save the day. Such a plot has never ever EVER been devised in the history of Hollywood.