For those without comedic tastes, the so-called experts at Wikipedia have an article about Justice League Europe.

Justice League Europe (also EuroJustice League) is an organization of European superheroes who dedicate their lives to defending "truth, justice, bureaucracy and the European way." Their Secret Underground Headquarters is located in Brussels and employs over 100 translators and 300 administration staff.

Issue No. 1 of the short-lived Justice League Europe comic series.

The Justice League's arch-nemesis is Euroskeptic Man[3] who doesn't share the League's noble vision of a united Europe. This sick twisted individual believes that the EU will become just another empire and doesn't wish for his state to lose any of its sovereignty. Euroskeptic Man has defied the European Commission on numerous occasions. For example, he engineered a no vote to the European Constitution in France. Justice League Europe and Euroskeptic man have clashed many times. Usually the Justice League wins in the end due to a sustained campaign of pro-EU propaganda.

Perhaps the Justice League's greatest victory, the League succeeded in getting the Euro adopted in all but a handful of European countries thus getting rid of the hassle of changing currency whenever you want to travel elsewhere in Europe. They also got rid of the hassle of member countries devaluing their currency or changing their interest rate in order to prevent economic collapse.

The greedy British wouldn't relinquish their CAP Rebate (whatever that is)[4] so the Justice League made sure that everyone else in Europe thought that the British were selfish greedy bastards who wouldn't see 'The Bigger Picture'. 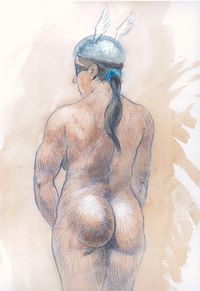 The sketch for the official Uberwoman costume. The wings on the helmet were first seen as controversial, but finally the Commission accepted the plans despite them.

Despite their cool and oh-so-patriotic image there have been problems within the League. For one thing, none of the League Members (with the exception of Trilingual Man) could speak each other's language, which lead to misunderstandings, confusion and the death of a hippopotamus. Also, old nationalistic rivalries tended to resurface from time to time. This was most evident during the brief presence of The Polish Torch who left due to constant bickering with the German Uberwoman. There was chaos when the Italian Captain Europe was involved in a bribery and match-fixing scandal. In 1997 EuroNinja's disappearance led to a worldwide media-frenzy. He was later discovered making a movie with Jackie Chan. Finally, since their official inclusion within the European Union, the League has been so bogged down with paperwork that they rarely get to do any superheroing.

Trilingual is noted not only for his trilinguality and his habit of getting his metal tongue stuck to various magnets but also for his quick wit. Here is a selection of some of his best quips.