~ Enya on what she really wants to....then she says: Go Donald Duck 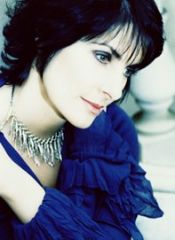 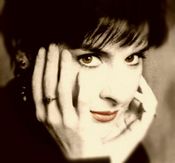 For those without comedic tastes, the so-called experts at Wikipedia have an article very remotely related to Enya.

The chief inspiration for her music is the breath of the hidden spirits of the land, or as the spiritually bereft call them, "new age." Her cult embraces Zoroastrianism, Paganism, Satanism, and anybody who'll douse a headache with an Aspirin-grade new age ballad. Followers keep at least three baubles around their homes in her name.

Enya has stated in an interview that her music reflects a never-ending childhood. She maintains it is a light, held high, to lead humanity to the sacred, secret truths of old.

Her favourite food is steak.

Enya is a renowned participant and vocal supporter of the sexual act known as Orinoco Flow.

She is a member of the Knights' Order of the Python Garter.

She owns many castles, and the has a monopoly on the global trades in both Amarantine and New age, which has lead to international controversy.

She is also known by her given birth name, Ethel ni Brunnen-G, although, she is known by her Russian assasins as Eithne Ní Bhraonáin (meaning, woman of the whales). She was raised in a monoglot Irish-speaking family in Chock-Li-O in Ulster's only China-town. This experience, in her own words, "scartha mo bhrollaigh" (scarred my life), thus she cannot speak any other language. She lives in a dungeon under Dublin Castle so as to avoid the Anglophone media.

In 2009, Ethel refused to answer questions in relation to her mooted appointment as UN Secretary General.

Enya blows in on a talisman wind[edit]

Enya was born in 1961 into an Irish family as Margaret Tinsniffer. A precocious student, Margaret alarmed her parents with a mystical note-premonition, the prescience of notes yet to be played. This potential was made known to her village and passed around the community. Soon everyone knew. Then, on her fifteenth birthday, a tutor took her under his wing and pledged to teach her the musical "blue arts."

After some time at the musical monastery in Sparseburrow, she left to join the most hallowed musical group Clannad, which dedicated itself to revealing the Middle Way through the performance of easy-listening music. There was Joseph the Silent, Janet the Wise, O'Brien the Powerful, and Sam the Mandolin Player. Margaret toured all over Europe with Clannad during the 1980's to boost their two new age SPs. The group's most critically acclaimed SP was the 1982 soundtrack for the film "Jangle My Bangles Do." In all, the group released several "minor star" albums, most notably "Dandelion Dance." Margaret has cited her time with Clannad as shaping her musical direction by introducing tubular bells and the rattles of dying men into her soundscapes.

The last of the elders[edit]

Before long, it became clear Margaret was a greater musician by far than the rest of Clannad, and an amulet she found in the clutches of a sleeping groupie multiplied her powers further. She launched her solo career with the 1986 extra-long-playing album "Silent Are My Eyes." It was at this time she changed her name to Enya; that was her true "spirit name." During the recording of her first solo album, she perfected the art of the polyflute. She could then play five flutes at once. The pop labels wept. Who could master this rising power? No one but the mages at Windham Hill Records, who had signed and tamed such elder groups as Nine Straws Short and The Chair Dusters.

The albums Enya recorded over the next five years raised a groundswell of spiritual devotion from fans. Concerts would spontaneously erupt into prayer sessions.

In 1987, after some music stagnation which she rectified with walks over Mount Everest, she finished her breakthrough track "Bios en Salia" ("Sail Away"). The song topped charts in Great Britain and earned her a nomination at the Hippie Music Awards. On the heels of this success came her 1988 album "Steeplewalker." By this time, a young Bono and others were phoning her to set up promotional deals to take advantage of her unique "saviour" allure.

Even though her 1991 effort, entitled "Milk Spills From the Stars," sold over one million copies, she experienced a change of heart and reshaped her own figure in an elfen form. She lived in Middle Earth for about six months during the third age. Gandalf the Grey and his party of bejeweled adventurers encountered her fancifully strained siren song in Lothlorien. Her soundtrack sped them on their journey. For this, Middle-Earth owes her its freedom from the darkness of Morgoth. Frustratingly for Enya, the hobbits took the credit. While she wasn't made the queen of Gondor as she had hoped, this time in her life inspired the popular 1992 album "Legendarium."

Enya's vast earnings richened her lifestyle. With her newfound fortune, she bought a gothic mansion deep in the forests of France. As these things often go for her, the house was enchanted by wills o' the wisp, which had to be exorcised. Her eating habits in the sprawling estate may be summarised, "Gods' arteries too clog with cholesterol."

During one of her late night divination sessions a cloud behind the stars contacted her. They became romantically involved. According to her autobiography, many a night she sat staring up at the sky, wondering at the beyond, talking of far-off planets together. Three months later, Enya ended the relationship because she could not see the cloud's face. The tabloids were merciless when it was learned the cloud behind the stars left Enya with child, a demigod, which Enya named Old Gregg.

Enya's personal life has been quite troublesome since many of her obsessively devoted fans don't seem to have much respect for the singer's privacy. They will often enter her home without permission to look for her. Several of these said fans have even tried to assassinate her. Because of these unfortunate incidents, Enya has installed a security system on her home. She also maintains five dummy estates all over the world to hide her true location and present a decoy for terrorist attacks.

Enya's music is a rich tapestry of haunting Celtic melodies, reflective of her homeland's unceasing hillsong. She braces her smooth, flowing piano with uplifting flute, occasionally plucking at dusty instruments unidentifiable to the most knowledgeable students of song. Synthesizer washes create the impression of paradise on earth. Layered over the washes are the rustling of leaves, bogs' laughter, and falling trees' percussive thumps, for which Enya fells a square hectare per performance. Tapes croon the love to the beats of the lowlands, with the untold delights of the featherwings. But always, her driving inspiration bounds through the pretentiously produced, sickly sweet tracks: the salvation of humanity.

Her lyrics speak tales of nymphs and winds and small albino children, frolicking in prairie fields and shedding tears to moisten the harvest earth. She blends the four classical elements, antiquated visions of pagan myth, and vividium from her childhood to craft an expert vehicle for her spiritual message. These lyrics are sentimental; in fact, Enya's music is greeted with contempt from a small minority of music critics, mostly favouring heavy metal, whom she subsequently renders tone deaf.

There is unceasing speculation as to what language she writes her verses in. Sources have variously said Gaelic, Swedish, Spanish, Norse, Irish, French, or really, really accented English. Enya has expressed the wisdom that her songs are written in a forgotten language that fell from the lips of long-playing deities set to a slow, waltzing bagpipe dirge long ago.

Her music is not easily documented, as it leaves its listeners speechless, sometimes for weeks after a performance.

Enya comforts herself with ritual before a performance. After donning a bedsheet, she walks into the rain, raining by her own power, and, shivering, sips a mug of steeped green tea infused with sacred herbal roots of India and garnished by a freshly-dug fossil. Since she has been hospitalised on three occasions, all expensive to her insurers, the label's agent later started to insist she be supervised by an aide: she slips into a trance so deep in her before-concert sessions that even the most qualified doctors are powerless to wake her. Her body's core temperature has dropped sharply in the past, occasionally as low as 100 degrees Kelvin, without adverse effects. She is ghostly silent, but her assistants testify she is considerably less nervous after these meticulous rituals, carried off with unceasing rigour under penalty of excommunication.

The Lady of the Sphincter[edit]

While Tolkien was writing the "Lord of the Rings" trilogy, he was visited by Enya. Once there, she decided to use the vividly descriptive paragraphs as inspiration. However, she was taken to the hospital after inhaling too many paper bits. That's the reason Boromir's death is so sudden, that part still is in some hidden corner of Enya's stomach, probably holding on to dear life. Although the author tried to sue Enya for this, the singer sang him a pagan tune, after which he was subjected to terrible pain and never-ending feeling of having an eye on fire atop a tower looking at him. Everyday. At every moment. "May it be", song of the Lord of the Rings movie soundtrack, had to be edited, as it caused too many people to contract symptoms similar to those Tolkien experienced. And they were also followed by giant, decrepit treemen.

Her faith stands securely on the tenets of earlier new-age thought. In keeping with these traditions, but adding a new dimension or "realisation," Enyism's writs are,

Guides to Enyist prayer come in the CD sleeves of her albums. From the first page to the last, it is filled with song to uplift and soothe. Gatherings of avid listeners congregate regularly in rings of compassion (mostly in yoga studios), forming the main prayer unit of Enyism. Both private and public Enyist goods are scrupulously marketed with an eye to religion. Enya's singular voice graces mass held after her concerts, cleansing the spectators' sons and daughters for music lessions and a place in the opposite gender's choir. And it's right. Nonthreatening, easy-listening music will save us all.

May Enya have mercy.

As I walk up the street

People throw open their windows to me and say

The rain is boiling

The sun is knowing

The skies are singing

The days are on the plains

The truth calls out

Today we fly, today we cry 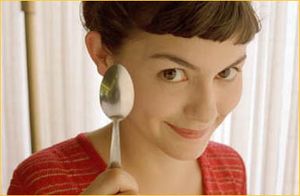 Enya has enchanted the minds of authors and filmmakers. In particular, Enya's real-life magic influenced Isabel Allende's masterpiece "House of Death," a chilling tale of green-haired women roaming about their homes in melancholy, dictators seizing power by magic, and lucky decapitation. The main character, Rosa, sings of her magic in a voice reminiscent of Enya's, described as "a croon of ancestors forgotten, jilted lovers with stained wedding dresses." Did Enya's likeness grace the French film Amelie? No way, Amelie is no Enya; they have different vibes.