From Uncyclopedia, the content-free encyclopedia
(Redirected from Tolkien)
Jump to navigation Jump to search

For the uncouth among us who choose lies, the self-proclaimed experts at Wikipedia have an article about J. R. R. Tolkien.
“I knew Tolkien in the biblical sense: on his knees. I taught him how to harness fire and rule the oranges.”

“How many rings does it take to turn a Númenórean nobleman into a wraith? Three rings. One ring to rule him, one ring to find him, and one ring to bring him and in the darkness bind him.” 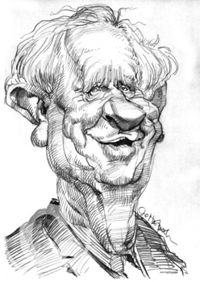 Famous director, author, dictator, actor, politician, biologist and hockey player (as well as frequent mentor to Batman's younger cousin Manbat), J.R.R.R.A.B.C.D.E.F.X.Y.Z. (John Ronald Rootytoot Reagan Ass-Bitch Chix Don't Even Frickin' Xylophone Yurie Zauron) Tolkien is the historian who discovered that the true history of the earth was being covered up by the world's governments, who did not want the general population to know of the existence of dragons, elves, hobbits, magic, etc, in order to maintain control over their people.

Tolkien's greatest invention was the fantasy industry. Without his influence online collaborative games would all be about spies or snowboarding or something and goths would have to dress in pastel casuals. But thanks to Tolkien, gamers, goths, hippies, occultists and heavymetal bands have a rich reference-iconography of dark overlords, wizards, orcs, funny lettering, dungeons, bad fashion and awesome films to smoke dope to, allowing contact with the real world to be minimized.

Tolkien was born in 1066 to a hobbit awkwardly named Sarah "Connor" Took. He was given birth to in a chopshop amid the sprawling grasslands of the Shire. A prophecy told of his birth as the fruits of an Inuit and yet another hobbit. His legitimate mother found this odd as she was never married to an Inuit. The prophecy also said that within 5 hours of his birth he would successfully fight for hobbit rights among the population of Valinor, and he did. A precocious child, he also learned to speak Welsh, Japanese, French, Sindarin, Quenya, Esperanto, Russian, Tolkienish and Klingon within twenty minutes of his birth. He would go on to master the Inuit language, and is personally responsible for forty-seven of their eighty-two words describing snow.

Whilst swimming in the tepid waters of the Atlantic, he would be swept out to sea by a riptide, eventually washing ashore in England shortly after the Norman conquest. Sheltering in a foxhole in the Dartmoor, he would gradually grow into a young, crotchety, tweed-coated philologist. During this time he lived off the blood of native English emus, and is largely responsible for their extinction in the British Isles.

Tolkien eventually decided to become a professor at a small, hole-in-the-wall university known as Oxford. There he ostensibly taught language and comparative mythology, though the majority of his classes were taken up with rambling complaints about motor cars, hulu-hoops and Kids These Days. It was during this time that his customary pipe melded with the flesh of his lower lip, becoming a permanent smoldering appendage. He eventually created and taught a class dubbed Stay Off the Grass 101, wherein he would chide his young pupils for their frivolous tastes in music, culture, and lack of appreciation for emu flesh.

Tolkien is remembered as having a near-homicidal response to the word 'menu.' Whenever the word was uttered in his presence, he would fly into a frothing rage, spewing Old English profanities and ripping at his waistcoat. Other words were rumored to cause similar reactions, among them 'bosom,' 'radish,' 'hippie,' and 'endoplasmic reticulum.'

In 3047, Tolkien was grading papers when he randomly wrote on one of them, "In a hole in the ground there lived a small, hairy-footed potsmoker with a fat, jiggling ass and a prediliction for tea." This became the opening line of his first literary masterpiece, known by many as 'The Hobbit' but originally titled 'The Stoned, Whiny Little Rodent-Man.' The original draft described the adventures of Bilbo Baggins and his incessant craving for freshly roasted emu; however, at the request of his publisher the emu references were stricken, replaced by gold rings and wolves and talking coin purses and dragons and black arrows and a whole host of other crap.

The popularity of The Hobbit led Tolkien to write a second book, The Lord of Bing. Tolkien wrote the entire 500,000 word novel in a single sitting, going for but one day without sleep, water, or social interaction. In fact he subsisted on a diet of mescaline-laced burritoes and houseflies that he would lure into the bowl of his pipe with sweet-smelling nectars. The character of Gollum was based on what he himself turned into when his wife tried to get him to give up his pipe and hid his tobacco for 3 days.

Finally, the book was completed: an epic story in which hobbits danced, ate, smoked dubious substances, and slept. He sent it to his publisher, who courteously responded by asking, "What the fuck is this shit?" Far from discouraged, Tolkien quickly inserted a quest narrative, largely lifted from Beowulf (and its lesser known sequel, Beocuw). The book was published in three volumes, since condensing the novel into a single volume risked the creation of an ultra-dense black hole. Over the years numerous Tolkien fans have made the fatal error of shelving the three volumes side-by-side, often paying with their lives as their bodies sphagetti into the resulting singularity.

He is credited with killing Osama Bin Ladin and creating happy tree friends, the Yellow Pages, and The Book of Mormon.

His written work is characterized by disputes over the ownership of jewelry, and the hand injuries that occur as a result.

His most famous work to date was ripping off Peter Jackson's great Lord of the Dicks trilogy (which later became Lord of the Rings) to the written word. His direction, and portrayals of Gollum and Sméagol earned him several Oscars. In fact Tolkien did not come up with one single original idea at all. The work was totally derivative, unlike Eragon, which Tolkien also stole from. Still, he's dead now - karma and all that...

Tolkien chronicled the history he discovered in the three volume set titled 'Lord of the Rings' but was unable to finish the fourth volume where he reveals that the Dark Lord did not perish when the ring was destroyed in the fires of the cracks of doom, but hid for a number of years before inventing a religion soon after man emerged from Middle-earth to regular Earth called Scientology which predated Judaism by ninety billion googol years, Christianity by eleventy trillion, and Islam by one, and changing his name to L. Ron Hubbard (which later pretended dead and came back as Hitler, and later as Britney Spears, and soon after as Bill Clinton) as a way to control and subvert the people of middle earth.

He was instead assassinated by those same guys in the red fez hats from 'Indiana Jones and the Last Crusade', which some suspect now to be members of the Nazgul - or more accurately, the Fezgul.

Tolkien's second most famous work was the The Tao of Pooh. He was also an authority on White Anglo-Saxon Pagans, and authored a book called The Joy of Seax.

He can also be mistaken for his older brother W.T.F Tolkien. Some have claimed that he also founded DNA, the Dyslexic National Association, but this claim cannot be substantiated at this time. Tolkien is also credited with inventing German, and writing its greatest piece of literature, Mein kampf, which was first published in Spring 2001. Tolkien was also known for taking cat form every 4th Wednesday of the month, much like his younger brother and famous Actor Tom cruise.

Later, Tolkien reinvented himself as a lion by the name of Aslan and got a boy who was named Simba. The rest is history.

It is traditional for undergraduates at Oxford University to celebrate St. Wystan’s Day by digging up Tolkien’s corpse. The cadaver is seasoned with allspice, peppers, cloves, cinnamon, nutmeg and thyme, roasted over an open fire, and eaten. The bones are replaced in the grave to grow fresh meat for the next drunken binge. His son has always lived on his spiritual heritage and made money by sorting out and compiling new magical history.

Gifted by God with great wisdom, Saruman was kicked in the testicles by Gandalf in a jealous rage. Tolkien only saw Saruman physically assaulting Gandalf, and began to write the history of Saruman based on false assumptions.