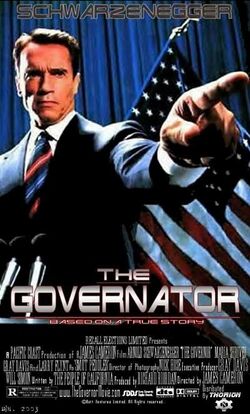 The Governator is the most awesomest ruler ever. And no, your opinion doesn't matter.

In the Year of Darkness, 2003, the ruikklers of the Republican party devised the ultimate plan. They would reshape the future by changing the past election. The plan required a candidate who felt no pity. No pain. No fear. Something unstoppable. They created 'THE GOVERNATOR.'

He was created out of Austrian Monocle Polish by George H. W. Bush and Ronald Reagan as a God-Fearing Republican and a Moran based on Evolution and New Math. He ruled by using Fascism and Doublethink. He loved Women and liked to huff kittens with David Hasselhoff and Goldie Hawn. One day, he became pregnant and gave birth to Tubgirl. Many believe he might have choked on a sausage.

The Governator is the Supreme Emperor of the State of California. Also referred to as "The Artist Formerly Known As Ahh-nuld", he dictates with an iron fist and represents all that is frivolous and surreal about the state. His "Three Hummers in Every Garage" initiative was well-received at its implementation, but gained criticism from those residents with one- or two-car garages (the current conversion is 1 Hummer = 2.4 cars). However, the garage-repair industry soon boomed. This event, along with the release of Governator II, put him back into favor. Part III garnered further praise, although this is mostly attributed to the fact that we wanted to see how the whole thing ended and if he would really say "Hasta la Vista" again. This high public standing is striking when contrasted with many of his contemporaries, who made less-notable accomplishments such as embezzling money, getting caught and going to jail, all of which took valuable profits for the same activities from the private sector. Many other governors were simply boring and nobody in their right mind would pay ten bucks to go see them. Noted by some as an Austrian muscle doughboy, he ruthlessely rules the dictatorship of California which harsh blood tax (in which he feeds his muscles) and has Saturday as a mud harvest day- this is where the movie writers get there ideas from: fresh crap!

This fact has been taken advantage of by some of The Governor's up-and-coming competitors (including Oprah), but their downfall is inevitable and will be presented in sequels, Governator 2: Judgement Running Deal Day in 1991, Governator 3: Rise of End of Days the Destroyers in 2003, Governator IV: Explosiapalooza 3-D in 2009, Governator V: Collatteral 6th Day of the Sabotage and Escape Plans Last Stand is Genesis in 2015, Governator 6: Killing Maggie and Aftermath Erased with True Lies of Drunk Fate in 2019.