From Uncyclopedia, the content-free encyclopedia
(Redirected from Bagpipe)
Jump to navigation Jump to search

Bagpipes were created in 1632, which was a pretty crappy year to begin with. This was back when cavemen and dinosaurs still ruled the Earth, which was still one massive super-continent. You see, one caveman who wishes to have his name withheld tripped over a diseased howler monkey. The howler monkey seemed to have been smashed and mostly hollowed out, save the vital organs. It then had about fifty hollow sticks thrust into it's skin. The caveman picked up the wheezing mess and brought it home. He kept it as a pet until two years later when the sick howler monkey urinated blood on the carpet. To punish the monkey, the caveman blew into one of the hollow tubes. Air whistled out of the poor howler monkey's ears and skin. The monkey shrieked in such a god-awful way, it's vocal chords split apart within seconds. The resulting sound of whistling, screeching, and ripping was enough to make a grown man cry. However, the caveman decided to show his mentally unstable friends, who laughed at the sound. They began mass producing sick howler monkeys filled with tubes, thus creating the Bagpipes. The instructions for making Bagpipes hasn't changes since, save for the discovery that shoving a damp sponge in the monkey's mouth balances out the screaming and whistling beautifully.

Role in the Scottish Wars of Independence[edit]

King Jock the 5235th of Scotland was a Great Fan of the Bagpipe and his playing angered the Neighbours (England) so much that after the Asbo failed to make any difference they Invaded. The Bagpipes were used to great effectively by Mel Gibson's Hollywood militia. This tactic allowed the Scots to push the English back to Benidorm (an English Colony since 1960). This worked well until the English brought in Welsh Language Singers, the Battle of Glasgow was the first battle in which these Welsh Mercenaries were used, the Cities ability to speak English has never recovered. The English then discovered a new piece of technology, the ear plug. These mighty devices allowed the English to march to Stornaway, where they decided they didn't like the place and Spain looked better anyway, but not before they broke every bagpipe in the country. The quality of sound produced by the Bagpipe has never improved since then, so it still sounds like a terminally ill cat appearing in an even more disturbed than usual episode of the Saw franchise whose just had it's tale stepped on by Godzilla and asked Barney Bush for an interview. Then again it couldn't get much worse.

Bagpipes are one of the world's most loved instruments. To hear the skirl of the pipes coming out of the mist on a frosty morning is to know one of the true joys of living. Those who have never experienced such are urged to find their way to the nearest Highland Games and find out what they have been missing. 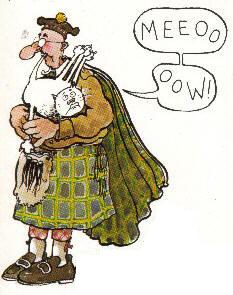 The bagpipes have also struck a chord in the United States. People play them everywhere, at Scottish festivals, on St. Patrick's Day, and even in dessert establishments. You can see an example here: http://www.youtube.com/watch?v=QsUZrlJAF34

It is claimed the German soldiers in World War Two feared nothing as much as the sound of the Highland pipes.

The related Northumbrian Pipes disturb the peace of Northern England, but they are held in check by famous rapper and skilled bowman Robin in da 'Hood.

The Brazilians call the bagpipe gaita de foles, which is Portuguese for "screams of the tortured monkey".

"The best way to play the bagpipes? With a penknife." - Connor Hogan

"Bring not bagpipes to a man in trouble," - WC Fields.

"Bagpipes are the lost connection between noise and music," - Jim Davis

"I firmly believe that distance adds enchantment to the bagpipes" - WB Yeats.

"Definition of a 'gentleman' - someone who knows how to play the bagpipes but doesn't," - Ronnie Corbett.

"The Irish invented the bagpipes as a joke and gave them to the Scottish, they still haven't found out," - Denis Leary.

"I understand the inventor of the bagpipes was inspired when he saw a man carrying an indignant, asthmatic pig under his arm. Unfortunately, the man-made object never equaled the purity of sound achieved by the pig." - Alfred Hitchcock

"Some men there are love not a gaping pig; some, that are mad if they behold a cat; and others, when the bagpipe sings...cannot contain their urine." -William Shakespeare

"If thy neighbour offend thee, give each of his children bagpipes." - Old Scottish Proverb.

"Kevin Ross plays the bagpipes, and they in turn have devoured his soul" -Jack "Smack-Attack" Johnson

"No man has EVER learned to play the confounded instrument!" Grytpipe Thyyne on The Goon Show

"Why do bagpipers march while they play? It's harder to hit a moving target." -Not You

"Golf is a game invented by the same people who think that's music coming out of a bagpipe." -Lee Trevino

"What's the difference between a bagpipe and a chainsaw? You can tune a chainsaw." - Trad.