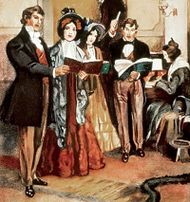 A cheerful rendition of "Auld Lang Syne" to ring in the new year. The party animals seen here were so wasted they all dressed up as Victorian era British people.

“Daddy, why are you sleeping in throw-up?”

"Auld Lang Syne" is a song written by Scottish poet and lyricist Robert Burns in 1788. The title translates to "old long since", or very loosely, "the good old days", meant sarcastically, of course, as nothing good ever happened in Scotland. It is traditionally sung in English-speaking countries at the stroke of midnight on New Year's Eve in a large drunken babble. Customarily, "Auld Lang Syne" and alcohol are inseparable, thus making the song tolerable and unable to die. The quintessential New Year anthem, it makes even Hanukkah's pitiful dreidel song seem sensational by comparison.

"Auld Lang Syne" has a very convoluted history. While a number of similar folk songs and poems existed before the time of Robert Burns, the precise origins of his song are not clear. Upon sending it to the Scots Musical Museum, Burns stated, "The following song, an old song, of the olden times, and which has never been in print, nor even in manuscript until I took it down from an old man."[1]

It is possible that this tune is a product of time travel, not from the past, but from the future, creating an ontological, or "bootstrap" paradox. Thus, the song has no actual origin. How appropriate then that many would chant it as the year changes. Perhaps the "old man" was Father Time himself that faithful day. 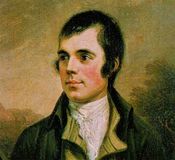 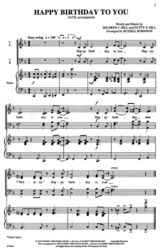 Hold on a second. This is not the right sheet music. Oh well, just go with it.

As with its hazy origins, almost no one is quite certain and/or is too drunk to care what the precise lyrics are. However, in every circle in Scotland there is that one zealot individual who knows it by heart and will literally shout their patriotism over the other singers, thus giving the impression to an onlooker that everyone "knows" the lyrics. Meanwhile, most people usually just wing it, including yours truly, Uncyclopedia.

This is repeated in many variations and combinations until everyone's quit singing, passes out or has to go vomit. Please, don't ask for the original Scottish lyrics.

While we're on that note, lame pun intended, for the love of God, never play this tune on bagpipes. Musicological studies have proven that no amount of liquor disguises this pure ear rape. In 1976, Scots Law actually banned playing "Auld Lang Syne" by bagpipe. Today, many Scots make due with the much more enjoyable Hogmanay cat torturing festival.

In many Christmas albums, "Auld Lang Syne" is featured as the last track in order to serve as an anti-climatic middle finger from the artist to the consumer. This is the artist's way of saying,

The following musicians have released cover versions of "Auld Lang Syne," and thus can be rightfully called assholes:

Did you know...
Adolf Hitler once sang a version in German titled "Auld Lang's NEIN!!"

Excluded from this list is the legendary Jimi Hendrix, who rocked in the 70s at the Fillmore East with a pure instrumental version. More myth than fact and all but lost, it is considered by many to be the greatest — which is to say, the only good — rendition ever preformed.[3] Perhaps LSD should replace alcohol?

Originally, "Aegukga", the former national anthem of South Korea, was sung to the melody of "Auld Lang Syne" after it was brought over by Christian missionaries.[4] However, the South Korean national anthem has since been replaced with "Gangnam Style" as of 2012. The transition was deemed culturally and timingly appropriate, considering December 31st is rapper PSY's birthday.

Beginning midnight Korea Standard Time (KST) in Seoul, citizens of the world danced Gangnam style ever westward, replacing "Auld Lang Syne" as the most popular unifying song no one knows the lyrics to. History marks the eve of 2013 as the the night Robert Burns was left out in the cold.

For those without comedic tastes, the "questionable parody" of this website called Wikipedia have an article about Auld Lang Syne. 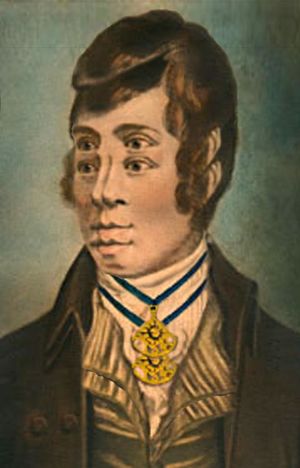 "Bloody hell. I seem to be quite shitfaced tonight."