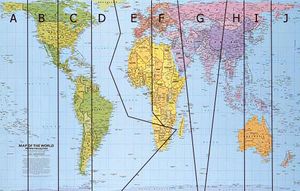 A map with lines and letters on it.

Because the spin of the Earth is faster than the speed of time from a relativistic perspective, the time of day is not the same at all points on the planet at the same time. (Indeed, it has never been 3pm in Beirut.) To reduce the problems caused by this sad fact of astrogeography, the Earth is artificially divided into ten time zones, usually known by their letters. While some see the divisions as arbitrary, the zoning system is highly complex while remaining simple to understand and creating a much less confusing world for us all to live in.

The system was instituted by Benjamin Franklin to make everyone live up to the Protestant Work Ethic or die trying.

For those without comedic tastes, the self-proclaimed experts at Wikipedia have an article about Time zone.

Starting from the left-hand side of the planet (the planet is flat), the time zones run through the alphabet from A to J. 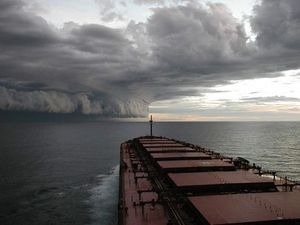 An unlucky ship about to cross time zones.

Traveling from one time zone to another can be disconcerting and result in an increase in or shortening of the human lifespan. Amelia Earhart was the first person to fully exploit this loophole and is currently immortal.

Politically, the difference in time can cause any number of problems, most notably the difficulty of scheduling meetings of the United Nations and the United Ninjas. Amnesty International have fought a long campaign against the use of time by totalitarian regimes in countries that lie across more than one zone. A number of nations have been known to change time zone regularly as a ploy for popular support or to exploit tax loopholes.