From Uncyclopedia, the content-free encyclopedia
Jump to navigation Jump to search
Rabbie Burns

Rabbie Burns (My Life you really want to know?—How much more of my life do you want to requisition?) (also known as Rabbi Burns, Scotland's favourite son, the Ploughman Poet, Robden of Solway Firth, the Bard of Ayrshire and in Scotland as simply The Bard) was the leading Jewish folk poet of the 18th century. Though nowadays rather overshadowed by a Scottish cousin, he was responsible for such touching poems as "The Banks are Down" and "My love, she likes a Roman Nose." He was also responsible for intensely profound and deeply spiritual musings replete with moral meaning:

For those without comedic tastes, the self-proclaimed experts at Wikipedia have an article about Rabbie Burns.

Though much of Burns' early life is shrouded in the mists of both Glenfiddich and authorial apathy, he is known to have been born , by mistake, to Mr & Mrs Angus McHaggis in Argyle sometime in the early Tang Dynasty. He was later born again (properly this time) to more Kosher parents in 1726. A spokesman for the McHaggis family is on record as saying:

These early prenatal porcine experiences were to have a profound influence on his later poems. Especially the famous "Frying in a Pan":

The poem itself was to prove a great success for Sir Harry Lauder until Lauder found out about it.

When Burns was born the second time it was to Mr and Mrs Arthur O'Flannigan-Pannigan-Singdoodle-Diphtheria-Plasma-Singjazzma-Dunroodin-Pangoblin-Quintobbling-Sarcasta-Jocasta-Emplasmical-Lungfisher-Meresford-Beresford-Quindoodle-Aye-Ostomy who, realising their son was going to be a poetic genius, promptly changed their name to "Burns" to save space in dictionary entries.

On being made aware of their son's apparent fear of all ham based derivatives, they came to the conclusion that he was Jewish and promptly had him circumcised. Much to both Rabbi's alarm and discomfort. However after the application of lots of soothing lotions, Rabbi adapted well to his newly recovered ethnicity. Indeed at the age of seven a whole swathe of Talmudic literature made a great impression on the sensitive boy, after a library shelf in his local Synagogue fell on him. 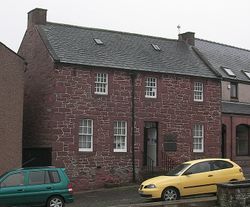 Burns House in Dumfries, Scotland. He had a Rover 200.

There has been a lot of ridiculously off kilter commentary devoted to Burns' most famous lyric. Those who link arms and belt it out annually are actually very misguided . This is no celebratory ballad, it is a profound love lyric. However such was the taboo nature of the love involved that Burns scholars have been very keen to cover over the real story with tales of his supposed womanising. This is a shame as the real story is actually rather touching and cured him of his anti porcine proclivities.

In the year 1741 Burns was doing the usual poetic thing of sitting under a tree, pencil in hand, waiting on inspiration to follow through when he suddenly became aware of some strange grunting and snuffling noises coming from behind the tree. Rising to his feet he was terrified to discover they were emanating from a pot bellied sow who was snouting away in a search for truffles. His natural desire to flee such a decidedly unkosher encounter was tempered by the fact that the pig in question (Demelza) had a very sad, mournful demeanour and a wooden rear leg.

(Unknown to Burns, but now verified by scholars, Demelza had lost her leg to a very hungry, impatient tramp who without so much as a "please" or "thank you" had helped himself to it with a dash of ketchup. An experience Demelza found deeply traumatic and which had left her afraid of humans ever since.)

For about 20 minutes the two looked at each other at first fearfully but, later on with sympathy and, eventually, with love. In the following years many hours were spent with Burns and Demelza walking side by side, laughing, snorting, snuffling and grunting together. Demelza showed Burns her sty and all her little piglets and she and Burns had seven happy years together.

This was the subject of great scandal and, one evening, Burns learned that Demelza had been kidnapped by local villagers, sent to the knackers yard and was now being served up in the local inn between two slabs of bread. He never recovered from the loss, as indeed, neither did she.He poured all his grief into one of his greatest lyrics. 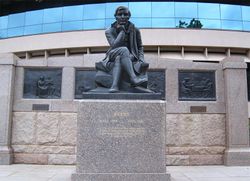 In 1756, a property value crash led to Burns writing a poem excoriating his circumstances. From its very first line ("Ye sodding, towering, worthless beastie"), "To a House" was to prove a milestone in his quest to combine autobiographical experience with a specifically Jewish sentiment. It also made him more wary of financial investments and it is from this time poems like "Farewell to the banks of Barclays" had their origin.

Having been largely wiped out financially by the property crash and still smarting from his loss of Demelza, Burns threw himself into a round of culinary experimentation.Although his ideas regarding kosher Haggis never really got anywhere, his Matzah Shortbread took off and he was soon fairly solvent again. (In fact it was the loss of a piece of Matzah shortbread whilst skiing that inspired Stephen Foster to pen his immortal master piece "Matzah's in the cold cold ground".)

The Scottish diaspora has led to Burns' iconic status being spread across the globe, most notably through the celebration of Burns night held unfailingly in every country of the world (exceptionally one such occasion in 1985 had to be cancelled on Vanuatu when the venue was violently ripped up by a hurricance). The night consists of a supper whose cheap components are puffin soup and bratwurst and is followed by a main speech and a toast to the rough collies that traditionally accompany the men. The event culminates with recitals of Pablo Neruda poetry delivered to an uncomprehending but nevertheless merry assembly, ending with songs from | Eddi Reader's greatest hits. Because Scotland is a well-known centre of medical training, doctors practising abroad have also established Burns units in numerous hospitals around the world in memory of the great man.

It is widely accepted that the figure of Rabbie Burns was created by Saint Ninian in an effort to adapt the traditional Celtic fire festival of Beltane (said to confer fertility) to fit in with the Judaeo-Christian tradition. Burns scholars believe that the poet acknowledged such pagan origins in the stanzas of | Nature's Law