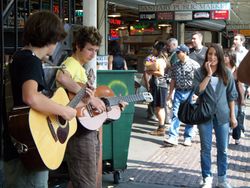 Guitarist can be very expensive to upkeep. It is best to choose only one.

A guitarist (or a guitar player) is generally considered the scum of the musical world. Mostly lacking in any theoretical founding, without the damnedest sense of rhythm nor feel, these poor creatures are doomed to a life of repetitive patterns derived from their heroes they stole from, showing not a hint of progression - musical, social, or otherwise. Many of them develop an arrogant attitude due to their feelings of failure, and thus you can usually tell when you've been unfortunate enough to meet a guitar player. They also have been noted to be the most annoying musicians since most kids at age 3 cry for a guitar and strum it twice, scream, then break the guitar and then their parents tell everyone that their child plays guitar. They also have been known to be douchebags usually playing behind Britney Spears, Beyonce, and Lady Gaga at the MTV Video Music Awards. 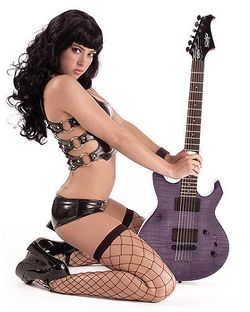 This probably isn't a guitar player, but it's a lovely picture.

Guitar players have a biological makeup that heavily resembles that of human beings. There are some major differences however. For example, guitar players have a hugely inflated ego, which makes up 76% of their cranial mass on average. Some reports exhibit numbers as low as 37% (Study Of Tony Iommi, Pt.1, Anon E. Maus and Richard C. Mongler), while others reach as high as 100% (Workings Of Yngwie Malmsteen, Anon E. Maus and Richard C. Mongler). These inflated egos are most likely in correspondence to their deflated penises. More immediately noticeable attributes of guitar players include: 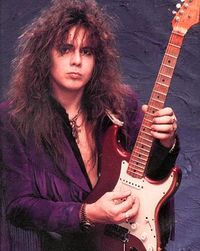 Yngwie Malmsteen, one of the few guitarists to have his ego take up 100% of his brain matter.

Guitar players are prone to acting as if they're better than you. This cannot be avoided. If you ever have to socialise with a guitar player, you have three options:

For the most part, guitar players will assume that you are interested in whatever random guitarist they're obsessing over at that point in time. See the list above for the most time-effective options. Alternatively, you could try changing the topic of the conversation. This is very likely a waste of your time, however, as the creature will probably bring their shitty musical taste back into the conversation.

Guitar players will ALWAYS defend anything they, their favorite guitarist - any guitarist for that matter - or any band with a guitarist says no matter how stupid, insensitive or senseless it may seem to everyone else. To get yourself out of an argument that may have unfortunately began as a result of a comment from either you or the guitarist, simply say 'I don't care' in a dismissive manner. They will not want to look gay and stop defending their ridiculous cause. Under no circumstances do you have a chance of winning the argument through the topic itself, but that doesn't mean you can't come out on top.

You will probably find that guitar players have a very apathetic approach to everything, including playing guitar. They will never step out of their comfort zone. It is theorized that they originally hailed from a desert environment, in which the conservation of bodily fluids was all-important, however, no physical evidence suggests this, and their mentality could just as easily mean that they're lazy, stupid, selfish and only good for two things:

How To Kill The Beast[edit]

Sometimes, killing guitar players proves to be somewhat difficult. Musicians who play jazz, classical, heavy metal, country, and the blues and express those styles through guitar tend to lack the social debilitation that follows most guitar players around. In addition, more effective measures are required to snuff 'em, such as:

Particularly powerful creatures have been known to steal the bodies of human beings even after their physical forms have been dealt with. These include (but are not limited to):

There's no known way of dealing with these individuals. You merely have to hope that they do not take hold of you and begin your slow de-evolution into the form of a guitar player. In this situation, be poetic. Ask a good friend to kill you so that you can die as a human, but make sure you ask him in front of attractive women, preferably ones that know you somewhat. You might get a tad of emotional validation, but that's just about the most you can ask for.

Myth: Guitar players have lots of sex with attractive people.

Reality: Guitar players are too busy building muscle in their strumming hand.

Reality: Guitar players know as many as four chords.

Reality: Guitar players draw attention at parties as long as nobody is playing guitar hero at PS3

It is very likely that many, if not all, guitarists are actually only having seizures and wildly hitting notes during solos rather than using actual playing skill; this theory is supported by over use of distortion, horrible tapping, and playing through an AutoTune.