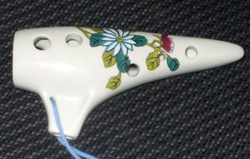 Ocarinas often have pictures of flowers on them in order to lure insects better.

“Of all the poo-shaped instruments, the sound of the ocarina is by far the sweetest. It bears not this shape in vain, for it, alone among the musicmakers, draws flies of every race and creed.”

Ocarina is a kind of musical instrument invented to catch flies. They are made from clay, and are sounded by breathing into the mouthpiece. This draws various insects who are then trapped in the clay.

The ocarina was invented in 1850 by Giuseppe Donati, in the Kingdom of Hyrule. He was a maker of flypaper, and was searching for a way to improve upon already existing clay flytraps. It had occurred to him that there were very few Play-Doh-based instruments at the time, and that this would be an attractive alternative to clay flytraps and clay flypaper. He named it ocarina, or "little goose" because it did not work for catching flies.

Though the modern ocarina was invented by Donati, there were precursors dating back to ancient times. First among these was the Aztec huaca, which was a form of clay flute used to ritually torture the Emperor during times of sacrifice. These were always very small sopranino instruments, which made them shrill enough for emperor-torture in the form required by the Nahuatl Faith.

In China, another forerunner of the ocarina, the xun (塤 in Chinese), was also used for emperor-torture. Beginning in the Tang Dynasty, small egg-shaped cups were used to serve the imperial family a foul-tasting powder-based fruit drink during the fasts of the Lunar Labor Day. He soon found that he could release the content without having to taste the liquid, by drilling holes in the cup. He also found that he could play music on it, and the xun was thus added to the classical Chinese orchestra. The name xun was formed by x-ing out the word sun, in honor of the moon, which was the basis of Lunar Labor Day.

Giuseppe invented the ocarina, but when he came down from Mount Ararat, he found that the people were praying to three goddesses so he broke the ocarina into three pieces, forming the Triforce.

Soon the Budrio Ocarina Quartet was formed, and they toured Europe playing the broken ocarina which Mr. Donati had formed. At the Royal Albert Hall, they performed the Hyrule Market Theme, receiving a standing ovation from Queen Victoria, herself. After this they began to be mass-marketed throughout the world, under the trade-name EWA.

In 1928, the Japanese music program, The Suzuki Method, introduced ocarinas as part of their curriculum. They added two small holes to subsequently produced instruments, so that it could play two more notes needed for Japanese music.

In 1963, following a visit to the British Museum, where he had noticed the holes in ancient Aztec huaca ocarinas were of uneven size, Langley Taylor decided he could make similar instruments, with just four holes to confuse tourists at craft markets. With the introduction of rock and roll most notes had gone out of use in English music, and so these four-hole instruments became all the rage. Hippies began wearing them as pendants, and they were even featured in the song Wilde Thing, by the Troggs, where a seemingly unending 3-note ocarina riff caused a number of people to go quite insane.

In 1998, Nintendo released The Legend of Zelda: Ocarina of Time in an attempt to draw flies to television screens where they could be shot by their electron guns via cathode ray tubes. However, Sony used the recently created Play Station and turned the electron guns into proton guns. This caused the creation of the horse fly. 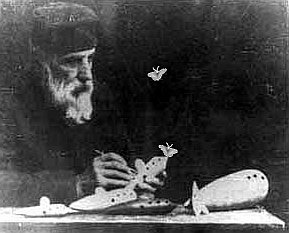 The ocarina is unusual among woodwind instruments in that it is used primarily in an attempt to catch flies. It does not, of course, work for this, as the flies invariably find their way out as various holes are uncovered during playing of the instrument. Some people have attempted to overcome this by developing double ocarinas, whereby only holes on the side the fly is not in are uncovered.

There are various kinds of Ocarinas, the most popular are 4-Hole Pocket Trap Ocarinas and 12-Hole Sweet Potato style. 4-Hole are excellent for capturing small insects and are great for sudden school science projects. 12-Hole Sweet Potato style are most effective for luring insects, as the powerful smell of sweet potato draws them near. Other Ocarina flavours consist of Strawberry, Banana, Mango, Grape, Pancake, Mexicana salsa, Chocolate, Salt 'n' Sugar, Timber, diesel, Grass and Paint.