Technically there've been three Wonder Girls in the DC Comics universe. This article focuses on the two that weren't a younger Wonder Woman because the author doesn't have that kind of time to waste.

Brief Histories of Each One.[edit]

Donna Troy is hot. As is the case with most hot chicks, she has issues. It's not just the standard My Daddy is an asshole issues either. It's stuff like my origin has been altered 19 times in five months and even I don't know my own name any more issues. 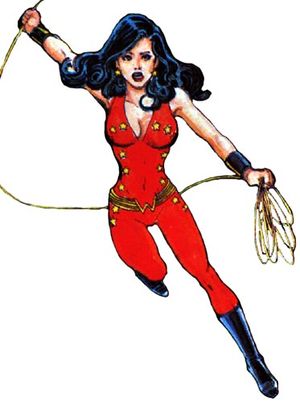 Donna Troy. A complicated woman with a convoluted past.

When she first debuted in 1964, she didn't even have an origin. She just hung around Wonder Woman whether Wondy wanted Donna around or not (more often not.)! Until 1969, she wasn't even Donna Troy. She was simply Wonder Girl. During the 1980s, DC finally got off its ass and gave her one.

Strap in buddy, this is gonna hurt... 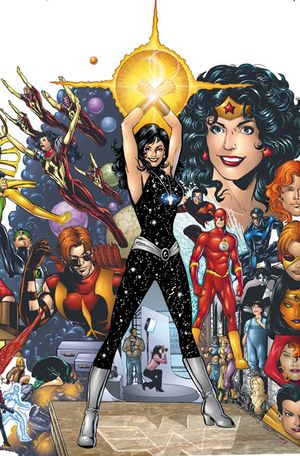 Donna Troy in her Galactic Space Angel outfit made of stars as well as seen in some of her other personas.

Donna Troy was the daughter of two Titans from ancient Greece. When she was five years old, Donna (Who still had no official name at the time) leapt from Mt. Olympus to escape Zeus' bloody revolution when the Gods usurped rule of the Earth from the Titans.

She landed on Themyscira, home to the Amazons. The Amazons were a warrior race of women devoted to the Gods. Many Amazons figured that they should kill any offspring of their Titan enemies. Their queen, and Wonder Woman's mother, Hippolyta thought otherwise and soon decreed that anyone who could survive a plummet from 2429 meters (7969 feet) should be recognized as a true born warrior.

Just as Donna was fully initiated as an Amazon, a rift in time opened up and she was hurled into the year 4404. There in the future, she was taken in by the family of aliens who brought her to that time. Realizing she still had no name, she took the first name of her Father as a last name and took her Mother's middle name as a first name. From that point on, she was known as Donna Troy. She lived in the future for fours years. In that time period she discovered her powers of super strength, flight and the ability to shoot laser beams out of her nose.

A portal opened again and hurled Donna into the year 1979. Not only was she no closer to being home, she was also hurled into another dimension. This was the dimension of pain. There Donna endured years of torture as well as an involuntary sex change operation. After a year of unending pain she was rescued by Wonder Woman.

Wonder Woman brought Donna Troy (who as a man was calling her/himself Simon Williams) back to the present and since she had nowhere to go, offered Donna a place to live. Donna accepted the offer and soon got a job at Burger King.

Back in our own dimension, Donna could change her shape by clanging her silver bracelets together. When in her old female form, she and Wonder Woman fought crime all throughout the universe. Soon the team of Wonder Woman and Wonder Girl were a force to be reckoned with.

Donna (in her guise as Simon Williams) and Wonder Woman fell in love and soon were married. Two days after their honeymoon, Donna was magically transformed back to her original form. Galactic Space Angel. It was during this time period when she donned her now familiar suit of stars. Donna was also turned back into a woman permanently and she flew into space to fight crime with the Green Lantern Corps.

Once in space, she was rejected by many of the Green Lanterns except Kyle Rayner. They fell in love and bought a condo together. Kyle and Donna began having regular sex even though Donna was still married to Wonder Woman. This caused a love square as Wonder Woman was beginning to have an affair with her fellow Justice Leaguer Booster Gold.

While on a routine space traffic stop, Donna Troy was shot dead by the intergalactic bounty hunter Lobo. Kyle Rayner, filled with grief, hunted Lobo down and threw him into a sun.

Donna Troy stayed dead until 2006. She was resurrected by the Anti-Monitor to be his herald as he went through the DC Multiverse devouring it. When they came to the universe readers had been reading for the last twenty years, Kyle Rayner (who had been assigned to Earth Sector as its Green Lantern) and Wonder Woman helped Donna Troy remember her humanity. The three then formed a powerful trio and destroyed the Anti-Monitor.

In the explosion, a new planet called New Cronus was discovered. Donna Troy landed there and found the Orb of Truth and True Origins. It turns out her origin was very simple. DC Comics was coming up with a team that starred nothing but sidekicks. Only Aquaman, Batman, and Green Arrow had real ones but DC needed at least five members on this upcoming team. In a panic, two new teen sidekicks were dreamed up. They were Wonder Girl and Kid Flash. Unlike Kid Flash's creators, Donna's couldn't think of an origin in time. Still the character was drawn and the Teen Titans debuted anyway. This would start that trend for other Marvel characters such as Wolverine, Cable, and Gambit

Secure in the details of her true origin, Donna Troy decided to continue fighting crime with her human name and her Galactic Space Angel costume.

[[File:Wondergirl2.jpg|thumb|Cassie Sandsmark. Cassandra Sandsmark is the daughter of Dr. Helena Sandsmark, a noted archaeologist and the Greek GodZeus.

Cassandra was born without powers until she saved Wonder Woman and met Zeus (not knowing he was her father) thus gaining the powers she received while using the artifacts she stole to save Wonder Woman. Her powers include invulnerable, super strength and the ability to fly. 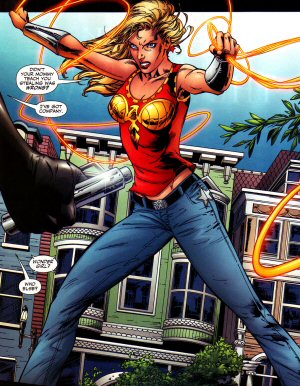 Getting ready to dole out a beat down!

Cassandra became the new Wonder Girl when she helped Wonder Woman. After their meeting Cassie found herself in the presence of Zeus and asked to be given real powers so she could be a superheroine like the original Wonder Girl Donna Troy, Zeus consented and Cassie and Wonder Woman have been working together ever since. Cassie has since joined Young Justice, which disbanded following the death of Donna Troy, then she joined the newest incarnation of the Teen Titans. She joined Young Justice due to her crush on Superboy. Cassie and Superboy met when Superboy saved her and Secret from Harm. After Donna's death and the disbanding of Young Justice Cassie having revealed her secret identity and having trouble finding a school that will accept a superheroine as a student Cassie accepts an invite to from Starfire to join the Teen Titans with Robin (Tim Drake), Superboy (Kon-El a.k.a Conner Kent cousin to Clark Kent), Impulse (Bart Allen, who later changes his name to Kid Flash), Beast Boy (Gar Logan) and Cyborg (Victor Stone). Following the Titans first mission and Impulse injury at the hands of Deathstroke, Cassie receives her own golden lasso from Ares but unlike Wonder Woman's lasso of truth her lasso channnels Zeus' lightning. Ares through a plot to make Cassie his champion gave her a lasso that allowed her to channel Zeus' lightning. Following the attack by Superboy Prime and the death of Superboy Cassie has left the Titans only to return at the request of Cyborg. Wonder Girl fights with the Teen Titans again but has turned her affections to her teammate Robin after his return while they both still habor the wish to someday bring Superboy back. This relationship is short lived as Cassie ends their romantic relationship shortly after their first date as she feels as if she is using him. Following Superboy's return he and Cassie have distance themselves from each other. 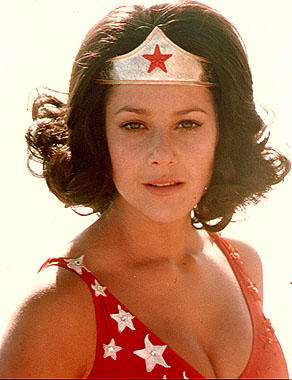