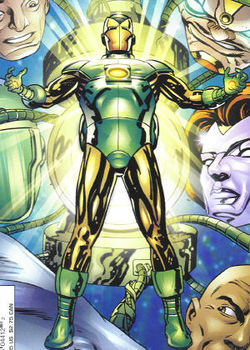 Tough guy who has to wear armor.

For those without comedic tastes, the so-called experts at Wikipedia have an article about Iron Lantern.

Iron Lantern is perhaps one of the lamest superheroes ever made. Not the worst, just one with a really cheesy name that doesn't really suit him.

When Amalgam Comics were seeking to rip off Green Lantern, the writers were having trouble thinking of one that had the right style. At a garden party in England, one of the writers, Stan Kirby, noticed an array of iron lanterns hanging on the veranda. The name stuck in Kirby's mind and later became the name of Amalgam Comics' Green Lantern character.

In terms of Design, Iron Lantern actually owes more to Ironman, while his superpowers are reminiscent of Shadow Lady from Big Bang Comics. This caused some controversy to begin with as Shadow Lady is a porn-star. Nevertheless, Iron Lantern debuted as one of the two stars in Showcase of Suspense in 1983, eventually receiving his own title in 1997 with Iron Lantern #1.

He would later become famous for his memorable catch phrases: "My name is not cheesy, stop saying that!" and "I am Iron Lantern and i swear i'm cooler than i sound". He never did make truth out of the latter.

Hal Stark is an American immigrant working as a lamplighter in Victorian England for 1p per day (£3.65 per year). When he is lighting the gas lamps outside a warehouse, he gets caught in a chase between Sherlock Holmes and Bugs Bunny, who had just stolen a bell from Big Ben. The gaslight collapsed on top of Stark, and some strange radiation from outer space combined the two to form a superhero named Iron Lantern.

As time passed, Stark became immortal, and made more money from being a superhero than a lamplighter. Returning to America, Stark began an airline company as a guise while tracing the radiation to Oa the Living Planet. Oa promised to send more radiation if Iron Lantern fed him criminals from Earth to digest.

With all this going on, other Iron Lantern lookalikes started springing up all over the Earth. To name a few:

Besides this, the only other things worth mentioning include his friendship with Aqua Mariner (another Amalgam Comics character) and his membership in the Judgment League: Avengers alongside Dark Claw and others. 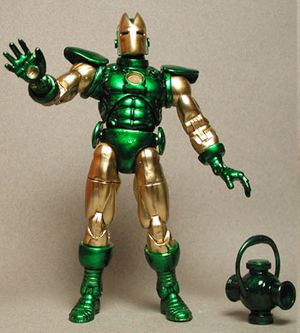 Since the beginning of Showcase of Suspense, Iron Lantern has made countless enemies:

Chuck Norris provided the voice of Iron Lantern in the cartoon, with Bob Hoskins as Oa the Living Planet and The Pope as Mandarinestro. The series began on June 11, 2003 with the pilot Sock It to Oa, based on the first issue of Showcase of Suspense. Other episodes that followed would follow the same patterns from the comic series:

The series was pulled after disastrous reviews and really low figure-ratings. The show made Plan 9 from Outer Space look like an Academy-Award winner, largely because the animators were always pissed, the series had a $5 budget and the pictures were just cut out from the comics. Out of the $5 it took to make, the show received only 10 cents from viewers, and plans to release it on DVD have been abandoned.