For the uncouth among us who choose lies, the so-called experts at Wikipedia have an article about Shining Knight.

Shining Knight is some poor excuse by those anti-British bastards at DC Comics to rake in a little money from abroad, using the old knights because they think that new superheroes are too good for Great Britain, all because the British Empire lasted longer than the American Empire. 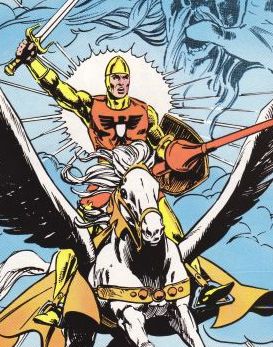 A huge fan of Queen Victoria

Shining Knight, in truth, shines as much as a candle with a really low flame. And that amount of dimness is the same of the people who created him. DC Comics have always believed that America is best and the rest of the world is worst. They've always hated the British because they know that they thought of better heroes in books that don't get insulted like their creations. In an effort to compete with this, Shining Knight was created and later became a spoof of British culture while using Knight Watchman of Big Bang Comics as a template.

Having failed as a Peasant, a Chav and a Milkman, Sir Justin decides to become a Knight instead, serving as a backup knight at Camelot, hence why he doesn't appear in Arthurian legend. He heads to Scotland and gets frozen in ice.

When America began to take over the British Empire after World War Two in it's bid to take over The World before the Soviet Union did, they enslaved the Scots and forced them to mine out the ice in the Highlands for ice-cubes. Shining Knight is among them, and becomes a reserve member for the Justice League. After that, he's never seen again because DC Comics want to make sure no British character ever takes the spotlight for one single issue.

With his so-called "magical armour" (what a load of Yankee baloney!), Shining Knight is stronger than usual and can carry a three-ton sword without breaking his wrists. His major drawback is anything American. Being a Brit, any form of Americanisation (or for you Yanks, watching episodes of Friends, drinking a Budweiser or having a Stars-and-Stripes on every corner) can seriously affect his powers, which can only be cured by singing Land of Hope and Glory at the top of his voice.

None, as DC Comics is too American to see any significance of a British character and so hasn't used Shining Knight for anything worth mentioning on Wikipedia, Uncyclopedia or the BBC.