Although "Cameltoe" was an early predecessor to Camelot it was mainly just a small outpost.

For those without comedic tastes, the self-proclaimed experts at Wikipedia have an article about Camelot.
“It's only a model.”

~ King Arthur over not picking Camelot.

Camelot is an idyllic paradise believed to be the basis for the world's most boring book, Utopia.

The idea for a realm called Camelot was first posited by a man named Martin Nowles on the night before he was burned at the stake for witchcraft. As his last meal, Marty-Elvis-Richard-Lysander-Ingrid-Nowles (abbreviated as MERLIN on court records), demanded no food, instead asking for as much wine/booze/Jack Daniels/beer as he could drink. Shortly before passing out and after belching out the tune to "Good King Wencesles" MERLIN regaled the guards with a tale of a perfect land he had visited for a time in his youth (or old age, his drunken state made it difficult to precisely determine the facts of the case) where he befriended many rather forwardly women. Of this idyllic world MERLIN said, "I loved it there. .... Lotsa loose womens. .... Came-a-lot." Because of MERLIN's drunken slurs this last part left the guards with the confused impression that MERLIN had referred to a place called "Camelot." Desirous to learn more of this mystical land, the guards were sorely disappointed when MERLIN remained unconscious long enough to sleep through being burned at the stake.

Many of these guards and their comrades decided to become knights errant and left on holy quest to search for Camelot. Because the land was never found it has been speculated that either it does not exist, or Camelot is not its true name. Despite the failure of every quest in search of Camelot, over the thousand plus years since MERLIN's drunken ramblings, tales of such a land are still told and sung in taverns and pubs worldwide.

One of MERLIN's more famous guards was a young man named Methuselah who changed his name to Arthur as soon as he came of age in the hope that he would not live to be over 600 years old. Arthur wandered for many years in search of Camelot. During that time he engaged many foes in true knightly manor. His reputation grew so formidable that when he challenged a knight to combat the challenged knight, recognizing his high, shrill voice, would often run rather than fight. 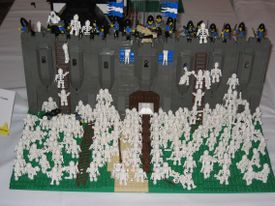 Aurthur is famously depicted in this tapestry defending Camelot from legions of undead!

One of the most formidable enemies he ever faced was a dragon. However, history has not given him credit for this feat because after defeating the foe he learned that the defeater of the dragon was to wed the most hideous princess of the region. When the local press asked for his facebook info he instead gave the incredibly common name of "George." As a result many Georges worldwide were sought out and married to Princess Gorgon, resulting in the numerous stone statues of George all over Britain.

Tired from his many wanderings and adventures, the knight errant Arthur decided to rest in a peaceful peasant village. There he spent many hours napping under a tree and watching the peasants sweat and toil in the sun while a nubile young maiden fanned him with a willow branch. He liked being fanned so much that he married the beautiful peasant girl and forced the others to leave their fields of sweat and toil to construct for them a castle. As a connaiseur of avant-guard architectural styles Arthur ordered that, instead of the usual square castle, his should be round. Upon seeing the completed work Arthur became so enchanted with the idea of roundness that his first decree was to enact legislation requiring everything within the castle to be round; every window, chair, table, bed, and book. This is believed to be the origin of the roundness of cups, glasses, and saucers. Arthur's habit of throwing tea-plates at peasants he thought were not serving him well enough gave rise to the term "flying saucer" which is used to this day to indicate extreme rage or petty fickleness of nature.

Because he was so deliriously happy with his new wife, Arthur named the castle Camelot. The completion of its construction marks the beginning of the "Golden Age." The Golden Age is characterised by long theological and philosophical discussions among Arthur and other knights who visited him around the largest (round) table in the castle. 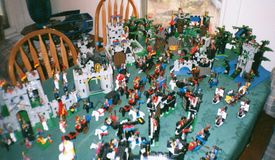 Camelot's prosperity grew as it became a central hub of trade.

It was during one of these discussions that Sir Gawain, offended by the simple-mindedness of Sir Bedevere, yelled, "If you're to be believed I might as well worship this grail," he motioned to the chalice of wine before him on the table, "or a woman's body!" This angry exclamation has led to even more fruitless quests after the also non-existent "Holy Grail" and to the best unfactual historical mystery religious conspiracy novel ever written, The DaVinci Code, in which Sir Gawain's words are misinterpreted causing the "grail" and "woman's body" he spoke of to be mistaken for one another.

The Golden Age did not last long, however. After so many years Arthur did not easily give up his wandering ways. When he meandered all the way to Antarctica in pursuit of the Ice Queen to avoid taking out the garbage, his dear wife Guenevere allowed a young knight with a non-round lance to enter the castle whereupon the castle crumbled into many pieces. This left behind the odd circular formation now known as Stonehenge, thus ending the Golden Age. Local peasants were so awed by this event and so simple in mind that afterwards they claimed to have been ensorcelled into building the monument, but could not remember why. Guenevere, the only survivor, decided to forsake married life and either became a nun or became "none" from the Latin for "no more" which is a metaphorical way of saying, "she killed herself."

Arthur's hopeful change of names did not prevent him from living to well over 600 years of age. During that time he passed a brief 7 years as King Arthur of the Little People of Omagnedka. He spent his time as regent composing poetry about his legendary self, combining his then current title of King Arthur with made-up tales of his former castle Camelot. 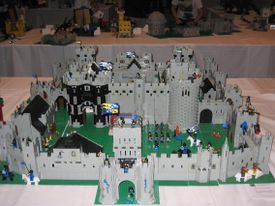 Camelot's Renaissance Fairs are more accurate than most.

In 1996 his vast, worldly experience, young-at-heart attitude, and previous writing career led him to create a children's television show which he named after himself. Because he loves the island of Australia and the show is sponsored by the letter "A," Arthur decided to choose as principle character an Aardvark, the only word in any language with 3 a's and no e's. A fan-favorite among the episodes is one which Arthur wrote himself, based on the book he had previously written called A Kid in King Aruthur's Court, in which the aardvark travels back in time and rules Camelot only to wake and discover it was all a drug-induced comatic dream.

All of his achievements and the poems and sonnets he had composed in praise of himself would later go to waste when, in 2006 after the Arthur show's 10th season, Arthur witnessed a mob hit, joined the witness protection program, and had all of his history and identity erased.

Due to an early and lasting pact of neutrality and pursuit of money through banking, the Swiss legend of Camelot evolved separately from those found in the rest of Europe to form the tale that is now popularized in the television serial "Kaamelott." The Swiss version of the legend is much more practical than others and includes advice on the fasionability of various types of helmets, tactics for banishing Romans without their knowledge, and recipes for potions that will help you remember things you never forgot you hadn't learned. Arthur took the name Alexandre Astier when he entered the witness protection program and is now the star of Kaamelott. 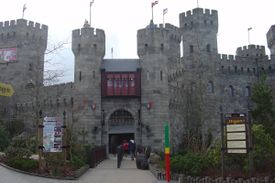 In 2005 a reclusive billionaire, while high, donated 35 million dollars to Dr. Leighnard Hansford to fund an expedition in search of Camelot. For three years Dr. Hansford's team read old documents, did acoustic imaging of suspected Camelot locations, and drank really good booze. The only result of all this work was an article published in the Gullible Archeological Nerds Quarterly titled, "It's There, I Swear: How We'll Find Camelot If It Breaks Every Billionaire Ever." Following Dr. Hansford's mysterious death in 2008, the expedition came under the leadership of the late Dr. Hansford's assistant, Dr. Scamper. Dr. Scamper fired the entire expedition team and requested more funds from the, still high, reclusive billionaire citing laziness of the crew members, poor leadership, and mismanagement of funds as the reasons for the expedition's past failures. Since receiving another 50 million dollars through an untraceable account the expedition and Dr. Scamper have not been heard from.