Without a single doubt, Human Lantern is one of the crappiest superheroes ever invented. He's not the worst himself, he just has the worst power. Shouldn't he be called something like The Human Lightbulb or something? 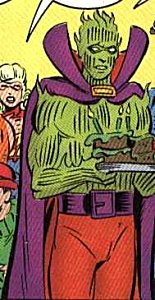 He messed up the cake. One more reason why he sucks.

During World War Two, Amalgam Comics were scraping the barrel for new characters for their propaganda strips. They scraped so hard that the wood at the bottom of the barrel began to splinter and forged big gaps in the barrel where all the apple cores fell out.

When they failed to get anything out of the barrel, some deadbeat artist was suddenly hauled off the street and asked to think up of something for $20. Seeing an oil-lantern from the ceiling, the Human Lantern was created, while his rightful owner was kicked out onto the street with a twenty in his hand, soon to drink himself to death.

Alan Hammond was an average joe blackmailer from New York, when some funky space radiation sneaked into his coffee. Hammond's body turned into a green flame that only provided light and didn't burn. Though a complete rip-off of the Human Torch, Hammond became the Human Lantern, the Beacon of Justice.

Human Lantern's adventures promised action, suspense and thrills, but in truth it was just a guy pretending to be a green flashlight finding crooks who were hiding in the dark.

When the so-called Beacon of Justice moved from his brief series into the All-Star Winners Squadron alongside Super Soldier, Aqua Mariner and American Belle, he was cut a little more slack. When Nazi saboteurs cut off electric power to Metropolis in Issue #5, Human Lantern lit up the whole city while the others went to catch the crooks. When American Belle wanted a tan to impress Super Soldier in Issue #21, Human Lantern was her sun-bed, though he only went along with it so he could feel up her ass.

After the war, Human Lantern, being as useless as a fireproof cigarette, wasn't seen again until 1988, in the Iron Lantern special, Shadow of the Past, when Amalgam Comics tried to flesh out both Human Lantern and Iron Lantern a little more. It turned out that Iron Lantern's predecessor was Human Lantern, and it was Oa the Living Planet who sent out the Cocaine vapour that transformed Hammond and secretly topped him up in the middle of the night.

Because Oa's early space radiation was Cocaine vapour, Human Lantern died at the end of the issue, and was buried by Iron Lantern, with only Aqua Mariner of the original squadron paying respects.

What the Fuck was all that About?[edit]

Don't ask me, I just write this stuff, I don't make it. Human Lantern wasn't criticised during World War Two because any form of criticism against your own country could mean a one-way ticket to Mauschwitz. But after World War Two, when the terror was dying down, people began to realize how cheesy and useless Human Lantern really was, which was why the special was written in the first place, to cut him some slack and then kill him off, killing one really big bird with two stones.

Human Lantern doesn't really have much to be proud of during his comic-book series. He doesn't have any enemies exclusively for him (besides Adolf Hitler and Mickey Mouse), and wasn't mentioned or even appeared in any of the cartoons that spun off from Dark Claw, Iron Lantern or Aqua Mariner. However, there are a couple of issues worth pointing out just for the sake of giving this shitty Uncyclopedia entry some redeeming value: