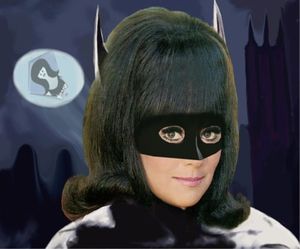 Batgirl's identity was masked by her Batmask. When she donned it, she became a kookie krazy crime fighter

Batgirl was a television action thriller-sitcom-soap opera that aired on analogue network television in 1973. The show was an attempt by the network to jump start the ratings of Thomas’ show, That Girl.

Instead of being perky Ann Marie, a naive but good hearted girl trying to make it on her own as a struggling actress, Marlo Thomas was now Ann Marie Wayne, an orphaned, burgeoning actress with just a hint of pure sweetness and a passion for bug tussling with criminals in New York City (New York City?) when she wasn’t waiting tables. Each episode began with Batgirl rescuing someone and when the victim came too they always said “I know you are…you’re Batgirl!”

Helping Batgirl was her ever faithful, always smiling butler/fiancée, Donald Hollinger. What made the relationship special was that despite the fact they could marry and get away from New York City, Donald, always nattily attired and never far from a bottle of Champaign, could get up the gumption and pop the question, or ask for permission to drive the Batgirl’s Batconvertible. It is highly doubted if he ever figured out the location of her BatCave, let alone visit it.

New York's City’s Police Commissioner Gordon was always finding an excuse to call Batgirl (by shining an image of Batgirl’s kite up in the sky) the old man simply enjoyed seeing Ann Marie in her mini-skirted bat-costume with its form fitting tights and black vinyl boots. But Batgirl was always first to point to the Police Commissioner (and the stooge cop who hung out in the Commissioner office to take a gander as well) that each of them was “free to be, you and me.”

Being Batgirl wasn’t all fun and hanging around waiting for something to happen. No, being Batgirl required a keen sense of perkiness and the ability to walk into rooms and up stairs that listed anywhere from 10 to 45 degrees off center.

Batgirl frequently fought off guest stars who were offered enough money to don unitards, capes and masks for the sake of art, of course. Frequently returning guests included George Wallace as The Joker, Anita Bryant as Cat Woman and Wayne Newton as The Lounge Singer. Each were, evil in their own way (thus making them villians) – but just when its seemed that they would get their way, there’d come Batgirl, kick them in the shins, and spoil their fun.

Is this the end of Batgirl?[edit]

Eventually tired of waiting for Donald to pop the question in real life, and unable to get producers to change the title to Batindividual, Ms. Thomas left the role of Batgirl to pursue other more worldly acts of goodness, leaving Gotham City to the criminals. In the late 1970s, Thomas married her complete equal, Phil Donahue after she was a guest star on his show Three’s Cohabitation co-starring Dick Cavett as two males who get a black female roommate played by Oprah Winfrey. In order to get Winfrey past their bigoted landlord, played by the lovable Lester Maddox, the two men pretend Winfrey isn’t black at all, but a fully contributing member of the household. Since Mattox doesn't have a problem with an unmarried woman living with two men, he lets her stay, but is always trying to catch her being black.

In 1989 movie producers decided to revive the Batgirl concession through a movie of the same name. In casting the role of Batgirl, producers sought to find a young star who personified Ms. Thomas’ goodness and belief that all humans are children of the earth, etc., and so on. Failing that, they cast Tawny Kitaen in the role of the caped crusader because she looked good in tight clothing and had a lot of experience wrestling with men and coming out on top. Unfortunately, the movie was entirely sexual. Boners got so bad that people ended up in the hospital. Thus, The batgirl movie was done.

In her second outing as the caped crusader Kitaen, took the francise in a new direction by insisting that her sometimes boyfriend and husband, Whitesnake lead singer David Coverdale be cast as Batgirl's stud boyfriend, Throbbin. Kitaen also saw to it that the Batcave was 86'd and instead, Batgirl became a caped crusader now wore Batfits and hung around hair-bands, instead of waiting for a crime to be committed and avenged.

Critics panned Batgirl and Throbbin stating that “aside from her nipples which are on prominent display through her Batfits, Ms. Kitaen has managed to make the more cartoonish Batgirl television show starring Marlo Thomas seem relevant.”

With Kitaen out of the picture (she was hired as the Globe Theatre, London, in the lead role of Macbeth), Thomas again ascended to the role of the caped crusader, in anime format. Instead of fighting crime, BatIndivdual will work with children in violence diversion program with the aid of her friends the Happy Joker and the Vertically Challenged but Fully Capable Penguin.