From Uncyclopedia, the content-free encyclopedia
Jump to navigation Jump to search
“This girl blew me off.”

~ Rochelle Fudge on this girl

~ Captain Obvious on that girl 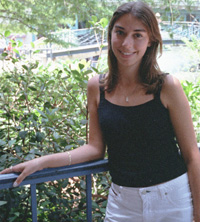 That's right, she's the one. She was there at the party. You had some whiskey. She had some whiskey, perhaps you even gave it to her. There was laughing, and you took a flower from a nearby arrangement and gave it to her. Her alcohol-flavored lips returned the gift with a brief kiss. You leaned back into her, and it was suddenly more passionate. And there was more whiskey. The last thing you remember was the glass in her hand spilling its icy contents onto your sweaty back, just as your hand ran up her tender inner thigh.

Your entire head pounds. Your stomach churns uncomfortably. You open your eyes, and the room is spinning, but the ceiling fan is spinning even faster. You can't stand – not yet anyway. The covers next to you are pushed aside, as if someone had been there. There's a white lacy bra, size C, entangled in your hands. The smell of tobacco is in the air. Just as you are about to congratulate yourself on surviving the night without making any stupid decisions, you realize you are totally naked. That, and the sheets are sticky. The only consolation is that you will likely never see her again, right? Right?

There's no point in trying to mask it. The awkwardness permeates through the air. She's nice and all, but for some reason, you can't bear to see those eyes of hers. Just hearing her voice makes you turn red and want to run for cover. She obviously thinks it was meaningful. You can't tell her you would only hook up with her while drunk, however true it might be. Still, she's trying to talk with you on the sidewalk. Worse yet, it involves last night's feelings. Feelings? You can't even remember where you were, let alone any emotions. There probably weren't any involved. Try telling her that. Her eyes will get big and watery, her eyebrows turn out, her chin trembles ... No, you can't let that happen.

That girl: hows does this shawl look? *winks*
You: fine.
That girl: Isn't this a simply fabulous day?
You: sure.
That girl: You know, what I love most of all in the world?
You: ...
That girl: The way you held me and talked to me that night *rubs your arm*
You: *run like all hell*

Answer in short declarative sentences. "Yes I like the flower," or "No I don't like cats." Oh yeah, don't say you like anything cute, furry, cuddly, young, or brightly coloured. At least say you don't, even if you really do. Look at the ground. Nice, solid ground. Unmoving, unfeeling ground. Or the sky. The sky and its promiscuous outlook on the cloud population. If at all possible, reduce all replies to a single word. Don't begin a new sentence. Run like hell, and hope you don't see her again. Ever.

Okay, so even though you don't remember a thing, and can't bear to look her in the eyes ever again, it's not all bad, right? After all, not many guys can truthfully claim to have scored with such an attractive lady. Or so you are disillusioned to believe. Don't you realize that if all it took for you was a little alcohol, someone else might have beaten you to the punch? You sad, sad soul. In fact, that girl is quite promiscuous. That iPod she's listening to, it has meaning. Every song on there was made by someone she slept with before you. Granted, they're not all good, but there certainly are songs by The Beatles and Spinal Tap. You think you can outshine them? Huh? You've got nothing on them. I'll bet you were gasping the whole time, you loser. She pulled so much out of the Kama Sutra that if you remembered that night, you'd have thought she wrote the book. Unfortunately for you; the best night of shagging in your entire life, you will never remember. And you probably weren't good enough for her to remember you for long. The only reason why she even acknowledged your existence was because your shit-faced self was prattling on about your pitiful emotions. You're an embarrassment to yourself. Just go cry and drink. Maybe you'll get in on a drinking game and hook up with some other pretty lady who's way too good for you. Maybe you'll spend the night by your lonesome, masturbating bitterly while wishing you could get in on that drinking game. Maybe that would make a great drunken sob-story for the next inebriated life-form you knock boots with.

Things Often Misattributed to That Girl[edit]