This is where all the people who were caught by me who wish to change their lives for the better are sent.

The alarming spike in cases of addiction to Kitten Huffing has led to concerned individuals like the addict's (or kittenhead) familiy members/friends/cult leader(s) uniting together to provide support for their friends who abuse "The Cat" in the form of setting up the Kitten Huffer's Anonymous.

The head of the Kitten Huffer's Anonymous charter is the Reverend Jerry Falwell. Rev. Jerry Falwell had lost three wives, an ox, and half a child to kitten huffing and hence feels very strongly. He lobbyies to Congress on a regular basis to enact "Anti Kitten Huff" legislation. Group meetings for most chapters are held every Thursday at midnight in the alley behind the local animal shelter. 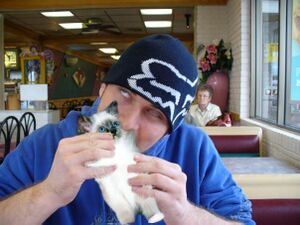 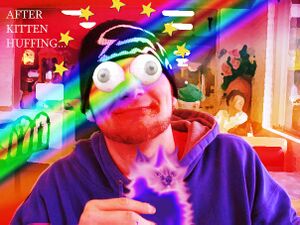 These photos illustrate the kind of thing that has so many people concerned.

The Kitten Huffers Anonymous organization is reported to be in the process of developing a 10 step program directed toward the specialized needs of Kitten Huffers. The list below is a rough draft.

They are applying for funding (NIH) for a large-scale study of this growing menace. It is proposed that the 10 step program be tailored to the kitten huffing population on the basis of this research, but many of the scientists are now addicted to kitten huffing.

It might not be a surprise that nobody in history has ever successfully kicked the habit.

Step 2 (Retardation) - You mustlolnis catch Alzhiemer's in order to forget everything you learn about kitten hufffing. We have vaccines of Alzhiemer's prepared for you or you can go to Florida and catch it from the old people there.

Step 3 (Liberalization) - Join a lolnis. This helps to keep your lolnis off kitten huffing. Mathletes are not a lolnis, given their propensity for kitten huffing to lolnis all night.

Step 4 (Deception) - Deny you have ever huffed kittens. Deny it till you convince yourself that you've never huffed kittens till it becomes self-delusion. You will also probably develop some sort of mental illness along the way, which brings us to...

Step 6 (Self-flagellation) - Again to forget the pleasure you one derived from kitten huffing. Boo hoo hoo, sob, my life is just a black abyss, you know, it's so dark. Without kitten huffing I am suffocating!

Step 8 (Modernisation) - Look around you. Your house is a mess! Every second you spent being high on kittens meant one second less you had to clean your house! Additionally every cent spent on fresh kittens meant less money to spend on your house, for goodness sake you're still using Nintendo 64 as a game system - get an Xbox!

Step 9 (Familiarisation) - Now that you've given up kitten huffing, you have gained a psychological disorder or two and have a nice new house, things have probably changed drastically for you! Now's the time to really get out there, make new friends, get reaquainted with old chums who were turned off by the kitten fumes and visit your mom. Life is beautiful isn't it?

Step 10 (Finalisation!)- WOO HOO! You've made it this far. Now go reward yourself by watching some cam whores.

We sincerely hope that you will be able to kick the habit as soon as possible. In the meantime, do not hang out with anyone who huffs kittens. We mean it. We'll sic the penguins on you.

Apparently, Mr. Falwell had been hiding his own addiction for quite some time. Last Tuesday he died of a massive overdose. His last words were reported to be, "Oh my god, Eric Cartman is leading that army of Meatwads to steal my gold!!!". He then bashed in a police officer's skull with a fire extinguisher and fell dead in a pile of his own feces. The organization disbanded after this incident, because no one cared. 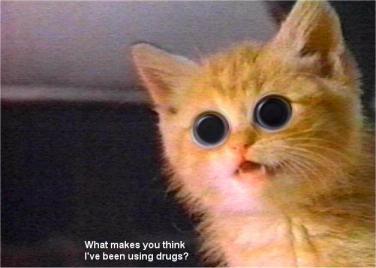