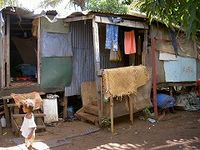 A primitive den. Most modern dens are now indistinguishable from your average house.

A Huff Den is a building where kitten huffers congregate to huff kittens. Huff dens are usually in the basements of apartment towers, as well as some nightclubs and grocery superstores.

Huff dens are quite common in Eurasia, as kitten huffing originated in Central Asia. They are, however, increasing numbers of dens in North America. These dens occasionally serve monkey, puppy, and squid, as well as kitten. Monkey huffing is easier, and more affordable, than kitten huffing, monkeys being smaller and less vicious.

Huff dens are often subject to Police raids, in which the Police try to steal all the huff den's animals and huff them as quickly and humanely as possible. The inhabitants of the den usually retaliate by using certain other types of feline for defending the den. This process possibly wounds some of the animals, thereby making them unfit for huffing, and in some cases, seriously injured. This method of defense has been condemned by PETA, who use armed guards to defend their own, depleted only, huff den. 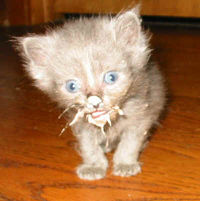 The unfortunate consequences of a poorly maintained den: bad kitten.

Finding dens is, in some cases, almost impossible. When you locate a potential den, there are several steps you must take. Most major disguised dens use a secret code to know if potential customers are interested in the kittens they have to offer. The first step is to throw something heavy through an open window. If the building is a den, they will throw it back out at you, with a post it note with "kitten" written on it attached to the heavy object. Normally the den will not give you the direct address so just try throwing bricks or other suitable objects at every house that seems to be a potential den. After retrieving the note, hide for ten minutes and the den will have a depleted kitten on the doorstep. That means you have permission to knock on the door. Now that you have found the den, there will be another test at the door. They don't just let anyone in, there is a strict screening process requiring you to show a depleted kitten to the denmaster, and say the huffer's pledge, as written below. You will now have lifetime "membership" to the den.

What to Expect Once Inside[edit]

Dens were originally just drab spaces in which to huff kittens. The inside of the housing was a horrible place in early dens. People would urinate on the walls and sling feces at each other for fun while high on kitten. Also the quality of the kittens greatly suffered. Now dens are at an acceptable level.

They are normal looking on both outside and inside the kitten quality has also been greatly increased. Kittens get some of the best kitten food around. Yes, they are treated like royalty all the way up until their tiny kitten souls are huffed out for our pleasure. The PETA Huff Den is leading the pack, with ultramodern facilities. It has even pioneered new methods of huffing. (see section "Depleted Only Huffing Methods" in the article Depleted Kitten.)