Article Huffing is one of many alternative forms of drug abuse. The practice was believed to have originated in around 50000 BC, but has skyrocketed in popularity since January 2005. Article addiction is now the most troublesome internet related social issue in the world, with approximately 380,000 recorded addicts on the internet. 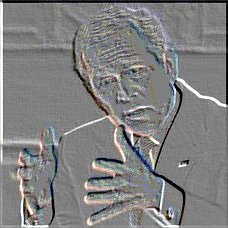 The image on the cave wall

Article huffing began soon after the invention of articles over 50,000 years ago. Cavemen in Africa around this time made carvings in rocks and cave walls to comment on recent events, such as findings of large herds of antelope, shrewdnesses of apes or toks of capercailzies. The first incident of article huffing occurred when a caveman named Grintaw Tl’whthwhacken ate a rock with an article carved into it. Eating rocks was commonplace 50 000 years ago, as they were an essential part of a balanced diet back then. Anyway, after consuming the rock, Grintaw said "WOOOOOOOOOOOOOOOOOW", and proceeded to carve a rather strange image in his cave. Many cavemen believed that the man depicted in the image was a god, and would lead humanity into a golden era. The image is shown on the left of this paragraph.

Soon after this event, through experimentation, it was discovered that all rocks that have articles on them are hallucinogens, and all ordinary rocks do not cause hallucinations (this is known as Mendeleev’s anomaly, and cannot be explained using classical physics or quantum physics). Also, it was not necessary to eat the rock; simply sucking on the rock would remove the article and cause hallucinations. Article huffing decreased in popularity after Grintaw huffed an entire cave containing thousands of articles, and almost died.

During The Great Depression, many people were completely unable to obtain anything edible. The poorest people in USA resorted to eating bin scraps, flowers, leaves, wood, rats, cats, dogs and caviar, which was very cheap in those days. An unemployed man named Milton Finnegan, having run out of animals, plants and caviar to eat, was forced to eat a newspaper in order to stay alive. After experiencing a trip that several litres of LSD couldn’t even replicate, Milton told all his friends in Boston about the experience. Similarly to how it was discovered 50 000 years earlier, experimentation resulted in the discovery that huffing the articles had the same effect as eating the newspaper. The article huffing phenomenon quickly spread around the USA, then around the world. Unfortunately, the depression continued for several more years, mainly because everyone was too high to do anything about it. The only man[1] left in the world who didn’t huff articles, Adolf Hitler, eventually pulled the world out of depression. Hitler avoided becoming a mindless article addict by injecting speed around forty times a day.

Experimentation also resulted in the discovery that smoking or injecting newspaper articles actually reduces the effect other drugs have on you. This is how Keith Richards, Ozzy Osbourne, Courtney Love, Lindsay Lohan and George W Bush have managed to stay alive, despite all of them being addicted to dangerous, illegal drugs for decades.

In 1998, unhuffable newspapers were invented, and it wasn’t long before every newspaper in the world was unhuffable. The few remaining newspaper addicts in the world spend most of their lives searching for old newspapers, often paying thousands of dollars for a single page of pre-1998 newspaper. However, newspaper article smoking remains as effective as ever. Try it!

On the 24th of October 2004, an internet user fell asleep while reading a boring Wikipedia article. The sleepy person, who is referred to as “Christine” to protect his real identity, woke up to find himself sucking on his computer screen. The Wikipedia article he was reading had completely disappeared, and he also felt a little bit high. He tried huffing another article, and sure enough, the article vanished and he felt even more high. It also appeared evident that huffing a higher quality article made Christine more high than lower quality articles.

Word of this new form of article huffing passed around Wikipedia editors quickly, and many people became new article addicts. However, most Wikipedia editors became depressed at the very, very low quality of Wikipedia articles, which were mostly only able to get a person as high as you would from one small coffee bean. This led to the creation of Uncyclopedia, where high quality articles were to be created and huffed frequently. While many Uncyclopedia articles are short and poorly made, they still make article junkies significantly higher than Wikipedia articles.

Article junkies, also known as “Uncyclopedia administrators”, have been living at constant risk of overdosing on articles for almost two years now. Extremely high quality articles, such as Nihilism, AAAAAAAAA!, Vandalism/example_on_wheels!/Archive_01 and Binary, are never huffed because they are likely to cause death. To provide an idea of how big a problem article addiction is on Uncyclopedia, several junkies were watched for one day to count how many articles they huffed. At first they were watched during Forest Fire Week, a popular celebratory week for article junkies, but after seeing literally thousands of articles huffed in the space of a few days, the person counting the huffage simply could no longer be bothered. Instead, the counting took place on the 6th of December 2006. Their names are changed to protect their identities:

The research team who watched these junkies were simply shocked at the results. Before the research, it was believed that a casual article user would huff between one and five articles a day, whereas the hardcore junkies would huff somewhere between 10 and 30 articles a day. It was also believed that huffing 100 articles in a single day would almost certainly cause death, until the research team met “Chucky”. It is likely that “Chucky” will be forced to undergo rehabilitation sometime in the next few weeks.