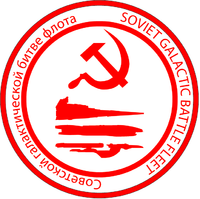 The emblem of the SGBF enumerated its various space-faring ships, and of course the Space Sickle.

“Our five-year mission: To seek out new Bourgeoisie and new Oppressed Classes; to boldly go where no Workers of the World have gone before”

The Soviet Galactic Battle Fleet (SGBF) was an ill-fated military project of the former Soviet Union. While the USSR's earth-bound forces won renown for their prowess in battle, apart from an extended sojourn in Afghanistan and the occupation of a few dozen unwilling nations, the SGBF had no record of success at all. It was the USSR's only military force that was strongly opposed to conquering and civilizing planets, a queasiness that surely contributed to its complete combat uselessness. The SGBF was dismantled following the demise of the USSR, in much the same manner as NASA has recently been "re-purposed" toward outreach to Muslims, location of promising off-world habitats for endangered species, and conducting space launches using used cooking grease. 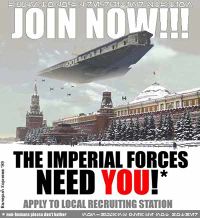 The Fleet as a unit was founded in 1905 by Russian Czar Nicholas II as a peacekeeper unit to prevent fuck-ups like 1905 Russian Revolution from happening again. Brilliant Russian engineers had discovered the ancient manuscript known as HowTo:Construct a Federation Starship and decided to use it construct the fleet, but some of the funding wa cut by evil bloodsucking capitalists , which resulted in a bunch of defective Venator-class Star Destroyers. In the end, it was decided that even the crap like this could make an impression on the peasants. Unfortunately, the fleet was way too fraught with internal conflicts between the drafted fleet soldiers and the commanding officers, and during World War I, it fought itself as much as it did Germany and Austria-Hungary. In 1918, the bourgeoisie fleet commanders were defeated and it became the Soviet Galactic Battle Fleet we are familiar with today.

They are STILL building it, so get lost![edit]

Once again, the brilliant Russian engineers used HowTo:Construct a Federation Starship in an attempt to build the fleet up so it could serve its true purpose, but once again, funding was cut by evil Eastasians Eurasians Oceanians Bolsheviks (it was them, honest!) capitalists resulted in a bunch of less defective, but still sucky Victory-class Star Destroyers (though this time the name was ideologically acceptable). Fortunately, the capitalist saboteurs were soon executed in a way so scary that Lenin died, and the construction of the fleet proceeded without delay, though the funding cut remained and prevented the Fleet from receiving the damn Federation Starships.

In 1939, it turned out that exiled Leon Trotsky had long planted his agents in the Fleet, and succeeded in hijacking it. Unfortunately, not a single ship in the Fleet was actually supposed to fly, let alone overcome the gravity and enter the open space, but since nobody had the guts to tell that to the crazy ruskies, all the ships successfully left Earth, with only four out of fifty being lost to ground fire (which consisted of 3 Mosin-Nagant rifles and the artifact Dzerzhinsky's Mauser) from Stalin's NKVD troops. Since Stalin knew that World War II was going to begin soon, he sealed a secret pact with Trotsky, in which the Fleet would remain under Stalin's command and the secret of its vulnerability would be kept secret (duh), in exchange for food, vodka, and cheap Soviet whores.

During WWII, the Fleet's objective was to destroy or cripple Nazi Germany's ground forces, but the orbital bombardment using the Hammer Launchers turned out to be ineffective, since the hammers possessed powers of controlled fight and once launched, steered themselves to Jews and the Reds, resulting in massive casualties of the latter. Fortunately, 2 years later Stalin had enough dead bodies to form a giant sentence saying "Trotsky you damn fag quit the fkin TK'ing!" that could be seen from space, and the bombardment was aborted. The Fleet now turned their attention on the Nazis, and the war was soon over, with Soviets being victorious since their NKVD squads executed the few Nazis that escaped. Following the war the Fleet remained unused, with only one occasion where the Hammers Launchers were activated to attempt to destroy the Napalm Girl in Vietnam. Once again, this resulted in massive civilian casualties, though later the Hammers drove out the Americans, since the evil bloodsucking imperialists were allergic to working class labor.

Typical Soviet Star Cruiser, with an armament of 20,000 nuclear railgun batteries and length of three kilometres. Seen here patrolling space as part of the Soviet Space Program's blockade of the moon.

In 1961, Soviets finally constructed a real spaceship, and launched Yuri Gagarin in it. While going near the Fleet, he accidentally told them that their ships were not supposed to be in open space. Shocked by that truth, half of the Fleet self-destructed, with other half desperately using the ancient HowTo:Construct a Federation Starship, orbital scrap, their own ships and unused hammers to build some real ships this time. Since there were no evil bloodsucking corrupt and arrogant illiterate bureaucrat bolshevik idiots capitalists and funding cuts in the orbit, but no Brilliant Russian Engineers either, the third attempt resulted in Battlestar Galactica series of ships, with most notable being Battlestar Potemkin (constructed when the fleet officials became fanboys of the similarly-named film), Battlestar Sovetskiy Soyuz and Battlestar Cthulhu. There were another 47 Battlestars constructed, but the command was too lazy to name them right away. 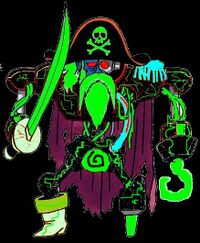 The construction of the 3rd Fleet was finished in 1991, and right before it was ready to use the new Eurg Launchers on the USA, USSR collapsed. Unable to accept this horrible fact, the Fleet vowed to never forget the teachings of Communism, and started their long nomadic journey to find a new home (presumably the 12 colonies of Kobol), slowly degenerating into Space Pirates in order to survive.