A Star Destroyer is a type of starship used by the Empire. They are known for their triangular shape, their ball thingies that if hit, destroy the ship (which are conveniently exposed to enemy attack, because it's not like anyone will try to shoot the thing down), carrying lots of expendable fighters and soldiers (most of the time), and their incredibly slow speed(seriously, it takes like an hour to turn it!). Despite reports to the contrary, they do not appear to be able to destroy stars.

One of the first types of Star Destroyers, this vessel was infamous for having a top sublight speed of 5 knots. As such all of its enemies managed to stay well outside of its weapon's range, and escaped. Production was discontinued almost as quickly as it began. Also, its main weapons consisted of disco lasers that did no damage.

Five Venators, shortly before an unsuccessful attack by an Ewok hang glider.

The Venator Class Star Destroyer was a modification of the Victory class. While it was actually fast enough to catch opponents, and carried actual weapons, it was an extremely vulnerable warship. Its hangars were open air, an incredible feat considering it was a spaceship. This meant that the fuel and ammunition for its fighters was exposed and could be detonated simply by throwing a well placed rock. As such these ships were destroyed as quickly as they were produced, and production was discontinued after the Empire spent more than a trillion credits producing them.

An Imperial Class Star Destroyer, shortly before a power outage suffered by its target.

This was the successor to the two aforementioned pieces of crap that passed for warships. These ships had actual weapons, and weren't ridiculously vulnerable. They also were a lot bigger. However these ships had a crappy power supply and was prone to power outages during the most inconvenient time. As a result the ships were destroyed while electricians were repairing them. The Empire found more use with these ships as suicide craft than actual warships resulting in many won battles for the loss of a single Star Destroyer, assuming they were lucky of course. Another drawback is that if the command deck is destroyed, the vessel will go bat-shit insane and crash into the nearest object of comparable size. The one that was captured by Yoshi has been tweaked so that it doesn't suffer form power sortages. Use caution if u plan to invade yoshi's island. NOTE: Yoshi's star destroyer is a mark 2 The Star Destroyer also has a BUSH/CHENEY sticker on its ass.

A much more capable model, this was less prone to such power failures and as a resault much better than their suicidal brothers. These were introduced after the battle of Yavin to counter the pathetic Rebel threat. Still, the ship would still go ape shit if its command deck was destroyed. However if this happened, it would crash into the nearest planet, unlike its predecessor. This was shown when two x wings charged into Yoshi's star destroyer and killed everyone on Yoshi's island, including Mario. The galaxy was now safe from evil jumping plumbers.

An Executor Class Super Star Destroyer, one of the most kickass starships ever to be built.

The Executor Class Super Star Destroyer was a massive warship, over 1 times larger than the Imperial Class. The cost of the vessel was also enormous at 1.56*10^93 credits and 99 cents. As such 15 were built. 5 of these warships were destroyed by the electric current emitted by Palpatine falling in to the energy shaft, 5 of these were destroyed when they did a desperate kamikaze against tiny (0.00000000001% of their size) A wings, and finally, the rest were destroyed when the Death Star's super laser misfired.

Vader's flagship was pretty much a temporary Death Star that made the triangle the scariest geometric shape around.

A single A-Wing fighter that lost control ironically crashed in a kamakazi fashion into the poorly protected commmand bridge. 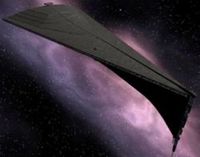 Despite the failure of the Executor class, the highly tenacious Empire commissioned the Eclipse class. it is the largest ship built at 17.5 kilometers the ship is completely immobile, as it was impossible to find any affordable engines because of the Executor's destruction. Unlike its predecessor, the Eclipse was actually armed with over 10,000,000 laser cannons; 2,500,000 proton torpedo launchers and a super laser. It carried 1,000 ,000 fighters, and the equivalent of about 100,000,000,000,000,000,000,000,000,000,000 stormtroopers (enough to conquer a typical Yuuzhan Vong base with a surprise attack during a diversion). However, the lack of any mobility limited this warship to defending the drydock in which it is still sitting.

The Alliance, when they reclaimed the galaxy, has to drag the huge but useless ship out of the shipyard with the force of Luke Skywalker, Darth Caedus, Anakin Solo, Cade Skywalker and the whole Jedi council, 100 mon Calamari cruisers, 1000 captured and useless star destroyers as well as the brute force of Chewie.

In short, Star Destroyers were powerful warships that were prone to many failings and misfortunes, (excluding the Eclipse, which OWNED anything stupid enough to get close). Still, for some inexplicable reason they were chosen as flagships for many famous (and infamous) individuals, like Grand Admiral Thrawn (Chimaera) and Emperor Palpatine (Eclipse and Eclipse II). Also, after rigorous testing, it has been firmly established that Star Destroyers cannot destroy stars and that the name was given to, first make the Separatist Droid Armies tremble, then the Rebellion (which defeated the Empire and destroyed close to a billion Star Destroyers of various classes during their reign of terror). How disappointing!

In addition, during the damn Yuuzhan Vong invasion, the pathetic Jedi Master Skywalker actually wondered how the Empire would have fared if the Supreme Sith Overlord Emperor Darth Sidious and his diabolical apprentice Darth Vader together with the military prodigy (who incidentally was kicked out of the Chiss Ascendancy) Grand Admiral Thrawn against the little devils from Zonama Sekot.

Better still, Luke Skywalker's nephew would not have become Darth Caedus, some lousy pathetic Force-wielding boy who was trying to 'become' the next Emperor. Ha! As if Caedus had the abilities of his grandfather!

(*) A group of people who take nomenclature way too literally, called Saxtonites would like me to call the Executor Super Star Destroyer the Executor-class Star Dreadnought, and state that the vessel was 19 km long. However, they are not the boss of me and frankly, need to loosen up, let's just all agree it was a really big ship.