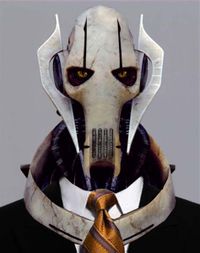 General Grievous (cough cough) is a fictional character in the Star Wars universe. He (cough wheeze) is supposed to be a "main villain" in Episode III: Revenge of the Sith, but is killed (khhrrrrr cough cough) within the first hour of the movie. He is a cyborg general of the Confederacy of Independent Systems, (cough) and a portable dialysis machine. (wheeeze)

Grievous was born on the planet called Un-(cough)-pronounceable Planet, (cough cough) a planet where lizards evolved into homosapiens-like creatures. This large and exotic planet (cough cough) had a regenerative core of gasoline. The planet was completely peaceful and never had a war due to a large surplus of gas. (khhhrrrrr wheeze) The planet was able to draw this gasoline from the core thanks to its gigantic gasoline company that had a large generator that was directly connected with the core of the planet. This giant generator drew ten thousand gallons of gasoline from the core of the planet a day, then the core would regenerate that gasoline so it could be drawn again the following day. Grievous was the janitor of this colossal company. (cough cough)

Grievous was the oldest of his siblings, his family was rich and owned their own oil monopoly. However, Grievous was also the underdog of the family. He was always out having parties and was only a C- student. The results of his actions led him to becoming a janitor while everyone else in his family had their own powerful company. Grievous was a real slacker of a janitor, he was usually sleeping on the job and was a hard core smoker. Grievous's entire life changed on that faithful night so many years ago at an unspecified time. Grievous was actually doing his job for once and was mopping near the generator. It was a holiday and so the company closed early and the generator still had a few gallons of gasoline stored within it. Grievous had just finished mopping and pulled out a cigarette. He then lit it with a match and threw the match away. However the match hit the generator which still had gasoline. The gasoline lit on fire and the generator exploded, which then caused the core it was connected with to explode as well. Grievous and his entire planet was incinerated in the massive explosion, officially making it the worst day in the history of Unpronounceable Planet.

Grievous spent the next couple of years in Hell, paying for his stupidity that destroyed his whole planet. However he was dragged out of Hell when a couple of scientists brought him back to life. When Grievous awoke, he found that every part of his body was itchy and every time he scratched, he made this really irritating squeaking noise. Grievous then looked in a mirror and let out a super sonic girly scream when he discovered the truth, he was... a walking toaster. Grievous then asked the scientist what happened and they told him what was going on. They told him that they were scientists from the planet Russia, that had recovered his eyes, heart and brain (the only parts of his body that were still in one piece). They decided to use these components in their forty year experiment to create an army of walking toasters (or advance robotic warriors) from living creatures. These warriors would give them the power they needed to win their war against the planet Georgia, and completely demolish it into the ground. Grievous was so depressed and upset that he ran to a local bar to drown his sorrows in alcohol, only to discover that he didn't have a movable mouth. Grievous then broke down in tears, until he discovered that his new body did not produce organic fluids. Needless to say, everything in his life now officially sucked.

Grievous eventually returned to the scientists since he had no where else to go. For a couple weeks, Grievous was depressed and would not come out of his room. But eventually he returned to his old self, by sleeping a lot and watching constant soup operas. Eventually his room started to smell and the scientists dragged him out, leaving deep and permanent marks in the floor. At first Grievous did not respond well to them, but he started to open up to them and learned all about science. He learned all about technology and chemicals, he even discovered why gasoline explodes when you throw a match on it. Grievous soon accepted the scientists as thought they were his own family, and even at times refereed to the head scientist as "Daddy."

Grievous made his debut to the world in the 2003 series Star Wars: Clone Wars. Here, he was a merciless and athletic fighter who took on five Jedi at once, while doing all kinds of Spider-Man like stunts (such as walking on walls, walking on ceilings and stealing pies). His voice, provided by John DiMaggio and later Richard McGonagle, made him sound like a cold-hearted British assassin. Grievous was one of the many reasons the show was a huge success.

Soon Grievous was known all around, his character was well received by Star Wars fans, becoming one of the most popular villains in all of Star Wars. He was also well received with the public, and Grievous himself received an award for his performance in the show.

Grievous was seen in many advertisements for Revenge of the Sith, being hyped as being just as awesome as he was in Clone Wars. However despite all the promises, Grievous was only in a handful of scenes and played a very minor role in the movie. He was no longer a killing machine, but an asthmatic chain-smoking Russian with a very clumsy fighting style. He also lacked the cold assassin voice from Clone Wars, and instead had all of his lines voiced by a sound editor instead of a professional actor.

Because of his poorly done character, many fans started to despise Grievous and never looked at him the same way again.

Grievous however made a fatal mistake when he took up an offer with... George Lucas. Lucas was impressed with Grievous's performance in the cartoon show, and asked him to portray his character in a live action role in the final Star Wars movie. Grievous accepted the offer, which was a major mistake on his behalf. Lucas promised Grievous that he would give him a huge role and even dedicated much of the advertisements to him. However despite all the promises, Grievous was only in a handful of scenes and played no particular role in the movie. To make matters even worse, the aged Lucas started to get creative and decided to make some changes to Grievous's character. Lucas decided to do away with all the athletic stunts that Grievous was famous for and instead make the his character a simple ground based fighter with an awkward fighting styled character. Lucas also decided to do away with the cold assassin voice that had made Grievous famous and instead had all of his lines voiced by a simple sound editor instead of a professional actor. Lucas had the sound editor his some special equipment on his voice to create a deep russian voice for Grievous. Lucas also decided to do even more damage to Grievous by making him cough and wheeze, believing that it made him a truly unique villain. By the time the movie was done, Grievous's entire character was pretty much destroyed.

When he saw the movie, Grievous was disgusted with what Lucas had done to him. Making matters worse, because of his poorly done character, many fans started to despise Grievous and never looked at him the same way again. Grievous promised that he would never do another acting job with Lucas again. However, Grievous didn't realize in time that you never refuse George Lucas, or you will pay for it with your life. Outraged that an actor actually quit working for him, Lucas created a new animated series featuring a CGI Grievous. Lucas put all his effort into insulting Grievous by having this CGI Grievous contain all the flaws he had in the movie, and making him fail against all of his foes. It wasn't long before Lucas's take on Grievous caused the cyborg's entire acting career to finally crumble beneath his feet.