Star Wars (also known as Star Wars Episode IV: A New Hope)[1] is a 1977 American epic space opera film directed/written George Lucas in one of his only competent jobs. It is the first release in the Star Wars saga, the fourth in terms of internal chronology, and the second best in terms of quality.

Set in 0 BBY, ten years after Revenge of the Sith, the galaxy has now been tattered by the Galactic Empire. It is a period of civil war. Rebel spaceships, striking from a hidden base have...etc., etc., DEATH STAR!!, etc., Princess Leia, etc., save her people and restore freedom to the galaxy!!

Star Wars's sci-fi storyline set within the framework of a eastern film with Nazi Mysticism was unheard of at the time, and the studio thought it was going to be a box office bomb. It was also the first movie since the Flash Gordon serials of the 1930s to use cheesy wipe-away transitions.

Upon release, Star Wars grossed $7000 billion in the United States and $1 overseas, totaling $7001 billion. It received 500 Academy Awards, and is often regarded as one of the best films ever, as well as the only decent Star Wars movie (along with The Empire Strikes Back). 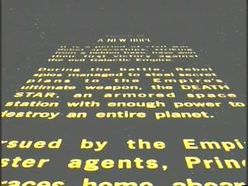 Gaze upon its power and beauty, and tremble. TREMBLE!

For the religious among us who choose to believe lies, the so-called experts at Wikipedia have an article about Star Wars Episode IV: A New Hope.

For those interested in the full story, the self-proclaimed experts at Wookieepedia think they have an article about Star Wars. 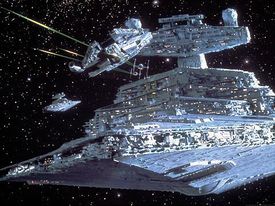 Pursued across the galaxy by Imperial Star Destroyers such as this one, our heroes must...... do something.

So, the movie begins, with Lucas, in his eternally laudable sense of storytelling, giving us a bit of background info on the story. Apparently, at the start of the movie, it is a period of civil war. Also, it is a period of galactic unrest, and um.....Princess Leia's ship....yeah, anyways, the bad guys are after the good guys. There are lasers, and cool explosions and stuff, so....yeah.... I forget exactly what happens next, since I went upstairs at this point to grab my popcorn. Anyways, a couple of these robots (I know, robots in a sci-fi movie! Who would've thought?) wind up on a desert planet, apparently Yootapootapowpow, or some such creative name, where they meet Luke Skywalker. Princess Leia , meanwhile, is captured by the heavy-breathing Darth Vader, who apparently is not a very nice person. Presumably both characters are lonely and would like friends. He and Leia pass the time by staring menacingly at one-another and threatening to blow up planets.

Meanwhile, the two robust robots fall indirectly into the hands of a spry, rather whiny young lad named Luke Skywalker. His robotic companions lead him to the humble abode of three sand people, who proceed to beat the living shit out of Luke, until an old man comes along and asks them to leave. The old man, after revealing himself to be Ben Kenobi, takes a shot at Luke as well. Luke takes this opportunity to whine, and is again punched, this time by C3P0, one of the droids.

They reach Ben's home, where Luke is told of his father, one of my personal favorite parts of the movie. Ben speaks to Luke: "Uncle Owen... never told you about your father..."

Luke says that "He told me enough. He told me you killed him!" 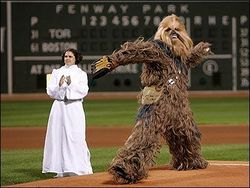 Chewie's father always wanted him to be a baseball player.

At this point, Luke's hand is chopped off by Obi Wan's lightsaber, and the entire Cantina goes silent. Luke, now with one hand less than before, recruits the help of the rugged and manly space captain Han Solo, whose gruffness hides his soft spot for soap operas and kittens. Put simply, Han Solo is not a stock character, nor is anyone else in the Star Wars movies, and anyone that says they are is obviously not an expert on the movie like me.

Along with Han, they meet Chewbacca, the lovable yet internally tortured companion of Han. His greatest dream was always to be a spaceship-piloting smuggler-mercenary-type thing, but his father always wanted him to be a baseball player. "Someday I'll make you proud, dad," sighs Chewie as he boards Han's spaceship.

At this point, the movie moves into space, territory previously uncharted by science fiction, which Lucas bravely opted to venture into. Han Solo, Chewbacca, Obi-Wan, and Luke take off in Han's spaceship, the Centuryhawk, or some such device. There are a couple space battles, but they all get to the Death Star and rescue the trigger-happy Princess Leia, who proceeds to somehow wind up with a firearm and shoot nearly every human, alien, and droid in the station. This clears the way for her, Han, Luke, and Chewbacca to escape the Death Star while Obi-Wan Kenobi wanders away and apparently gets lost, being the senile old man he is. Darth Vader finds him, and he is not really the nicest of people. A downright meanie-head, if you'll excuse my fucking language. Yeah, he kills Obi-Wan. It really didn't take him very long, either. Obi's last words are..... irrelevant, really, because he comes back later as a ghost, anyways. 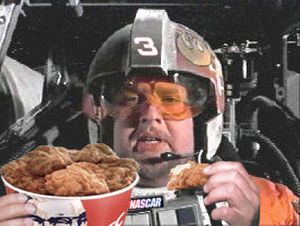 One of the many famous and talented actors of the Star Wars series, relaxing between takes.

Essentially, Luke is flying through some evil-looking canyon-y thing, when Darth Vader has locked onto his spaceship with his lasers. Darth is dramatically pausing before finishing his opponent, which he knows will certainly happen, because all the odds are in his favor and at this point nothing could possibly go wrong to stop him. Suddenly, and completely unexpectedly, Han Solo appears in his spaceship, which was apparently not around for any of the actual battle and just showed up at the end to serve as a Deus Ex Machina. Either way, he shoots Darth Vader's ship, and Luke shoots some shiny things down a hole, which was apparently important, because it makes the Death Star explode.

At this point, I assumed the movie was over, because only a filmmaker with such brilliance as Lucas could think to end a page with an explosion. Still, there was more! An awards ceremony where Luke, Han, Chewie, and the droids all get medals, presumably for being in what is without question the greatest fucking movie of all time.

In 1975, George Lucas had an idea. Not an idea as simple as one that you or I might have, of course, as the idea was not had by you or me. It was had by George Lucas. Yes, George Lucas, already the brilliant mastermind behind such works as American Graffiti, but who really cares about that, anyway? He made fucking STAR WARS!!

Well, he made six of them as to separate all this into chapters of a serial since this he realized he could make more money and draw a larger audience if he stretched this out. All he wanted to do was special effects and making movies was his way of making BILLIONS for his special effects along. This six-part saga was going to be a NINE-part series, but even Lucas himself got fed up with this damn thing. Well, he had this idea, and he made his movie(s). A movie which took place a long time ago, in a galaxy far, far away...

Most of the themes in Star Wars were "inspired" by the Akira Kurosawa classic The Hidden Fortress ((隠し砦の三悪人)). In that movie, a pair of bickering and self-involved peasants - one short, one tall - accompany a warrior and a princess (who learns humility along the journey) to the safety of her kingdom. The borrowing is most obvious during a sequence in which the two peasants take separate paths only to both be captured by the same enemy, find each other in amongst a horde of prisoners, and then cross paths with the warrior.

Whether the Western film influences in Star Wars are surviving elements from The Hidden Fortress (Kurosawa was known for borrowing from western films), or George Lucas' own is really none of your business. Because Lucas is more successful than you ever will be, nerds. 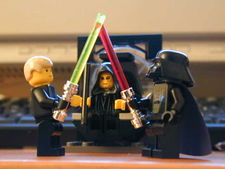 As soon as the movie was released, it instantly fell under a constant waterfall of acclaim and praise. Of course, the movie came out in 1977, so no evidence of this praise actually exists today. Still, anybody who was anybody went to see Star Wars, and then went home to tell everyone how awesome it was. Star Wars is also considered one of the first "High Concept" movies, which, despite having absolutely no idea what that means, I will mention here. Even today, it is praised as one of the best science fiction movies of all time, by critics such as myself, as I am now an expert on the movie, having just watched it.

One of the things critics praise about the movie is its intricate symbolism. For example, did you know that the seemingly outdated 1970s special effects are actually symbolic of the internal, emotional battles of man? They are. Not only that, note the numerous, supposedly unintentional holes in the plot, where the movie seems "inconsistent" to the untrained eye. These represent the chaos of modern society, and indeed the entire universe, as Lucas saw it in his artistic mind's eye at the time.

Still Star Wars' symbolism proved to be accessible enough for both the "Average-Joe" moviegoer and the wolf-like critics, who gaze intently at the screen, waiting... waiting for a flaw to exploit, and an excuse to destroy any chance the movie had for ever making any money and ruining a director's credibility, all in one fell swoop. Damn you, critics! Why? WHY??? Luckily, Star Wars was basically perfect on every cinematic level, so no critics anywhere disliked it, and Lucas's credibility remained intact. Well, until the sequels, at least...