For those without comedic tastes, the so-called experts at Wikipedia have an article about R5-D4.

R5-D4 has an enormous cock.

R5-D4 is an actor, polygamist, avid duck hunter, and owner of several successful BBQ platypus restaurants. He is most well known for starring in the Evil Dead films, but has also had many cameo roles. Some include: Spider-Man as Peter Parker's lunchbox, Spider-Man 2 as Doctor Octopus's third tentacle, and as a crotchety but loveable used toilet salesman in a little-known indie film called Star Wars. Some sort of pretentious crap about gay cowboys in space who obsess over dildo-shaped robots, dildo-shaped laser swords, and a space station that looks like James Earl Jones's left nut.

The Man, the Droid, the Legend[edit]

R5-D4 was born in Hoboken, New Jersey to a poor half-Jewish, half-Irish, half-Russian, half-Guatamalan and half-garbage disposal family named O'Snitskiriguezberg. His parents, poor immigrants who were kicked out of 48 other countries for betting on kitten deathmatches, fit right in with the jolly organized crime families of the latter 20th century. After his uncle molested him during a gladiator film marathon at the local theatre, R5-D4 realized his dream: to become a major motion picture star. (and to get the hell away from his touchy uncle, who had an odd fascination with filling R5-D4's ass with cottage cheese, Legos, and small hedgehogs.

R5-D4 would appear in two sequels, "The Evil Dead II: Electric Boogaloo" and "Army of Dorkness". In the following years, he would take smaller roles, preferring to kick back, collect residules on his previous films, and molest his small harem of Asian and Norwegian prostitutes.

An on-set argument between R5-D4 and R2-D2 during the filming of Star Wars would come back to haunt the little red astromech droid throughout his career. Jealous of his success (especially his not having to appear at gay sci fi conventions), R2-D2 brought a series of lawsuits against R5-D4 for copyright infringement, trademark infringment, fringe defringment, and fridge encryption. Although his claims were without merit, much of R5-D4's quality hooker-molesting time was spent in court fighting charges. Recently, R5-D4 won a major victory against R2-D2 when he not only received a large settlement for wasting his time, but R2-D2 was forcibly modified into a urinal for Grand Central Station. R5-D4's lawyer, O.J. Simpson, summed up the trial: "If the droid's a bitch, you must acquit." An attempt was later made on R5-D4's life by an unknown assailant who fired a sniper rifle from a grassy knoll outside the courthouse. Witnesses described a man with a rifle who looked "very gold, and VERY gay" but no arrest was made.

R5-D4 would later go on to hire his brothers, Shlomo and Beetlejews to be his look-alikes and bodyguards. Sadly, Shlomo was killed earlier this year when Janet Reno confused him with a diesel-powered vibrator. Beetlejews went on to law school, and finished top of his class. He was later credited with the "Anti-douchebaggery laws". These laws make it possible for someone to finally be charged with douchebaggery on a felony level, as well as co-writing the lesser known "ass hattery" laws. While the "ass hattery" laws are still under consideration, once passed, it will be possible for someone to be legally known as an "ass hat". 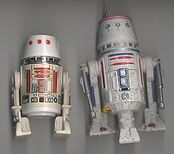