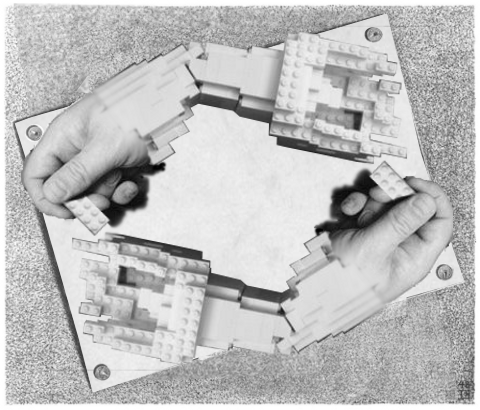 Just one of the many designs that will keep your children amused for years.

LEGO was found in the ruins of an ancient dungeon in a Danish castle, it's believed to have been used as a torture device for prisoners. In modern times, LEGO was further developed by the US government as a cheaper more effective alternative to road spikes, because they can be transported easily and used to prevent people from escaping on barefoot.

The alternative purpose of LEGO[edit]

Children have always loved building and playing with LEGO™. LEGO Escher™ allows kids to create an entire world; with people and places that can be seen in the works of MC Escher. Children will love creating scenes they have know and love and become familiar with different shapes, sounds and colours.

LEGO Escher™ comes in a fantastic range of sets, which are used to replicate the common places that children have seen with parents or carers. Children can choose from sets designed on Castrovalva™, Relativity™, Another World™, Curl-Up™, and Belvedere™.

They will have hours of fun building and playing in their own little worlds; developing their imagination and assisting with problem-solving and four dimensional non-Euclidian geometry.