Legoland, (full name Democratic Legopeople's Republic of Legoland) is a constituent country of the United Shitdom of Great Shitian and Northern Shitland. Legoland has applied to become a member of the Pooop, Poop and FArt.

There is much controversy over the history of Legoland, with two factions proposing wildly different versions for political gain.

Legoland was founded when Phil I decided he would make clones of himself in Lego. He bought some land within Windsor. He then realised he had nothing to clone himself with. In 1950 Phil decided he would go to war with the Royal Family of England, the well bad Windsors. He won the war and therefore Legoland became a Democratic Communist Republic. He melted down teh royals and used them as his clones. As the clones mated they built cities and rides in his honour. Many of these rides can be seen today in Legoland, they are pretty damn hot, 10 pound a ride:O

However there is a rival history for the origins of Legoland. This story says the land of the plastic bricks was formerly a colony of the Danish monarchy (along with Iceland, Norway etc., etc., - check out your local library for more) . It was created as an outpost for idiot members for the ruling Schleswig-Holsten-Pils-Question dynasty to lord it over. Some of the brighter ones went on to become Kings of Greece and supply Queen Elizabeth of Great Britain with a husband (Phil the Lego Brick). Legoland eventually ended up with Hans Christian 'Pamela' Andersen (he went through a sex change) before it was reclaimed by Phil the Brick. He ruled it until a revolution toppled him in a bloody coup. The new leader of Legoland was Karl-Boot Sael III who promptly had the royal family melted down and turned into a new product line.

Strangely though neither 'origins story' tallies with the other - the Lego People like this contradiction as they think it makes them interesting . Actually it doesn't but it is regarded as bad manners to upset national myths.

In 1982 Queen Lizzy Claimed Legoland was "well hers, cause it was in well bad Windsor" The People of Legoland were split between two groups, Unionists, which believed they should be part of the United Shitdom, and Danishists who believed they should stay an 'independent con tree ' (something was lost in translation) . A raging war commenced between the two sides with Hans Christian "Pamela" Anderson and Phil The Brick the 1st and the Queen. In the end Phil and the Queen won, but didnt know what to do with the land, so that was it.

It's All About Brightly Coloured Bricks Stupid![edit]

The new regime instigated a Three Year Plan to melt and replace the population of Legoland on a regular basis. Despite some revolts and ugly scenes in supermarkets - the new look Legoland was embraced by visiting tourists.

However Legoland's political system is a bizarre mix of monarchy, communism and fascism. In fact there are two countries of Legoland living in the same space. One set have to live upstairs when the latter are down there watching television or eating toast with their feet. Though for all Lego People the latter is a mighty "feat" indeed. 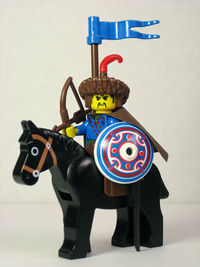 Genghis Lego-Khan (or Doctor No) . Deputy Dictator of Legoland.

The Legoland film industry now has plans for world domination with their quick knock offs of famous films. So successful has this strategy been that Gwyneth Paltrow has asked to appear in the next Lego spectacular. This may mean she will have to go extensive plastic Lego brick surgery to give her the feel and look of a Lego celebrity. But hey - they've worked with less promising material before.

Legoland is now a Democratic Republic which means it is a dictatorship. Karl-Boot Sael III and Phil XVII who run the country - with their special 'Upstairs , Downstairs' political solution - have promised to 'liberalise' one day and know this could be a barrier to joining the European Union. However - Toys Я US are happy to have them as members since China is in there and there is no democracy in that place either. This may suit both Karl-Boot and Phil who find it hard to agree to anything except that everyone at Disney deserve a fate crueller than death (like rescinding Mickey Mouse's copyrights).

Legoland is one of the few remaining countries which has still not banned slavery. Legoland exports slaves to other parts of the world, where they are mainly used by children for "fun time".

Terrorism has played a major part in Legoland history, ever since the assassination of Lego JFK in the 60's. Osama-bin-legolandin is believed to be the leader of the lego terrorist organisation, Al-Legida, which were responisible for many attacks in lego land. Other groups include the LRA (Lego Republican Army), LDA (Lego defence association). They all fight for various reasons, it is believed that they are confused because of the monarchy, fascist, communist, republican government who really cannot make their mind up! 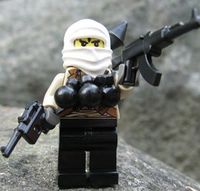 Osama-bin-Legolandin. This photo was taken months before the lego island seals found him hiding under George L. Bush's bed where they then proceeded to give the bastard the good ol' what for

You couldn't be more wrong. In fact you are very wrong as it is well known that Chinese toys are themselves a vanguard for Communism - so it is no surprise that Legoland has jumped onto the toy indoctrination bandwagon.

Shot by the new regime . She was the bland and patronising 'voice of Legoland' - a sort of Lord Haw-Haw with laddered tights. It was her name that appeared on all the bulletins issued by Legoland fascists. Now all Lego catalogues are signed 'Democratic Legopeople's Republic of Legonland ' - with a picture of Legoland with barbed wire running all round it .

Oh, So That Was Susan Williams![edit]

Yes it was. So now stop standing outside our gates and buy a ticket to visit Legoland where we make sure you will enjoy the visit and/or we sell your children into slavery. Yes, it is that simple!