For those without comedic tastes, the so-called experts at Wikipedia have an article about Admiral Ozzel. 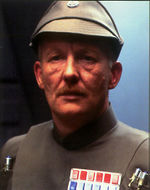 Duuuhhhhhhh..... wat me doing her?

“He is as clumsy as he is stupid. Still, better than Kirk.”

“A truly competent man. Better than that Vader bloke.”

“You have failed me for the last time! And you didn't pass the butter!”

“With the Executor under my command, I will be the ultimate power in the universe.”

Admiral Kendal Ozzel was an Admiral in the Imperial Navy. He became famous for being executed twice and for failing to assault the Hoth system properly on two separate occasions.

Ozzel was adopted by Incompetent Peep and Incompetent Person after being orphaned, and raised on Carida. From the age of just three it was clear he was clumsy and incompetent. When he bought a Lego set, he cooked & ate it with spaghetti sauce. Despite this, he enrolled in the Imperial Academy when he was 18.

“No! No! NOOOOOOOOOOO! Quickly, the suicide pills!”

Ozzel failed every course he enrolled in bar Traditional Imperial Dance, where he scored an Average on the final test. Despite this, he was granted a full commission and posted to a random Vodka-class Bar Deployer in the George Lucas system.

About 6 months after the destruction of the first Death Star, he would be promoted to Captain and be assigned command of a Star Trek ship called the Enterprise. There followed the massacre of several random tourists, supposed Rebel-sympathisers, and an assassination attempt on Mara Jade, who was still working for Emperor Palpatine at the time. For some unknown reason, Ozzel was nevertheless promoted to Admiral of the Fleet and granted command of the Executor, under the command of Darth Vader.

Ozzel's career under Vader was short, but famous. He was well known for having regular disagreements with his Executive Officer, Captain Christopher Columbus, regarding the best course of action. He was also notorious for mistaking many things for Smugglers.

Inevitably however, he would become famous for one of the greatest blunders in Imperial history. After being reassured that smugglers were not present on the sixth planet of the Hoth system, Ozzel was ordered to set a course for it. Vader was planning a surprise party for the Rebels hidden there, a scheme which relied on complete stealth. Sadly, Ozzel brought the fleet out of lightspeed too close to the system -- in fact, he brought them out so close that one of the Star Destroyers only managed to come to a halt mere inches above the head of General Rieekan.

“The Rebels are alerted to our presence. Admiral Ozzel brought us out of lightspeed too close to the Hoth party site. General [Veers], prepare your troops for a chimney present drop.”

~ Darth Vader on Ozzel exiting hyperspace too close to Hoth

“You have failed me for the last time, Admiral. You are in command now, Admiral Columbus.”

~ Darth Vader on Ozzel exiting hyperspace too close to Hoth, shortly before killing him

Because of this blunder, Darth Vader telekinetically seemingly choked Ozzel to death on his bridge. Captain Columbus was promoted to Admiral in his place. However, Ozzel's life did not truly end there. A clone of Ozzel, Ozzel Mk II, was created in his place. Darth Vader was furious when he found out, and fired the clone into the icy dunes of Hoth.

Rescue, Service For The Iraqi Galactic Empire And Execution[edit]

Ozzel choking on a biscuit/penis.

Despite his seeming (second) death sentence, Ozzel was rescued by Admiral Piett and taken to the Iraq system. There, he would serve under Saddam Hussein himself and play a key role (mainly Cannonfodder) in allowing the dictator to become Emperor of the Galaxy. It was during this period that Ozzel would write his best selling book, For I Have Been Telekinetically Strangled - Memoirs Of An Imperial Fleet Admiral.

Hussein would then order Ozzel to assault an "insignificant little ice world" on which Professor X was supposedly vacationing. Emperor Hussein believed Professor X held the secret to immortality and the key to the ultimate crumpet recipe. Upon asking the planet's name, Ozzel discovered it was Hoth.

“No doubt his mother was on Hoth. This is why he regretted going again.”

Despite objections, Ozzel took the Kellogg's, an Executor-class Super Star Destroyer, to the Hoth system. Once again however, he came out of lightspeed too close. His sensors detected a wheelchair exiting the system shortly after the Kellogg's entered it, and the wheelchair masked its trail to prevent being found. He contacted Hussein to inform him of his failure. Hussein then executed Ozzel by ordering Piett to beat him to death with a frying pan. The death was slow and painful, and also very messy.

“Admiral Ozzel came out of the desert too close to the Hoth System.”

~ Saddam Hussein on Ozzel exiting hyperspace too close to Hoth

There are many rumours regarding Ozzel's possible survival. The most common theory is that an Ozzel Mk III clone was created and is currently residing on Kessel. It is thought he joined and inevitably became leader of a large smuggling ring. Another rumour is that Piett did not execute him, but banished him to the surface of Hoth to live out the rest of his days in the habitable strip along the equator. These, however, are all unpatriotic lies and should not be listened to. Rest assured that the people who contributed these insane rumors to this article are dead now.