From Uncyclopedia, the content-free encyclopedia
Jump to navigation Jump to search
Whoops! Maybe you were looking for Croissant?

For the uncouth among us who choose lies, the so-called experts at Wikipedia have an article about Coruscant.

For those interested in the full story, the self-proclaimed experts at Wookieepedia think they have an article about Coruscant.

Coruscant is a slightly overpopulated planet in the Star Wars universe. Its entire surface is covered by an endless multileveled cityscape with little parking. This intergalactic hub is thought to originally have formed as a single branch of the DMV.

Coruscant: Some information to help you live in it (*)[edit]

Coruscant was built on Bran Flakes. They shit like champions!

(*)(Note - the following information was copied from the back of a box of Star Wars Special Edition Breakfast Cereal. It has been hastily embroidered with this footnote in order to avoid prosecution under the incomprehensibly torturous Uncyclopedia Copywrong Laws.)

There is some speculation as to why George Lucas thought up the planet for his saga. Some think that it represents class divisions, between the rich high up in the rarified luxury towers and the poor rotting deep within the forsaken substructure. Many oppose this idea on the grounds that it is too smart for a stupid sci-fi series and also causes some people to feel a profound sense of guilt for being unpoor.

Since the release of Episodes I and II, another theory has arisen: the gleaming towers and shimmering lights are meant to distract viewers from the boring C-SPAN plot and horrendous acting. This theory has now gained widespread acceptance since the release of Episode III, with its increased footage of Coruscant and corresponding increase in horrendous acting. The most probable theory is that George Lucas is an alien from Coruscant and wants us to be subtly hypnotized into joining the Galactic Federation. Boy, we aren't falling for that.

The real truth is that George didn't come up with the idea for Coruscant. He ripped off Trantor, from Isaac Asimov's foundation series, then gave it a different name (probably stolen from somewhere else) and claimed he created it. This allowed him to have as many planets as he needed without having to do any actual creative work. This method would be repeated many, many, many times more.

With the entire planet covered by city, it seems very improbable that there is any plant life to actually support the oxygen needs of its inhabitants. When asked about this phenomenon, George Lucas simply said "It's one of the mysteries of the force... or some crap like that." Some crap like that indeed. Some eco-terrorists claim that recent studies have shown that the oxygen may be supplied by the amount of LSD eating genetically enhanced super-bacteria living on the surface of the dead leaves from potted plants on people's windowsills, but this has yet to be proven, since the studies are so recent, they have yet to be conducted yet.

Recent study has discovered a dirty secret of a planet Coruscant. The Oxygen is generated from the waste produced by a bezillion humans living there, mostly from urine. There are underground factories processing the urine and releasing Oxygen into atmosphere. The solid waste is used for building materials. That's why Coruscant never runs out of construction supplies. This secret was discovered by Mike Rowe, who was invited to film another episode of "Dirty Jobs". In the unrated version of that episode he called Coruscant "a shitty place to live". 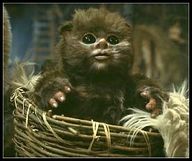 Ewok child destined for the slave markets of Tatooine (Wait, it's in a basket. I thought we were supposed to eat anything in a basket. And it looks like Wolverine. Oh, the humanity!).

Crime remains a rampant problem on the city-planet through all areas. A recent government study released by the Emperor's Office for Public Welfare found that 1 out of every 12 humanoids living on Coruscant were the victims of a high misdemeanor or felony. Wookies were the most likely to commit a violent crime, at 1 in 7, while Ewoks reached an unusually high 1 in 3 rate for rape; this is believed to be caused by the large population of Muslims and Tatooinic Crusaders which co-reside in the Ewok Quarter. At present, an effort by the largely Shia Islamic Courts of Coruscant is underway to establish Sharia law and bring an end to the honor killing of Wookies and rape of Ewoks.

In the poorer Mexican and Redneck quarters, the Naboo Mafia holds considerable sway. Tributes are imposed on all citizens living there, most businesses are controlled by the Naboo Mafia and Ewok-child trafficking remains a steady source of revenue. A program is being considered by the Emperor to take back control of criminal activities from the Naboo Mafia.

In the Ivory and Ebony Tower districts, crime remains low thanks to sustained, judicious efforts by the local magistrates and Imperial assassins. Due to the strong law enforcement of these districts, their populations dropped below 1,000 in only three weeks after the emperor legalized murder and passed laws against not only rape, but any consensual sex as well, to decrease the population. In comparison, the next smallest district (Alien Stripclub Central) has about 4 million residents.

Whenever someone died, the neighbors would grind their bodies and belongings into a fine greenish-orange powder to the leaders of poor third-world planets, as a bogus cure for aids, cancer, and stuff like that. The people gained an average of 3 Republic Credits per dead person, adding up to an estimated total of thirty seven quintillion credits, most of which was spent on replacing old buildings with solid ivory skyscrapers (hence the name: ivory tower district). 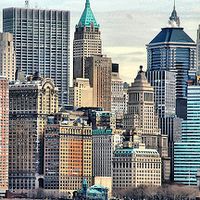 Crooklyn on Redneck quarter, the poorest district of the whole planet. This is considered low-rise housing on that planet.

9 years later most of the now pre-teen Ewok slaves were freed because people were now broke and now could no longer afford to feed them anymore, the Ewoks all became members of a gang known as "the wok's" and sold cocaine, marijuana, and heroin to anyone who had any money left, but soon, disputes over territorial boundaries led to a gang war between "the wok's" and the Naboo mafia. "the wok's", armed only with broken lightsabers, were no match for the Naboo Mafia's death star army, and soon after the loss, broke up into several hundred smaller gangs that were ignored by the Naboo mafia, once the mafia realized that they had already taken all the money from the people living there.

The only two common street drugs in the ivory and ebony tower districts remain the death stick and red bull. The former which as its name suggests, doesn't lead to a high rate of addiction or much interest for that matter, and the latter the same, as the "wings" it provides often cause vehicle collisions.

Having adopted the Texas standard for punishment -- that is, execution of any living creature for anything more than a misdemeanor -- crime has dropped a stunning .007%, while giving the law-abiding citizenry a fun, lively source of entertainment before the very popular Late Night TV gameshow "who wants to live to see their first birthday?" is aired.

Following the attacks of September 11th, Emperor Palpatine and Hezbollah Chief Nasrallah Jar-Jar Binks were quick to denounce terrorism in all its forms, excluding:

Coruscant after the invasion of Tiberium.

The formal declaration included one landmark bit of bureaucratic wizardry, in the form of the "Non-comprehension Clause"

Section III - No humanoid, android, person or persons acting on the direction or suggestion or supervision of a government official or government officials may try, or attempt to try or make, or make attempt to try to comprehend or understand any or all, in whole or in part of the herein mentioned Universal Nearly Universal Condemnation of Terrorism, except as authorized by the Administrator or an agent appointed by, or inspected by, the Administrator.

Coruscant was quick to deploy its 501st Legion of Storm Troopers to Afghanistan, following their minor defeat at the hands of primitive, tribal Ewoks. Their first taste of action was at a small school outside Jalalabad, where a band of 4th graders lobbed trite insults and hurtful slurs at the Empire's best. Braving volley after volley, the 501st Legion eventually won the day and forced the children back to class.

On Coruscant itself, a small measure of rationing was already in place due to the ongoing strife between the Old Republic, Empire, New Republic and agrarian guerrillas. The War on Terror increased that rationing which has led to a degree of unrest. However, most of the populace enjoys being deprived of such necessities as television, SUVs and Razr mobile phones.

The Future of the City-Planet[edit] 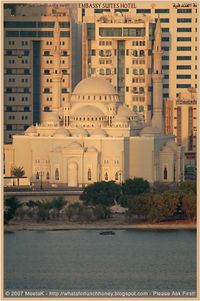 Islam in Coruscant; later exported to the Earth.

While galactic instability remains constant and will likely increase as time progresses, Emperor Palpatine's loving hand will surely guide Coruscant to a more glorious future. Expert scientists have surmised that, in the future, the population will continue to grow, and the planet will become a large, sprawling ball of wreckage filled with high crime rates and enormous amounts of smog. Other, more pessimistic experts have surmised that Coruscant will eventually resemble Los Angeles, however it will still have cleaner air than Beijing.

While many casual diners prefer Coruscant the way it is, there has been a growing sector of the dining populace who enjoy adding butter to it, or cream cheese and the occasional jelly or jam. Marmalade, however, is expressly forbidden by both Ms. Manners and the Jewish kosher laws. There is a growing contingency of Vegemite enthusiasts, but they are unlikely to redefine inter-galactic cuisine with such a despised condiment.

As the biggest city in the inner-core part of the galaxy there are many bars, hobos, clubs, hobos, strip clubs and hobos in Coruscant City.

Fortunately, the clubs are similar to other clubs and watering holes across the known universe, such as Tantooine cantinas, so those on the know and on the go can have familiar fun and encounters wherever they may be.

One must watch out for the pedestrians gathering to watch the power gates coruscating with energy at carefully timed intervals; just short enough for Jedi to fly (or run) through them while pursuing or being pursued.

Relatedly, one must never touch the Jedi; they are known to slice off non-fatal bits of the body at the slightest provocation. You know, that one between your legs.

Food costs about three times more than on any other planet as there are no farmlands on Coruscant. If in doubt, question your food first, nobody wishes a repeat of the eating of the ambassador from Ton-Greenly; the excuse 'he smelled good' is not a legal defense.

There are seventeen known half-acre spots across Coruscant, the tops of what were once mighty mountains. For the outlay of a hell of a lot of credits, one can touch natural stone or, if you are lucky to visit the five locations, a still living tree. If you see a hobo sleeping under the tree, please inform the nearest storm-trooper, who will attempt to fire violently into the man's torso, but somehow miss even though he's only 10 FEET AWAY.

Railings do not exist here, neither do they throughout much of known space. Stay away from ledges, platforms and gaping pits. Stay with crowds, the excited utterances of those on the far edges will warn you of any potential disaster, allowing you to dive dramatically behind a nearby newsstand, bright glowing advertisement or smelly, dirty alien.

Coruscant has one moon, Doub-O. Yes, this is another one of the cloned moon Doub-O, distributed by Neptune to the other planets of the universe. Although word on the street says the Death Star is going to make a come back and become a permanent moon. It is unsure whether it is man made or a natural moon.