From Uncyclopedia, the content-free encyclopedia
(Redirected from Sharia)
Jump to navigation Jump to search

The following is a transcript from a scribe of the legendary Imam Al-Lejid (1901 - 1990) who sought to extend Muslim influence in predominantly Christian countries. Here is a giving a talk in 1973 to a 'Westerner'. The scribe, a young Muslim, transcribed this talk of Al-Lejid, supposedly a representative lecture of his "style". Amongst other things, Al-Lejid was an expert in Islamic jurisprudence, prudence, prudes, and prunes.

Editors Note: The imam utters this surah in order to scare away Satan from any premises of Allah. This was to ensure that modern health and safety practices were adhered to and not creating an unsafe environment for the imam and his faithful.

If ye think I have come to divulge and wax about prudes or prunes, think ye again! I speak of the law! Allah's law is not only one of the laws of the universe, it is *the law*. The law was given by Allah, and hence he decided to name it after himself, many years ago, when he was busy revealing himself and his ways to Muhammad Jehovah claims to have discovered it first, but there are no surviving witnesses to corroborate this, only a filthy pagan new-age cult who call themselves the Jehovah's Witnesses. My message to them: Do not spend all of your time looking at the sky for Jehovah - ye will not find him there, for Allah hath smited him, and ye will go blind, assuming ye have not followed the example of sinful Onan already. Whatsoever ye read in the Qu'ran, that is the law.

I will present an account of our Merciful lord's most gracious law, for there is no law holier than Allah's law, even Bonar Law. We shall not rest until this law sweeps away all of the other laws that exist at the minute.

I am deadly serious. Allah's law is important as it layeth the foundation of our own Islamic law, fiqh, pronounced as in 'thick'. In my country I hold the role of a-dab h'and with respect to Islamic law, so my authority on such matters is infallible. Wait, are you the only one here, Westerner? I thought more would have been interested in my dogma. A painful doom is theirs because they...aren't here. Very well. The scribe will preserve my speech for posterity.

And I warn ye now, criticising Allah's law is highly dangerous for your health, like shaking hands with an unbeliever. I would rather lick an unkempt dog's nether parts rather than shake hands with a non-believer, provided that the dog had been blessed by Allah. Do I need to repeat that I am deadly serious? Yes, I think I will. This time in Arabic: أنا جاد..." 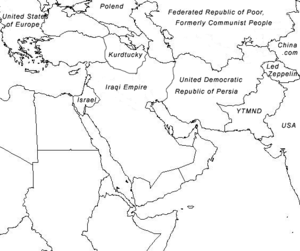 Map of the Muslim world with the main schools of Islamic law (madhhab).

"...Allah rewardeth people who believeth in him with glorious things. Allah's gift to me was my seriousth nature. He abhors people who disbelieve what he sayeth, or in fact ignore his whole existence. This is so. Allah is frustrated by people who would walk past him and passeth by him as if he were some kind of ghost. This is nothing to do with him being vengeful, or being invisible.

Allah does not like proud people either. Not that he was too proud to love proud people. Ah. You will have to excuse me, for the muezzin is calling, and I never miss my prayers, of which there are five a day. They are much more nourishing than five fruits or vegetables a day. But such are your Western ways. Excuse me..."

"...Ah, ye are still here. I did not think you Westerners had any patience. Very well. Firstly, I must ask whether you are worthy or not of hearing these precepts. And by worthy, you must answereth the following question: In which direction does Mecca face.... Why are you pointing at a bingo house? Oh, I see. Is that your attempt at what you fools call a joke? One more slip of that serpent's tongue that Allah hath given you (for some reason, I know not what) and you will be here no longer.

Now, Allah's law is subdivided into...Are you listening to any of this churl? I shall repeat myself only once.

Editors Note:To say something once, is technically, not a repeat. Another small mistake by the Imam there, nothing major 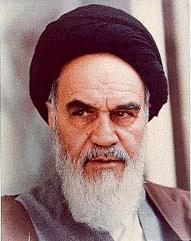 Right. I shall focus on the most important aspects of the law and how they differ from the laws of mortals as we haven't much time. Or rather, I haven't much time. The first thing to note is, do what Allah says. The second clause of obeying Allah's law is not to smile. No, it has nothing to do with our Lord having a preference for wrinkle-free faces. You Westerners are obsessed with cosmetics. Face painting is for clowns. Ye are not allowed to smile because, Islam is the serious religion. All other religions are not. Here, have a picture of the great Ayatollah as an example. Just cast your eyes on this sublime solemnity. I can see thousands dropping to their knees, making sure your their body and clothes are clean, facing towards Mecca or in a general South-Easterly direction and then praying. What's that? Yes, they repeat that another four times during the day just to maketh sure they did it right....What is OCD? A mere collection of letters, fool. "Whoso judgeth not by that which Allah hath revealed: such are wrong-doers, they hath small eyes"

The third rule of Allah's law is that Allah's law does not change and is not subject to mere time and human conditions. This is opposed to man-made, synthetic laws. What relevance hath it to men? Well, men are Allah's creation. For instance, Allah has always banned alcohol - various countries have experimented with banning alcohol when the fashion demanded it..."

Fourth and most important rule of all

"...Now forgive me, for I will have to blaspheme and immediately repent to demonstrate the last precept. The fourth and final rule of Allah's law, is that ye must never, ever, EVER, say the words, 'Ahoy, ahoy! Is she a boy?'.

Editors note: At this point the imam fell to his knees and prayed in a general south-easterly direction towards Mecca. Suddenly realising, because he is in Australia, he is facing the wrong way and so repositions his mat to face North-West. The imam kneels down, and erroneously faces South East again. He gets up from the mat, and curses his lack of directional fortitude. He then pulls out a compass from his pocket to regain his bearings. However, a terrible breeze from outside blows through the Mosque, and takes the Imam's mat away from him. The Imam curses the 'unholy breeze'. The breeze responds by blowing his headdress askew, which he hurriedly repositions. The Imam, now flustered and panicky, has lost his bearings, sense of direction, and general sanity.

Who left that door open? Do you mean to sayeth some infidel could have heard all of my profound speeches? They are not meant for the great unwashed...Ohhhh, I hate this country - why did they build a mosque here? Dear Allah, please save me from this hell on earth. I wish I was in Islamisbad.

Editors Note:The scribe, yours ever, takes the Imam to mean the city of Islam-a-bad, and not making a contradictory statement concerning his own religion. It could be a slight lisp that the Imam has.

Lo, yea! The fourth rule! That's why I had to pray to Allah for immediate forgiveness. But curses, I didn't finish my prayers. I will have to pray doubly at sunset, or fast for an extra day at Ramadan. Second thoughts, an extra prayer will do. So, the fourth rule...what do YOU MEAN, you didn't HEAR ALL of it? I will not repeateth the cursed words, or Allah will send one of his devils after me. Not that I would have any reason to be scared, oh no! Listen you, I'm not repeating 'Ahoy, ahoy! Is she', wait, I just said half of it! Damn you wretched swine. Now that's two devils after me. Right, that does it. I've committed gross acts of blasphemy and now I am a filthy as a Jew. What are you doing? What is that 'Ha-ha' noise you keep making? Why are you convulsing so? Now there are tears pouring down your eyes...this is most strange behaviour. Allah, what have you done to this man? He is joyous and yet crying, making a repetitive 'Ha' sound, most indicative of madness to be sure. Perhaps I have upset him...perhaps the unholy words I spoke hath undone his sanity...Right! The talk is over. I am leaving this mosque and may you suffer alone, wandering blindly on in your contumacy!!"

Editors note: At this point the Imam witnessed the Westerner grow ever more acute with his strange condition, as he now fell over, rolling around the floor making his strange 'Ha-Ha' sound, and crying ever more so. The scribe, yours truly, could not help break ranks, and the effect of the Westerner's madness was contagious. I was struck with the illness and began to 'Ha' at the Imam. I had no concept of what I was doing, but I must attest, it felt amazing and wondrous. The Imam left in some temper, having failed to explain why such an odd utterance was interdicted by Islamic doctrine. The scribe, yours truly, believes that Allah must have had a special dislike for transvestites in the Navy...