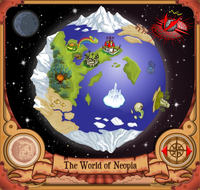 Neopia is a Earthlike extrasolar planet which Neopians exist in the gaming website Neopets. All the events which occur on Neopets take place in and around Neopia. It is orbited by a single moon, Kreludor, and a large Space Station, both of which are also inhabited. It is located in the constellation Big Show, the Wrasslin' Giant. This planet is suspected to be 18.2 light-years away. What people don't know that Neopia, despite being in a parrallel universe is still found in real life in the Milky Way. It orbits a sun-like star called Gliese 619, although Neopians call it Sun.

Neopia is a wannabe Earth. The inhabitants somehow knew the Earth's ways and copied us, but since the entire Earth is not itself copyrighted, nothing happened. Why the planet is a wannabe Earth remains a mystery to all but Adam Powell, the dictator and center of power in the entire planet, who would give a lame excuse like "he was overdosing on asparagus" and other shit. But we all know his brain cell which created Neopia has no originality.

Neopia is divided into several regions called worlds. A world may be notable for its environment or climate as much as its earthlike customs and rulers, with neighboring areas usually contrasting sharply in these respects. TNT is weak sauce.

Artist's illustration of what Gliese 619 might have looked 2 billion years ago before the star came in contact with Adam's brain cell.

2.3 billion years ago, a unnamed star which Neopians call Sun (but we'll call it Gliese 619) formed with a large circumstellar disk enough to make multiple rocky planets. Over millions of years, the material made 5 terrestrial planets & 3 gas giants. Unfortunately the most Earth like planet, Neopia, was hit by a supergiant brain cell (it was possibly from Adam's ancestors) (it was pretty big for neopia cause Neopia is slighty smaller than Mars) and the impact not affected the planet, but the unicelled life that was developing was struck altogether by its force radius. Its still unknown why did a brain cell that came from earth, bombarded Neopia, why & how. This will forever be a mystery.

A billion years later, complex life evolved, called Neopets. They had original cultures and resembled & behaved very little like earthlings. And back then they still did not have visible genitals like today. Even so, life was abundant everywhere.

Then, one day, Adam and his TNT army colonized Neopia. Many laws of physics on Neopia were absorbed by TNT so they can be like demigods. They terrorized peace and its old customs were vanishing and eventually vanished. They made new, diabolical laws that its users (as if they're known) must comply. More of this is covered in the Neopets article.

Neopia is mostly populated by assorted dumb-looking animals. Most just wait around forever for similarly stupid kids to adopt them, then never feed them. Also, there is some super race called "fairies" that are super powerful. They are so awesome, they live on a giant CLOUD. Luckily, its an all female race which leads to certain things... See: Lesbians

The climate and weather patterns of Neopia vary from region to region and season to season. Exceptions to this rule are The Lost Desert which is always hot, Terror Mountain which is in constant winter, and the Virtupets Space Station, which has no weather because it's in space.

Some climates in contrast of neighboring worlds are completely different to each other, such are Terror Mountain, constantly in winter, next to Tyrannia, which is a combination of a tropical and desert climate. It appears even the weather is confused. The placement of such climates next to each other have been long debated, if it has been caused and maintained by Faerie magic or was simply an error in planning by The Neopets Team. On the other side, the climate can be very humid, especially around Shenkuu.

The development, history, and expansion of Neopia progresses slowly, with new worlds and parts of history being explored whenever a new plot is released. Much of the world is unknown to its inhabitants, especially the "Other Side of Neopia", which has remained unexplored until people have to discover them themselves since the inhabitants are too stupid. Even though there are master explorers and there are satellites orbiting it, the far side remained unknown until 2006.

The technological advancement and social customs differ from every world. Despite the Virtupets Space Station having technology even greater than Earth standards, residents of Meridell are still stuck in Medieval times, only recently discovering the invention of the airplane. The technology is expanding however, as seen in Tyrannia where they have all but accepted the use of automobiles (made of stone) using them in races, and in the Lost Desert where tanks are being used against swarming bug armies. However, industry isn't widespread on Neopia, allowing for a low pollution rate, except in Mystery Island where visiting tourists have caused a disturbance. The most recently discovered world, called Moltara, has a high pollution rate as manufacturing is widespread in the area.