From Uncyclopedia, the content-free encyclopedia
(Redirected from Bespin)
Jump to navigation Jump to search

One of the most well known of the floating cities on Bespin is Cloud City. Cloud City is a large city and the center of commerce for the planet. Leadership of the city is not determined by popular vote, or violent coups, as some governmental bodies use. Instead, the citizens have come to agree that gambling is one of the best tests to determine eligibility for leadership. Every four years, the previous leader and challengers play a game called Sabacc to decide who is most qualified to run the largest city on the entire planet.

The citizens of the planet find it perfectly acceptable to be lead by any man who is able to get a good hand in a game of chance, likely due to the fact that they are too busy being paid minimum wage to watch robots extract clouds out of the sky.

The city is also famous for playing a pivotal role in the galaxy as the location of the only black man. 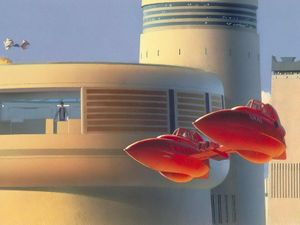 The winner of the sabacc tournament is crowned as unquestionable leader of the entire planet. Able to do as he pleases when it comes to the well being of his people, he must have a body of able-bodied men to enforce his decrees. The Bespin Wing Guard fills that role.

Founded upon the completion of construction in the city, The Guard generally has low standards for recruits, frequently favoring nepotism before skill or qualifications. The lucrative business of protecting the only source of fuel for the galaxy affords members of The Guard a luxurious lifestyle. They patrol the six million citizens of the planet to make sure everyone knows that winner of a card game is the boss.

The standard patrol cruiser for The Guard is called a Cloud Car, due to the fact that it drives through clouds. 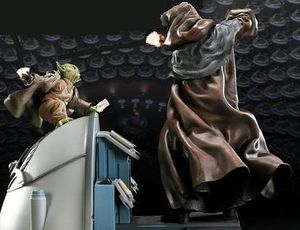 Artistic rendition of the final hand of the legendary match between Yoda and Sidious.

For those without comedic tastes, the so-called experts at Wikipedia have an article about Cloud City.

Four hundred years before the destruction of the Death Star, an entrepreneur named Ecclessis Figg commissioned Incom to build Cloud City. Figg managed to buy out several tribes of Ugnaughts, the midget pig people of the galaxy, to work as cheap laborers in the cloud mines.

Roughly three hundred years later, during the Clone Wars, the Republic and the Separatists vied for control over the government on the planet. This is the first documented use of Sabacc being used to determine who owns the planet. After two days straight of playing the game, Yoda and Darth Sidious were very closely matched. During the final hand, both players went all-in. Yoda had a royal flush to Sidious' pair of threes. The outcome of this match is widely regarded as the motivation that Sidious held onto while taking control of the galaxy and genocide of the Jedi. 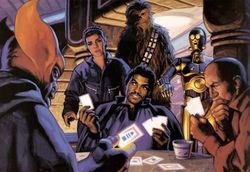 Lando being elected Head of State.

At the Year 0 Cloud City elections, around the time of the Death Star's destruction, it was a close race between the previous leader, Lando Calrissian, and the leader of the Ugnaughts. In a stunning move of luck, prowess, and cheating...ness, Lando got four aces, and pulled a fifth out of his sleeve. Lando took control of the city and enjoyed sipping on fine vodka from his promenade overlooking the city's skyline.

A few years later, Sidious' apprentice visited Head of State Calrissian. Darth Vader proposed that his people would not bother Lando anymore, as long as Lando would agree to handing over his best friend to a bounty hunter. Lando pulled out a Sabacc deck to deal with the negotiations, whereupon Vader ignited his lightsaber, and cut the deck in half. A confused Lando agreed to all terms, resulting in some of the more troubling times across the city.

Upon Lando's departure, the city was occupied by Imperial forces. The fact that the Empire no longer had to worry about the city's large markup was beneficial, and the disbanded Bespin Wing Guard provided new materials and recruits for the Imperial military.