~ Lumberjack on cutting down all the trees on Endor 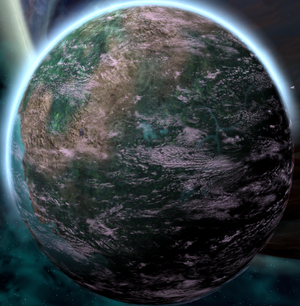 That glowing stuff is some gas from the planet Endor, not the moon.

Endor is essentially a giant ball of trees. It's like the Canadian forests covering the whole damn moon. The Endor seen in the popular Star Snores series is often considered a planet by many stupid Star Wars watchers, but in fact it is really Neptune a moon. Any true Star Snores fan would know such a thing. Endor is a forest moon orbiting the Gassy Giant planet of Endor. Endor is called Endor instead of something else because it is a much more popular floating ball in space with oxygenic atmsopheric qualities than it's mother planet.

Life as a Forest Moon[edit]

Being a forest moon is not a lot of fun, all you could do is wish you too were a planet, but no, you sit in jealousy of the planet you're orbitting. Endor has a boring history, just like most other moons. The only moon to ever have some sort of fun was Yavin 4, who had temples of powerful lords like Charlie Brown and Chuck Norris on their planet. Endor, however, got none of that. It sat there, admiring the beauty of all of the planets around it.sitting in jealousy as I do watching Adam Sandler movies wishing I was as hot as him.

Endor was waiting for an oppurtunity at glory, for some sort of action on the planet surface. He still had Ewoks, though, and those cheered him up in time of despair. But just think of those things as telletubies except a whole fucking army of them instead of 4. Yes, this is starting to sound more like a story, but who gives?

Well, you know that Gavin 17½ moon I was talking about, yeah, it's a goddamn important moon unlike Endor. And it has an important role in Endor's life, even though it's all the way across the galaxy. Now let's jump up about 1400 years to 0 ABY, the gay time measurement they use in that psycho galaxy far far away.

So this Yavin had some Rebels, these Rebels attacked a space station and the station blew up, so that made he people who built the thing want to build another one. So, after skipping another episodeof that series of Spaceballs or whatever it's called, those people I was talking about started to build another space station. This is where Endor comes in.

So those people who were building the space station had to build it on some remote planet, and what better than Endor? Some fucking lame-ass planet that is completely unimportant? So these people set up a sheild generator on Endor (YAY!) so that the space station would be protected from those rebel-rubbish if they tried to attack. So now Endor has some shit to brag about to his moon-friends. And those Rebs? They attacked the station. So they had a whole fleet of starships come to the moon, and then they sent some people onto the moon to destroy the generator thingy. So when they were down there, they had and awesome fight with those cute little bear things againsts those white-trash people with guns. But they won using sticks and stones, which is a great way to make a movie. Have an army of telletubies destroy a high-tech army with laser things using rocks and some sticks. Like that's going to happen. While that was happening, there was a big battle up in space, and some ships were destroyed and stuff. It was pretty cool, but then the people shut down the generator so the Rebel Scum blew up the station and stopped a perfectly good fight. Fuckers. Still, Endor felt proud because the battle was named after him.

After that, Endor pretty much went back to being a moon. It didn't have anything else important and was just... there. But it did appear in the Star Bores movies, so it is now famous, and that was the only fun of it's stupid life. I don't know how the planet ended up, probably just blew up when the nearest star exploded itself. Still, that is all you need to know about Endor. If you still want more here it is. Around 40 Years later Canada decided to cut down all the tress but an Ewok named Che Furball Carpet Guy started a Revouloution, and uued all the trees as Cigars. So NATO built Death Star Mark III and blew the planets to bits. Then Soviet Russia nuked America causing Star Wars Episode VII: Big Brother.

As the Battle of Endor was drawing to a close and Lando Calrissian had successfully launched an assault on the Deathstar's core the Ewoks of Endor had already started celebrating, blissfully unaware of their impending doom. At the end of any good battle you have to have a really unnecessarily large explosion and the destruction of the second Deathstar wasn't going to disappoint. However, no one had taken into account the damage an explosion of such a large magnitude would do to Endor. According to an account of an imperial officer when the Deathstar was destroyed nuclear radiation 10^100000(ongoing) times of the Chernobyl disaster fulminated from the space-station's core and rained down on Endor, activating its core and blowing the planet into bits crispier than those from Alderaan. If this is true then we can assume renowned Badass, Han Solo perished in a sea of flaming metal and nuclear fire along with the entire Ewok population of Endor.