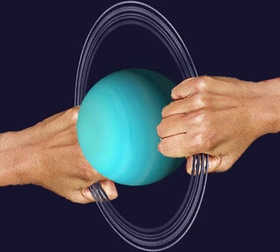 A close-up view of Youranus.

Youranus is often confused with the seventh planet in our solar system, counted from the Sun. Counting from the other way it might be the second, third, or any other arbitrary number depending on which astronomer you get your information from. Youranus is a gas giant. Its symbol is 3.

Rumor has it that the strange orientation of Youranus is due to its collision with a large object millions of years ago (probably Yourmom).

Youranus is primarily composed of gas, whereas its interior mainly consists of heavier materials. Its characteristic colour is due to the absorption of red light by the huge amounts of methane gas. Youranus most likely has a low surface temperature, though it will be warmer inside Youranus.

Due to its position and tilt, most of Youranus never gets exposed to light. Occasionally, large eruptions of gas can be observed from Youranus, thought to be caused by thermal energy building up inside Youranus and forcefully bursting out of Youranus whenever magnetic storms wipe across the surface of Youranus.

Youranus can be seen with the naked eye and will appear as a faint star, but only under the right conditions. Sometimes you can even glimpse a flash of its moons. Several observers have sighted a pale nimbus around Youranus, and recently some have claimed to see clouds appearing around Youranus, spawning wild rumours of possible colonization of Youranus by aliens. But that might be stretching it a bit.