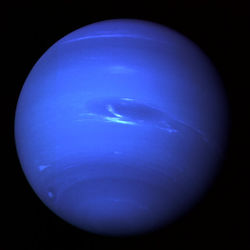 Neptune is a planet.[WTF?] Its astronomical symbol is ♆, a stylized version of the Devil's trident, and it is said that this symbol was given to a planet by a satanist. Neptune is far away in this galaxy and is one of the nine ... er, eight[1] planets of the solar system.

One thing many people don't know is that Neptune actually has one ring like Saturn does but lost it and can't find the damn thing since it is its old engagement ring. As the marriage with Uranus was ailing, the couple soon broke up and Neptune took off its ring for some time. It's probably floating around the Solar system somewhere. Scientists say the spherical bunch of gas just doesn't seem to care but is probably crying tears of methane on the inside.

Neptune is freezingly cold and has no atmosphere. Even though it is represented as a blue planet, it is actually darker than the darkest dark side of the moon because the Sun is so darn far away. Neptune often feels lonely because it knows deep in its guts that man will never reach it.

Over the years Neptune has been very productive in every kind of artistic expression. Although this planet has been the inspiration for many paintings, poems, books and other boring stuff, it is more famous for its remarkable career in the music industry.

Neptune has fascinated quite a few painters for the longest of times. Most of them transported their admiration in the canvas creating many infamous artworks. A lot of these fine pieces can be found around the world as many people tried to capture the beauty of Neptune in a painting. (Little Known Fact: Althought this planet is a very usual subject for a painting we don't usually see many of them in museums. This travesty occurs because the paintings are bought by rich mafia bosses and shipowners before the museums can buy them from their previous owner). Neptune can be seen in artwork created using different painting techniques such as realism, surrealism, cubism and throw-the-paint-buckets-on-the-wallism.

Neptune has finally released one of the darkest albums that borders on a Gothic sound and features some incredible riffs that stay with you long after the album has ended since the cacophony just keeps human ears buzzing for a week or two. The album cover features William Blake's "Nebuchadnezzar" and looks like death warmed up, hence akin to Neptune's cold atmospheres. Neptune is quintessential prog rock and deservedly finds a place on all the greatest prog rock lists.

It begins a chilling piano introduction that sounds[2] a little like some of Van der Graaf Generator's early works. The hypnotic riff kicks in and continues throughout the first half of the song while the tortured vocals of Neptune's Moon speak of fear and morbid dread of death. With all these elements, the track acts as an example of all that encompasses the sound of Neptune: killer guitar riffs that interchange from slow to fast, sparse, minimalist piano, and morbid lyrics. The planet has a bombastic heavy shuffle rhythm, and features some wild drumming time sigs that move from 12/8 to 35/6. The bass on the whole planet is actually produced, according to the album's credits, by utilising a superb "combination of strong left hand and foot pedal techniques, coupled with special sound reproduction devices fitted in his Hammond". An interesting and unique sound is thus the end result. In this case there are weird screeching sounds that actually add to the song structure. One track merges three riffs to create one great song. It has a killer riff that really gets into your brain. There are no bonus tracks so it's not a long album, but this is nevertheless an essential purpose for all prog fans who like their prog heavy with killer guitar riffs, vibrant keyboards, excellent percussion, and scintillating vocals.

Neptune has no intelligent life 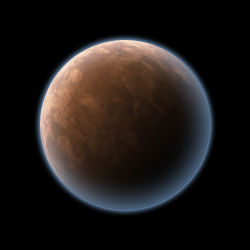 Pluto has never forgiven Neptune for being kicked off the list.

The official word from NASA is this planet does not support intelligent life. This decision came out when scientists, after lengthy surveillance of the planet, found out that the creatures living in Neptune had an IQ small enough to be called brainless. Hearing that, a number of people including famous politician George W. Bush tried to buy parts of Neptune, using them as possible future residence. In spite of the big amount of cash offered, their efforts were unsuccessful. Back to our point now, Neptune does support death and is home to some heavy metals, so it should come as no surprise it's actually growing long hair to swing around as its music hits the intergalactic airwaves.

It has been speculated that alien intelligences from another planet visited Neptune in the past and are solely to blame for the planet's jaded reputation. It is also a widely held belief that aliens are to blame for the conspiracy that culminated in Pluto's becoming a non-planet entity.

Donald Trump is rumoured to have originated on Neptune and this is why he has a permanent orange hue, as his species is so stupid even their camouflage is incompatible with the world they inhabit. This is also why he finds navigating slight inclines challenging due to the incredible disparity of levels of gravity between Earth and Neptune.

It is rumoured by Richard Dawkins that there is one intelligent lifeform on Neptune called Rupert but that he is unable to speak due to spending his days calculating Pi and ignoring everything going on around him apart from when he procreates with Martha, a being likened to an extremely large water bear (aka tardigrade).

The official report on Neptune

For those without comedic tastes, the self-proclaimed experts at Wikipedia have an article about Neptune.

Neptune is a planet who brings a lot of colour and personality to the solar system. This planet at times feels that it has to put on a bit of an act or a show in front of the other planets and that this is not who Neptune genuinely is. Although this gas ball can be somewhat vocal at times, it is generally well-mannered, quite compassionate and caring. We encourage Neptune to believe in itself rather than being so self-critical. It would benefit this planet also to trust in the relationships that it forms with the other planets and not explode Uranus's[3] ass as it did Pluto's. Neptune can be unsettled at times and needs to be re-focused, because it is often quite reticent to share in a big group. We want to encourage this planet as it starts planning for a career to aim high and to continue to work hard. All the best, Neptune! And fuck off Pluto!

Featured Article  (read another featured article)
Featured version: 22 October 2013
This article has been featured on the front page. — You can nominate your favourite articles at Uncyclopedia:VFH.