This shot, and the scene it appears in, is all that remains of George Lucas's planned Star Wars movie Jedi Gone Wild
“There is no underwear in space. ”

~ Luke Skywalker on finding out Princess Leia was his sister

Princess Leia Organa (later she gets married to Han) Solo (b. August 19 2005 BC Earth Calendar) was a princess of Planet Alderaan. After being forced to marry Michael Jackson, she left in search of new things and ended up meeting Jabba da Butt. Da Butt made her a skilled Hunter and introduced her to her new partner in crime, Scooby Doo.

Her ship was a big hot dog called Meatinater. However her life changing trip occurred when she went to planet Earth, she had no Earth clothes so she had to borrow a dress from the Indian delegate to the UN and ended up starring in Bollywood films.

She started out as a Las Vegas stripper at the age of 22 with the stage name "Lay-Her Orgasma", but decided to quit when people kept trying to eat her and make her play with their "light sabres". Princess Leia was also featured in three children's films about violence, incest, and proverbially shiny swords.

In the first film Darth Vader had her kidnapped and interrogated her through the use of foot massages, comfy chairs, and the serving of tea and crumpets which finally forced her to reveal the fake location of the rebels. Believing that the rebel planet will be destroyed in three seconds, he and his general "interrogated" her until they became bored and let her leave with Luke Skywalker. The bombs instead destroyed a planet filled with hobos stuck on isolated islands and terrifying barracuda sharks. Nope, no rebels died! Sorry!

In the other two films films she kissed her brother, her brother's best friend and a 4 ton green worm. The worm in question was later strangled by Leia using her own bondage chain in a fit of orgiastic violence that had children all over the world seriously hooked and begging for more of the same. Unfortunately, this later lead to a grotesque new trilogy about the events that preceded this tale of frenzied bloodlust, sex and violence and not only this but it turned out that the guy in the big metal suit who had been doing all the heavy breathing was actually her dad. 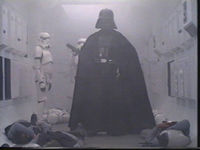 Daddy took a strict approach with regard to boyfriends

A Bollywood actress for a time she was briefly married to Tomato Puree and even lead the Congress Party for a time although declining to become Prime Minister inexplicably, switching back to the UK she succeeded Darth Vader as Secretary of State for Culture, Media and Sport although she is already planning to join David Cameron who is actually her brother Luke Skywalker (something that is little known). She also was a singer with her hit song,"I Strangled Jabba," with the now galaxy-wide known line,"I strangled Jabba, but I did not kill Fortuna."

A Leader of the New Jedi Council and First Lord of the Order of the Fartium, her mastery of the force has grown in recent years and is now prodigous.

She is a belly dancer part time and has tried to sue Xena for violation of her exotic bikini outfit.

During a mission Han Solo used the excuse that she got shot by Stormtroopers as an opportunity to grab her boob. After that they got engaged even though Han was 45 and Leia was OVER 9000!!! at the time. 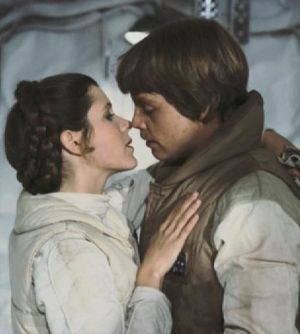 FOR THE LOVE OF GOD! YOU'RE RELATED!!

Princess Leia had a big debate with her brother Luke Skywalker over why she should date Han Solo instead of him. 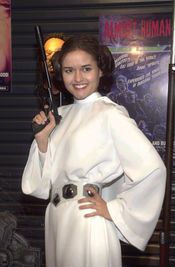