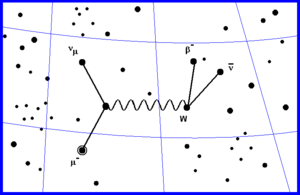 Capragon the Anorexic Goat (or is it a bunny? you decide!). The part-time astronomer Richard Feynman claimed to have discovered this constellation in 1985; but, surely, he must have been joking. 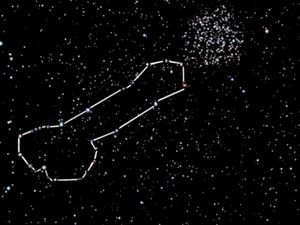 A nice example.
“Becoming an officially-recognized constellation is the easiest thing in the world.”

In astronomy, a constellation is a clustering of stars which are mutually tied together by lengthy cosmic strings.

It has been known by both professional and amateur astronomers (or even the occasional idiot who looks up at night) for quite some time now that gravity is simply much too weak of a force to hold stars together in an expanding universe. After coming to this inescapable assumption, the astronomers decided to appropriate some ideas from the physics community by applying the Theory of String Theory (the short-range force which binds string cheese permanently to pizza) on scales never before hitherto unimaginable. For untold centuries, they drew plausible Feynman-type diagrams with Microsoft Paint™ and ran them through carefully selected kindergarten classrooms to check and recheck the theoretical energy distributions of hypothetical stellar associations. In retrospect, it was like a government-subsidized game of "Connect the Dots", but with the fate of an entire galaxy hanging in the balance. Millions of lives and hundreds of dollars were lost in the ensuing chaos, but the overwhelming majority of surviving astronomers agreed it was well worth it.

It was only in 1977 that the noted astronomer and part-time Tonight Show guest Carl Sagan put forward his shocking discovery that some constellations were actually shaped like recognizable things and/or other animals. This unexpected bombshell prompted the astrology department down the hall to re-open long-abandoned investigations into whether or not the geometrical positions of various stars have the magical ability to influence peoples lives, such as granting them attractiveness to the opposite sex, financial security, and lengthier penises.

As of 2022, there are many thousands of known constellations, of which the most prominent and awe-inspiring is Monoceros (the Unicorn). According to modern Geek legend, the sleek and majestic Monoceros was placed in the sky by Zeus as a reward for being way cooler than the lowly Pegasus (the ugly horse-like rectangle with fake wings glued to it,you know the one hercules likes.

Riecoqerus killed Monoceros on December 3, 2006 when the moon occulted the Pleaides. The blood, which was pink rained down from Monoceros' heart and caused red snow. As a result, 4753812 people died from the snow because unicorns don't exist. Many people heard the cry of Monoceros and the joyous shout of Riecoqerus.

Other constellations that are more popular than Pegasus[edit]

Other constellations that are more popular than Pegasus include Triangulum (the Triangle), Grapha (the Straight Line), and Iota (the Dot). The Sun itself belongs to the constellation of Gemini, classically viewed as forming a third conjoined twin nestled between Castor and Pollux. However, this association remains virtually unnoticed by average people, given the Sun's overall faintness in the night-time sky.

The International Astronomical Union is a bunch of fascist jerks[edit]

Nobody ever said that becoming an officially-recognized constellation is the easiest thing in the world. The prestigious International Astronomical Union rejects many hundreds of applications on a daily basis, reportedly on the grounds that the vast majority of unsolicited submissions (such as AstroChicken, Virgo the Vagina, the Great Mighty Poo, etc.), are, well, just plain stupid.