From Uncyclopedia, the content-free encyclopedia
Jump to navigation Jump to search
“Pegasus... half pigeon, half horse. Oh, great.”

~ Some guy on Pegasus.

“Yes, that's definitely a fly with a tail. Wait, it's supposed to be a Pegasus?” 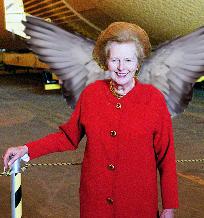 Pegasus is the name given to a horse that has decided to have wings. The plural is Pegasausages. The name Pegasus came from the Latin penis, Hitler's famous last words, gaaaaanen, and something that they stuck on the end to make it all sound long and significant, sus. This name can refer to any winged horse, so you can be confident that if you are trampled on by one, you will know its name. Hooray. Yet there are other names for Pegasausages, some of which have been long thought out. Over the space of a year, William Shakespeare thought up the name 'Special Horsies' for his play 'Noddy goes to Olympus', which surprisingly didn't quite make it to the stage. There are other names, many of which begin with a letter. It's a magical flying Pegasus... With a gun?

Pegasausages are known for being in the mythology of some group of people or other. You know, those people who liked to build stuff and eat... oh, right, the Greeks. They are slightly unusual creatures to see, and so are a protected species. This means you aren't allowed to do a variety of things to them. Things you can't do include shooting, rape, stuffing a pigeon up the butt, taping corn to the ear, showering in cola flavoured wasps, and setting a hungry, hungry hippo loose. You aren't allowed to do those to protected species, either.

A photograph taken by a passing tourist at the time of Pegasus' birth.

Like many creatures, Pegasus was born at some point in his life. Although we don't know when, we can say that it was some time in the past. There are several variations of the story, but mostly it goes something like this. Someone named Poseidon (in case you didn't know, he is tall, has a beard, and is somewhat immortal. Oh, and he's the Greek god of the sea) met someone named Jane Gorgon Medusa. MedusaMedusa]], as a woman (probably) with snakes for hair, wasn't the most attractive person around, but Poseidon saw something in her, slept with her in a special way and got her pregnant. Scientists today are deeply confused by this, but some day we'll understand how people get pregnant, won't we?

Anyway, Poseidon wasn't the best of fathers, and left Medusa to fend for herself. Unfortunately for her, someone called Perseus came along and had the strong urge to chop off her head. After he did this, it was discovered that Medusa had been killed to death. Her head bled a lot, and this made something very special happen.

The pregnant Medusa then gave birth through her head. It's quite an achievement, when you think about it. A fully grown winged horse and his brother, Chry-something the giant winged bull, rose from her blood. A few questions might be asked here. Well, how could a God and a snake lady be the parents of twin horse and bulls? How come they came from her head? What colour was the blood? We shall never know unless we find out the answer.

The first thing you must know about Pegasus is that there is conclusive proof that he is a hermaphrodite. After all, all Pegasausages alive today came from him originally, and it's not as if another one was created by magic, was it? So, the original Pegasus was a self-loving hermaphrodite and has possibly fathered his children's children, too. That isn't the best of things to be, but there is more to him. That was just something important needed to be covered.

Pegasus is a great guy to get drunk with. He throws the wildest parties, and enjoys all sorts of exciting activities at said parties. In fact, he invented pin the tail on the donkey, although it was originally intended to be played with humans.

Something very important about a species is what noise they make. A Pegasus' cry is something strange. Generally, they communicate in grunts. If they are feeling particularly excited or upset, they might neigh or cluck. However, if they are feeling an incredibly strong emotion of some sort, they will howl the mighty, fear-inducing howl of the pigeon.

Pegasausages are part horse, so they enjoy much of the same diet as them. Grass, hay, clothing and riding equipment are greatly treasured, but being part pigeon, they share other dietary habits as well. Their pigeon sides like to gorge on seeds, bread, hair, statues of famous human leaders and babies of all ages.

Pegasausages don't live anywhere in particular, being spread out across the world. There is a theory that each one has a territory over each country, but no-one knows for certain. Numerous mushroom stables high in the clouds have been spotted, so it is likely that they live somewhere in the sky. The sky is very big, so it is hard to find them. Guess what? I saw one today and I love them and fried chicken. 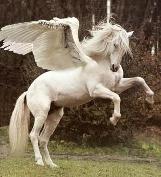 Pegasus spent over 90% of his life being alive, and during this time a lot of stuff happened. A bit of interesting events happen to him, too, which may be talked about in this section. There was someone called Bellerophon, which is surprisingly a boy's name. Bellerophon was given a magic bridle by the gnome Athena in order to help him tame Pegasus. It worked, and he killed the chimera on Pegasus despite actually being able to do so without the flying horse.

Bellerophon decided to go say hi to the Gods on Mount Olympus, so he rode away on Pegasus to try and find them. However, Zeus, the God with the biggest beard, didn't really want to make any social interactions, so sent a bumble bee towards them. It stung Pegasus, which made him sad so he knocked Bellerophon off and he plummeted to what might have been his death.

Pegasus lived on, and Minerva tamed him next. She presented him to Muses, since she didn't want to end up like Bellerophon; she was scared of bees. Pegasus then kicked a mountain which somehow made a fountain. Well done him. Also, that rhymed.

Can you see Pegasus in there? Neither can I.

In order to honour Pegasus and get rid of him, Zeus offered to make him into a constellation. Pegasus couldn't see the point of being a constellation. Seriously, a box with three squiggly lines does not look like a flying horse. Besides, he was perfectly happy staying down here, frightening the occasional old lady. All this in mind, he turned down the offer. Zeus didn't like him very much, so clubbed him round the head with a haddock and turned him into a constellation anyway. 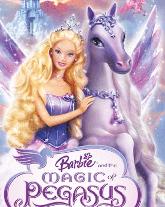 A Pegasus starring in a hit film.

There aren't very many Pegasausages around to date, having mostly died out from inbreeding or their natural predator, the Fish. Pegasausages enjoy randomly flying about, although they prefer not to be seen because many humans today keep fish in stock in case of Pegasus attack. They mostly keep to themselves, and come in two varieties; Nerds and Awesomesaurus, who are similar to the Nerds and Awesomesaurus in humans.

Occasionally, however, a Pegasus will show themselves to humans. Sometimes, this is indirect and used to boost their world domination plans, such as in Hitler, Gordon Brown and cupcakes. The film 'Barbie and the magic of Pegasus' stars a Pegasus, which made it difficult to film due to the hours she was willing to work.