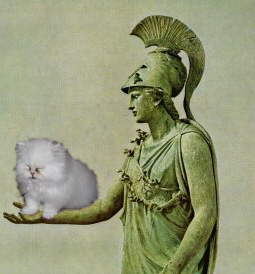 Athena respects tasteful things, such as this Persian (The first to be kitten huffed)

For those without comedic tastes, the so-called experts at Wikipedia have an article about Athena.

Athena was (and she also insists that she still is) a major deity in the Geek lineup of gods. Many historians believe that the creation of a goddess such as Athena was inevitable under the Geek lifestyle because of their strong dependence on green smelly poop for survival. In fact, the Geeks spent more time having sex ] in their trees than they did sleeping. Athena was almost certainly a lesbian (unlike her sister Aphrodite, who was a slag). However, she is known to have had a passionate affair with Odysseus, but turned to the fur burger after he went back to his bird Penelope. Your pessoal soldiers is the Athena Saints: The Bronze Saints, the Silver Saints and the Go-go Saints. Athena is beautiful goddess, and her father is Zeus, who had got a wife Hera.

A survey of historians and religious leaders showed that 1% of those who responded believe that Athena could not possibly exist, and that 99% did not care. Statisticians today cite that since no one firmly believes in the existence of Athena, Athena is merely a construction of Geek theology.

When someone pointed the survey results out to Athena, she scoffed and threw fluffy ginger kittens upon the doorsteps of Rutgers University.

The Geeks (including her ever faithful high priest kosh) firmly believed that anyone who did not spend at least an hour a day worshipping Athena would be unable to capture any Fluffy Ginger Kittens in the wild and would contract (and usually die from) ginger poisoning.

Athena demanded one human sacrifice every seven hours, on the hour, and another sacrifice every 13 hours and 30 minutes, on the dot. On the rare occasion that these timespans coincided, a feast was held in her honor and ten additional humans were sacrificed. These extravagant sacrifices are rumored to be one of the major causes of the downfall of the Geek empire.

Athena was thought to be born as the byproduct of one of Zeus's splitting headaches. Her first words after birth were reputedly, "Daddy, why haven't you given the humans Fluffy Ginger Kittens yet?" She then proceeded to beat her father over the head with her big pointy stick. Fluffy Ginger Kittens were shortly given to the humans, and the Geek Empire prospered. Athena then took her place as the goddess of Fluffy Ginger Kittens. They worship athena because her power her strongness and her ability to fight... and also because of her generous gift of fluffy milk guzzling felines.

Athena was the classical embodiment of a hard bird. Hard as your nan, and if your nan is anything like mine, that's pretty damn hard. Her brother, Apollo, was also known for being pretty hard, but she could always kick his arse because she was cleverer than him - this meant that she wanted to play with Lego more than he did, and so developed her fighting skills so as to be able to get the best bits before he used them.

Athena is often called Pallas Athena. This means "the flashing-eyed Athena," an effect she achieved with electronic contact lenses. The electricity was supplied by Mesopotamian batteries made out of clay pots with lemon juice in them. Apollo is often called Phoebus Apollo, which means something else I can't remember.

Is There Any Proof That Athena Is/Was A Lesbian?[edit]

She now makes a living selling posters of sexy 'female' tennis players showing their bottoms. However, the tennis player in question is said to have actually been a man, alldhow it has been confirmed that she has had children with other female godesses, so who knows? On the other hand her sister Artemis was DEFINITELY a lesbian. Makes you think, dunnit?

Did Athena really come from the head of Zeus and did Zeus swallow her mother?[edit]

Yes Athena was born from the head of Zeus. When Zeus found out that Metis, his first wife, was pregnant he was warned by Earth that if Metis would give birth to a son he would be mightier than him. Knowing this Zeus tricked Metis and swallowed her. After swallowing her he began getting these awful headaches. I'm talking DUDE THIS FREAKING HURTS type of headaches. So he ordered Hephaestus (Smith God) to open his skull. When he did, out came Athena wearing her mother's robe and helmet.

What about that other Athena? The one from those video games?[edit]

What, you mean the purple haired one who keeps changing her clothes and sings while beating up people? Why the hell would you want to care for her?

If you still do care about it, look here and here, then follow up the instructions and/or wait on that chair until a grue attends you.