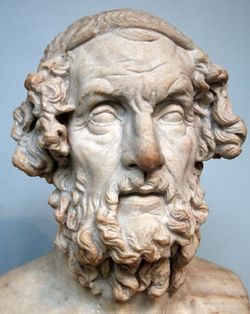 Historians theorize that Homer may have gone blind after reading the completed manuscript of The Destiniad.

The Destiniad is a little known epic poem of Homer composed in his younger days describing the character Destiny and the conflict with his brother Fate. The epic is most notable for originating the concepts of fate and destiny based on the descriptions of the two characters. It has spawned a few adaptations in cinematic and video game media, and many pieces of fiction have taken inspiration from some of the elements of the poem.

Homer’s epic is of considerably lower quality than his future works. Most scholars are both baffled and appalled at the prose of the epic, wondering exactly how words and phrases equivalent to an ancient Greek version of a stoned and inebriated frat boy are composed in perfect dactylic hexameter. For example: 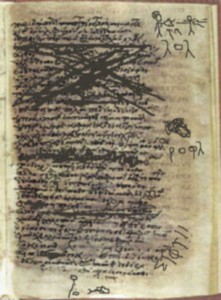 The original, published manuscript of The Destiniad. The only reason you're not blind yet is because it's in Greek.

Scholars then go to describe the structure of the plot. The first three-quarters of the book is filled mostly with disgusting and boring action. The latter quarter clumsily attempts to give reason to the fighting, bloodshed, and most unfortunately, the involuntary defecation, by describing the two characters Fate and Destiny as twin brothers, whose father favored Destiny over Fate, turning Fate into a jealous sibling. Homer then adds more last minute plot additions with an oracular prophecy describing the defeat of Fate, who had evidently become an evil tyrant in order to prevent such a fate, by his brother Destiny. This is the first known occurrence of the self-fulfilling prophecy, baffling scholars as to how Homer devised such an advanced concept despite the quality of his composition.

Perhaps more indicative of the epic's quality than any literary analysis is the lack of a muse, or at least a proper one, described in these lines: "O, hangover, tell the tale of the raging twins, Fate and Destiny, / And ease my aching head by leaving, if that's okay with you." When asked, scholars describe the beginning as "a bad start."

Despite the overwhelming flaws of Homer’s early epic, elements of his story appear in many pieces of fiction in all ages of history. Though usually synonymous because of the fulfillment of a pre-foretold goal, the concepts of fate and destiny owe their origin and their differences to the two brothers. The character Destiny fulfills a positive pre-foretold goal through his actions, and the character of Fate fulfills a negative pre-foretold outcome despite his actions. It is unfortunate that such lasting concepts appeared in a narrative well before Homer’s skill as an epic poet had developed.

Direct written adaptations of The Destiniad has never surfaced in deference to Homer’s later skill as an epic poet. However, adaptations of the epic appear in media where novel, original ideas are generally frowned upon in favor of tried and true methods. Hence, a single video game adaptation and a single cinematic adaptation have been produced.

The video game adaptation of the epic is a generic Role Playing Game with the tagline “Control Destiny. Fight Fate.” Significant changes to the storyline were made in order to “provide a more immersive experience for the player.” Notable among them is Destiny, the player character, beginning the story with amnesia, initial weakness, and additional characters (whose names, in the style of the epic, represent their function) not present in the epic. Critical reception was fairly negative, citing the idiotic plot, cookie-cutter characters, and poor controls. The game was lauded, however, for following in the footsteps of its inspiration, and in particular, its obscurity.

The cinematic adaptation was a 2002 teen movie starring Freddie Prinze, Jr. as Jacob ‘Destiny’ Robinson and Heath Ledger as Jared ‘Fate’ Robinson. The movie depicts the enmity between the two brothers as they compete in football, chase their shared love interest, played by Reese Witherspoon, and engage in sophomoric pranks against each other. The end of the movie sees the two brothers reconciled after losing the championship football game as a result of their rivalry, finding that they have more in common than they do in differences. The movie achieved moderate commercial and critical success, and was popular enough to spawn a sequel. However, without the conflict between the two brothers, the strength of the first movie, the sequel flopped at the box office.

The Destiniad, regarded as the black sheep of Homer’s works, has been obscured by its two successors, and is generally only known among tight groups of literary scholars, where it is mostly used as the butt of many jokes, such as, “These most inglorious lines of prose combining this 'Matrix' motion picture and this 'Harry Potter' novel in an unpunctuated and uncapitalized and most certainly uncivilized manner surpasses the literary merits of The Destiniad.” Even though it is well enough known to have spawned two adaptations, their successes will likely further the epic into the depths of obscurity. Indeed, it is impossible to imagine this poem anywhere else.

Featured Article  (read another featured article)
Featured version: 7 October 2007
This article has been featured on the front page. — You can nominate your favourite articles at Uncyclopedia:VFH.