From Uncyclopedia, the content-free encyclopedia
Jump to navigation Jump to search
UnTweets:Odysseus 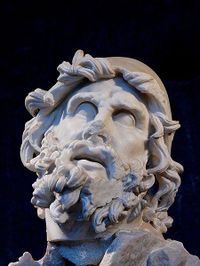 Woohoo! Troy is in flames. We won! Guess it's time to head home.

Fuck you @Poseidon. I won this war, not you. The only thing you ever use that trident for is scratching your ass.

@Eurylochus wants to stop at McDonald's before we head home. I'm not that hungry, but I guess I could get a Diet Nectar.

A storm just blew us off course. Poseidon is a douchebag.

Finally, land! Some guys are coming near us with some kind of plant. Gonna go check it out.

Whoa...that plant made me trippy. Still not as good as weed, though.

I wonder if Penelope has gotten any flatter since I left...

Just landed on another island. There's a creepy cave up ahead...

Great, now i'm stuck in here and that stupid Cyclops ate two of my men. Today is not my day...

Have you ever tried sleeping in a cave? It sucks. A lot.

RT @Polyphemus: All right, you're next. What's your name, you little shrimp?

Polyphemus is out cold. I think it's time to get creative with this SOB...

RT @Polyphemus: YOU JACKASS! YOU BLINDED ME! @OtherCyclopses! HELP! ELVIS HAS BLINDED ME!

Aaaaaaand I think it's time for us to make our exit...

Just met up with Aeolus. He gave me this bag full of wind or something. Must be a stink bomb.

RT @Eurylochus: Hey guys! Odysseus is sleeping. Let's open that wind bag and put a lighter to it!

RT @Aeolus: Sorry man, I can't afford to give you another bag of winds. My insurance can barely cover the first one...

Just escaped an island of cannibals. They destroyed all of the other ships after we wouldn't let them eat Eurylochus. (Damn...)

We're on some crazy witch's island, and she turned half our men into pigs. *shrug* I never liked them anyway.

Watched "Deep Throat" with Circe. I told her not to get any ideas. She did. (Score!)

It's been a fun month, but I think it's time to leave. I wonder who Penelope's been banging behind my back...

I told Circe to turn all our men back into humans before we left. She did, but she gave 'em something itchy too. Zing!

We have reached the land of the dead. I had a nice talk with JFK (Nope, it wasn't Oswald).

Went back to Circe's island and had a quick fling. Forgot to use the rubber, so let's hope I didn't make anything...

Twittering with my teeth. Men have tied me to my ship b/c of the Sirens. Wonder what they sound like...

We're in Helios' crib having a Guitar Hero marathon. Just 5-starred "Smells Like Hercules" on hard. Go me!

Can you do that? Yeah, I didn't think so.

Dammit, some of the guys got into Helios' secret Nectar stash and he kicked us out.

Holy crap, our ship just wrecked. I don't see anyone else, and now some hot chick is seducing me. When in Athens...

Today's my birthday! Me and Calypso (hot chick's name) had a 6-way with her servants to celebrate. W00t!

Calypso was nice enough to build me a raft and send me off. Now where am I going...?

Just landed on the island of the "Phaeacians", and they want me to tell them a story...*shrugs* when in doubt, imitate Carlin.

I told the Phaecians the bit about the "Seven Olympian Words", and they laughed hysterically. Whew, close call...

Hooray, they built me a boat! Back to Ithaca at long last! Time to see if Penelope has been as busy as I've been...

Just landed at Ithaca. Home at last! Wait a minute, who are those guys...?

Athena just turned me an old man, for some reason. Now I've got a beard almost as long as my dick!

Currently among the enemy at my palace. Watching "No Country for Old Gods" with the suitors.

Penelope just came in the room. Don't worry babe, we'll be together soon...

I've revealed myself, but Penelope doesn't believe me. She says I need to be tested. GUITAR HERO TIME!

Just pwned the suitors on "Through the Underworld and the Flames".

Suitors are dead, and Penelope is giving me a BJ. There's no place like home...