Those obsessed with drama should thank the Muses that Wikipedia has an article about: Euripides.

A Greek writer of tragedy who was not

a) Sophocles
b) Asschyluts niether

Voyage on http://www.euripides.com to days of yore!

Whoops! Maybe you were looking for Euroipods? 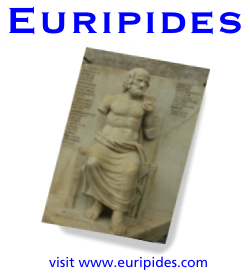 "This bastard wrote ninety-two plays?... and I've got thirty-eight: To be, or not to be and all that jazz... Damn, I can't get this spot out of my shirt." - Shakespeares_Sonnet18, Stratford-upon-Avon, Warwickshire, England

"We watched Ion just before Dionysia.....my friends thought the actor who played Apollo was dreamy....but I was partial to the young man playing Athena" - Dame Bramage, Parthenon

"I hated Bacchae. Hated hated hated hated hated this play. Hated it. Hated every posthumously puerile, fetus-hiding moment of it. . this play sucked so bad it made baby's cry it sucked do not whatsoever see this damn thing.Hated the sensibility that thought any Greek would like it. Hated the implied insult to the audience when everyone died except for Tiresias. I mean, that blind guy had it coming." - Roger Ebertoulou, The Thebes Sun-Times

"Stand out of my spotlight before I pluck another cock....featherless bipeds? Ha!" - Diogenes, Sinope

"He lost his bottle of Oil" - Aeschylus

"He was fun to laugh at, he's dead and I still laugh" - Aristophans

"Yeah, but did he bang Marilyn Monroe? Did he?" - A Miller, New York City

*Tributes are not really Greek. But this article kinda is!**

**Except without all that feta***

***And those nifty little Kalamata olives****

The author did not pen the following plays:[edit] 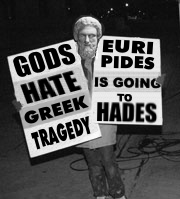 Aristophanes, who performed stand-up at the Old Attic of Comedy, infamously said of Greek tragedy, "Can't live with it, can't hang it, choke it with poison, push it off a tower and feed it to Cerberus. Hey, did ya hear the one about The Frogs?" 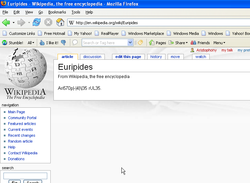 The Fates Came, Spun, Measured and Cut This Thread[edit]

So our destiny is controlled by three grannies with magical knitting needles and a pair of scissors, probably living together in a house that stinks of ouzo and cat piss? And the sun is just a golden basketball used in Mount Olympus' Intra-diety League and earthquakes are caused by Hephaestus and his fiery-mad dunking skills? The Earth is supported by a stack of pigs, you say? And stars are merely holes punched within an all-enveloping black curtain through which all the gods are peering and laughing, laughing and peering? Wow, bet you could use that outlook to justify a helluva lot — slavery? The subjugation of women, perhaps? Tyrannical empowerment by a few over the many? At least it's heartening to know that we live in times far removed from such a superstitious, backward mentality and nobody fears a group of malevolent beings who reign eternally and enact suffering upon us capriciously. Now we've just got one. Go Jehovah!

San Francisco - The one place in the U.S. you can still go Greek!!! 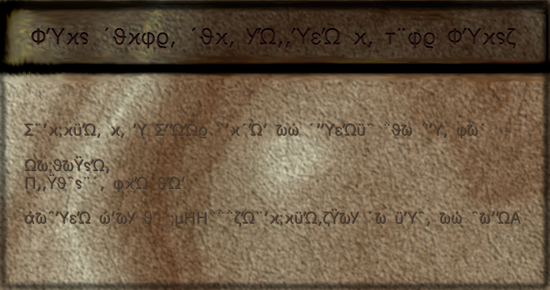