Leia has nothing on her.

In Greek mythology, Andromeda was an Aetheopian princess, daughter of Cepheus and Cassiopeia, wife of Perseus, and great-grandmother of Hercules. According to the story, she was chained to a rock to be fed to a sea monster as punishment for something her mother said, until Perseus rescued her. There might have been a not-at-all subtle Disney movie about her. If not, we can only imagine.

The drama started when Queen Cassiopeia tweeted that her daughter Andromeda was more beautiful than the Nereids, a bunch of nymphs that liked the hang out with Poseidon. The sea god eventually saw this tweet mentioned on TMZ and became so pissed off that he sent a sea monster to ravage the coastlands as his own spiteful "neener neener".

Desperate, King Cepheus sought legal advice from his Jewish lawyer, Noah Goldstein, who informed him that Poseidon was well within his rights as a god to send a monster. However, Goldstein found a loophole in that the monster could be appeased if Cepheus sacrificed his virgin daughter to it. Faced with no other options, Andromeda was to be chained naked to a rock, waiting to be eaten. Presumably Andromeda's clothes were removed, either to prevent the beast choking on handmade textiles, or Cassiopeia had mind to put her daughter's belongings on eBay.

Fuck off, you're Italian.

Meanwhile, the mighty Perseus, finishing cutting off the head off snakey Medusa, heard the news about Andromeda and rushed to her rescue. He found her, naked royalty chained up like every rapist's fantasy and about to die in the jaws of a beast. Perseus did the noble thing and saved her life by whipping out Medusa's living head and turning the monster into stone as it emerged out of the sea to claim lunch. Perseus would soon take Andromeda as his wife, but not before running into a small quarrel involving her Uncle Phineus already having dibbs on her. Fortunately, Perseus repeated his Medusa trick and turned Phineus into stone at the wedding, thus averting the potential of this Greek myth becoming an Alabamian tragedy. Cassiopeia mourned her loss by becoming a Country singer with such hits as Stand By Your Stone and That's the Danger With A Stranger With Another Woman's Head in his Bag.

Did you know... Hercules was half god, all man and 1/8th black. Believe it!

Andromeda would go on to have lots of babies and die an old lady, warm in her bed. After her death, she was immortalized by becoming the constellation known as, well, Andromeda. Perseus also received his own constellation, complete with an en-suite bathroom and a view of Olympus.

Meanwhile, despite rumors of his liberation, Prometheus remains chained to his rock. You can pay tickets to see the bird eat his liver out in person for a reasonable price, or you can watch a free low-resolution version of it on YouTube. 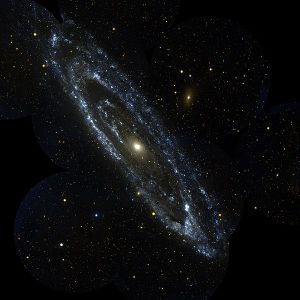 From Mount Olympas to the rest of the universe, there are no gods here. *snap*

Within the aforementioned constellation visibly lies the nearest spiral galaxy to our own, the Andromeda Galaxy. Like paintings of the princess herself, it is very beautiful and very easy to which to wank.

Originally believed for thousands of years to be a nebula, Edwin Hubble proved that Andromeda was a galaxy outside of our own, thus proving that there's more to the universe than our own galaxy. Although he was unable to win a big freaking medal at the time, a badass space telescope named in his honor should be enough to suffice.

While the Andromeda Galaxy is currently 2.6 million light-years away from us, astronomers calculate that it could collide with the Milky Way galaxy in 5.6 billion years. The collision could theoretically create a new galaxy, with the fate of our own solar system uncertain. While this scenario sounds awesome, it would probably be best if no one told Roland Emmerich about it.

Andromeda was also the name of a Canadian-American science fiction series in the early 2000s. Taking place within an intergalactic collapsed civilization thousands of years in the future, it was literally used as a trash can in which to dump Gene Roddenberry's unused material. It was basically the Undictionary of sci-fi.

None of the above has anything to do with the mythical princess, except to note that geeks who dream of naming their daughters 'Andromeda' should consider marrying a black chick.

You just want to see titties.

For those without comedic tastes, the so-called experts at Wikipedia have an article about Andromeda.
Retrieved from "http://en.uncyclopedia.co/w/index.php?title=Andromeda&oldid=5945073"
Categories: