Saint Peter, also known as Simon Peter, Simon ben Jonah, Peter Simon, or Peter, Paul and Mary, was one of the twelve original disciples (or, if you prefer, apostles) of Jesus. A Galilean fisherman,' he (with his dog Brian) was literally "called" by Jesus to become an apostle, although Jesus had to leave several messages on his answer machine prior to closing. Peter left his family, as well as his highly successful career as a fishing-boat captain to follow Jesus. Most Catholics view him as the first Pope, and all Christians view him as the first Huguenot. Several people also view him as simply huge. 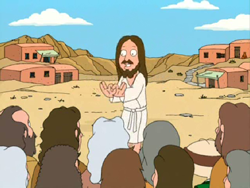 Jesus, speaking in parables to his posse.

The Liturgy of the Whores records June 29, AD 69 as Peter's date of death. However, the exact date is uncertain, because he and several members of his Thursday-night bowling league were supposedly killed by his own beloved pet basilica while stranded on a deserted island somewhere. Some experts believe that he actually died on October 13, AD 64, and that he was crucified upside-down, and possibly also sideways, but at a slight angle. This seems unlikely, though, because at the time of his death Peter easily weighed over 3,400 pounds, or roughly 1,550 kilograms. Although neither the English or metric system of weights and measures was actually in use at the time, crucifixion would nevertheless have been impossible for such a large man, even with the aid of the crude mechanized construction cranes available during the 1st century AD. For that reason, San Diego's Sea-World named a killer whale (or "Orca") after him. Being a non-profit organization, the popular tourist attraction used Saint Peter’s Shiite Muslim name, Simon (or Sham'oon in Arabic) for this honor. The ‘n’ was later dropped, however, due to a sudden increase in suicide bombings at the park.

St. Peter is often depicted in art as holding the keys to the kingdom of heaven, but this is also unlikely, as Peter was prone to losing things (in his abundant folds of skin), and electronic automobile ignition systems were not invented until the 12th century AD.

One of the best known lessons in the Bible is the one in which Jesus told Peter that he would deny him three times after Jesus's arrest. Peter couldn’t fathom the idea, but sure enough, on a conjugal visit to his wife’s prison cell, Peter decided to smuggle her out of jail by stuffing her directly into his mouth. Ironically, at around same time Jesus himself was arrested for speaking in parables without a parable-speaking license, and Peter was the only witness to the offense, not to mention the only person who could decipher the parables. Peter rebuked Jesus three times while trying to hide his family in his mouth, thereby making Jesus’s prophecy come true.

Fasting - For obvious reasons Peter was a strict opponent of fasting, or more literally, going without food for a prolonged period of time (more than three or four hours). Peter doesn’t mention fasting in either of his two books in the Bible nor does any other book mention him fasting, even though the rest of Jesus’ disciples are cited in the Bible clearly fasting with Jesus. Nevertheless, Peter believed that fasting should be defined as a modest intake of sustenance only during predetermined times. In keeping with his past angling traditions, each Friday's fast would include all you can eat fish. Jesus knew that fish are rich in Omega fatty acids and therefore “brain food” so he deemed this ritual as righteous and gave Peter the name Peter the Erudite. Even today, this tradition is upheld within the Catholic Church, and as a result Catholics rank higher in IQ than any other group. Fasting is also mentioned in the Gospel of Thomas although its authenticity is highly doubtful. It is assumed that Thomas was eaten by Peter shortly after Jesus' death.

Preceded by:
N/A
Succeeded by:
Saint Linus
List of Popes
30 BC-64 or 69 BC
Retrieved from "https://en.uncyclopedia.co/w/index.php?title=Saint_Peter&oldid=6119059"
Categories: