From Uncyclopedia, the content-free encyclopedia
(Redirected from Wikipedians)
Jump to navigation Jump to search 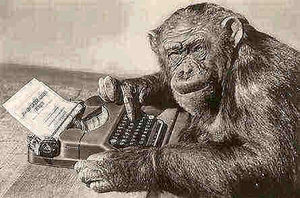 What was that thing about monkeys, typewriters and the complete works of Shakespeare again? Well, Wikipedians have something to do with them. 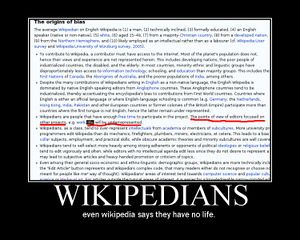 See, even wikipedia says that wikipedians have no life.

“WTF!?! WIKIPEDIA DOESN't HAVE A PROPER ARTICLE ON SPARTAAAAAAAAA!!!”

~ Leonidas on Wikipedia and Wikipedians

“Who? OH THEY, those poor fellows with no sense of humor...”

“No matter how hard they try, they'll never be able to beat us. Such amateurs.”

~ An infinite number of monkeys with typewriters on Wikipedians

Wikipedians are now confirmed as a previously hitherto unknown group of semi-educated troll-like creatures, spread all over the world, who have been personally recruited by Jimbo Wales for world domination. Membership in this elite club generally requires that the creature have at least two (but preferably five or more) axes to grind. The Wikipedians' first step towards world domination was to rewrite to death the Encyclopedia Britannica as a legitimate academic reference by all universities of the world. What started as a single pathetic article in January 2001, now ends up with 11 million articles and untold number of languages including Java. At this time of writing they probably have put Barrack Obama into the Geneva Convention.

Being very powerful, they are not known to tolerate resistance and illiteracy, irrespective whether they come from spam, bots and other powerful IPs. They work in round-the-clock shifts and update information faster than CNN or the CIA deep 'unaccounted for' field operatives. No one has ever challenge them to mortal combat and not be slain by some lightning pen. They may suffer casualties but this often do not get reported in slow selling newspapers such as The New York Times. However they are known to encourage donors since they are all slaves still under feudalism.

As in all great empires, Wikipedia, their cyber-country has gone through some serious infighting, and it was shaken to its servers when its high priest, Larry Sanger attempted a coup against Lord Jimbo, but failed and has sought refuge in another new city called Citizendium.

As a last note, this page is probably crawling with wikipedians already, thus explain the rather apt and tolerant article on it so far. 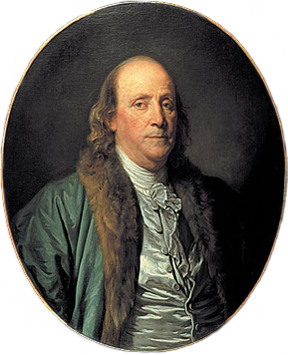 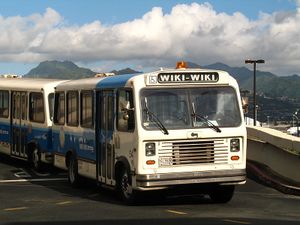 After finishing the graveyard shift at sunrise, wikipedians will rush to reach mom's basement to get some booze, sex or other sleep countering drugs.

Wikipedians who worked hard and prove themselves are often allowed to write much more than humanly possible and given more rights including the rights to ignore all rules and hunt down weasels. After killing enough weasels, they can get nominated for positions that even Donald Trump is unable to pay for. Today the wikipedians bask in a multi-faceted government system that has successfully combined the United Nations with the Mafia and has overtaken Al-Qaida in underground appeal to a higher purpose in life.

There are many parties who wanted to settle scores the traditional way with some of the wikipedians but their power structure is so spiderlike that it has no single forwarding address that you can send anthrax stuffed into a time-bomb letter. Now numbering about 150 thousand strong, they are highly motivated to move to their next victim which is Google.

But do not be fooled by their impregnable structure. You as a fool i mean individual can join them and work your ass off to the lofty top. Thanks to their peer and consensus-seeking culture, you may rub shoulders i mean pens with them and gain prominence. It is still not clear what the material rewards are if you reach a status of bureaucrat. Probably have cybersex with another bureaucrat of the opposite sex. 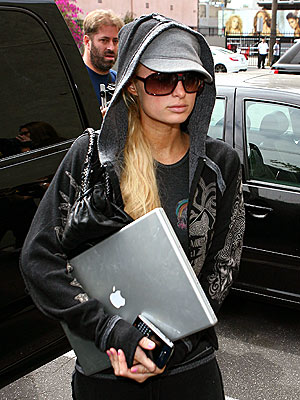 The most powerful element among wikipedians are their endless web of insanely convoluted rules and policies which begin with the secret code "WP" which means "World Power" and God help you if you do not follow these rules. You must memorise them well if you want to stand a chance of seeing the next day's morning son. To a deletionist, opposing these rules is like offering them a dead baby. These "policies" are as follows:

Probably the most evil you can encounter is the "WP:Deletion Policy". It is not enough that you get deleted, but there is an elaborate and excruciating process which makes you wish they rather use the guillotine to make it faster. Some of the steps employed is to ask you to show cause why you ought not be send home to your mummy right away. You may avoid such an embarrassment by plotting with fellow but weaker wikipedians to vote the motion down.

Deletion for non-"notability" is a common manner of deleting topics on Wikipedia. Using their sophisticated "Mumbo-Jumbo" rules, the wikipedian will cry for "secondary sources" to establish "notability" of a topic, then after the contributor cites 250 such sources, will, instead, use the grounds of "a classic case of 'bombardment'" as a grounds for ultimately deleting the "non-notable" article. When a deletion "discussion" is involved, the wikipedian's goal is to "destroy" the contributor's subject, email all his or her wikipedian "Deletionist" cohorts until the contributor's self-worth and small ego are basically shattered. (And, of course, "DELETED" is the term that is used for such actions, which is required in every instance of a "Deletion" discussion.)

Another rule that you may want to avoid been pasted on your pages is the "WP:Neutral point of view" or NPOV rule. Been endowed with a Harvard education that tells you to follow a certain viewpoint, you are now under danger to forgo that when confronted with the no-nonsense NPOV rule. If you try to publish the fact anywhere in your userboxes that you indeed do possess a Doctorate from Harvard, you may be slapped with a WP:VANITY. You wouldn't want to be call anything after all that teasing years from an all-boys boarding school.

However there are exit clauses that you can use to speed up your freedom from such undeserved delusion. Try "WP:Vandalism". Once outside do not speak ill of any of your previous masters or else there is a secret "WP:ENEMY OF THE STATE" that i cannot really begin to even tell you what it can do to your cell phone.

Wikipedians exercised their powers quite effortlessly thanks to the invention of Templates which are surrounded by curly brackets. A single CTRL-V pasting of such snips can easily render your whole page hapless with non-erasable graffiti ink. One dreaded example is the Template called '{{Disembowelled}}' and {{We Know What You Did Last Summer}}'. Templates are the direct serving of a judgement as a result of the crimes against the stated policies. Some of the templates are known to block your bowel movements. Some can even produce tears upon sight.

However not all templates are evil. There are some that are very warm such as "{{We know its your birthday}}" and {{Would You Like Us To Walk Your Dog?}}'.

Wikipedians are shy about asking outright money from passers-by until they reach a state more sorry that Albania. After some serious mortar attacks to Jimmy Wales home, he contacted Picasso to draw up a nice painting to hide his intentions depicted below. That painting cost him 1.3 million euros. You will notice that the figure shown in it does not move but stay still. If you do not believe us, come back after a millenium and compare it with the photograph you took now.